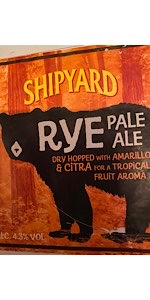 Rated by FZR23 from Romania

Reviewed by qrazvan from Romania

Rated by Dave-H from England

3.22/5  rDev -12%
look: 3.5 | smell: 3.25 | taste: 3 | feel: 3.75 | overall: 3.25
Pours a filtered clear reddish brown with a lowish off white head that did not leave more than some spots of lace. Nose (labled as dry hopeed with amraillo & citra for a tropical fruit aroma) is better than a bad beer, but doesn't really impress. Mild canned fruit cocktail, but overall soft. Taste is initially a bit off. After a few sips, seems to be okay, with light hoppy bitterness, maybe some spice from the rye, but overall does not impress. Better than a really bad British ale like something from Green King, but not something I'll have again likely.
Dec 04, 2016
Rated: 3 by windowside from Germany