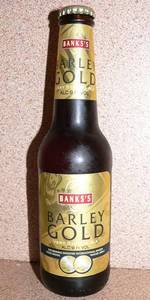 S & T - dull muted caramels and toffees, not good. Quite stale and nothing else to report. Pass on rich flavours associated with barley wines.

M - light carbonation and all too thin.

The nose is weak: some sweet notes (sugar and caramel), but otherwise nothing but hints of alcohol and the can it came out of.

Taste: Semi-sweet malts with a hop undertone that rises up towards the end of each sip giving a pleasant bitterness to an otherwise unbalanced drink. There is however an unwanted metallic aftertaste that ruins everything.

The whole metallic feel has balls up this tasting.

I really wanted this to be a good beer for me: sadly that isn't the case, maybe others will find it more wholesome to their taste buds, but I doubt it.

3.55/5  rDev +12%
look: 3.5 | smell: 3.5 | taste: 3.5 | feel: 4 | overall: 3.5
Pours a robust and very pleasant deep golden orange colour, with a filmy head of white suds. Leaves some pretty pleasant lacing down the edges of the glass, but certainly lacks volume. Looks very heavy, which is good, with a good amount of static carbonation when it's swirled. Looks pretty decent.

Quite robust on the nose as well, with a good welling of deep malt characters and a sharp, slightly surprising metallic note. But of English burlap sack, but that's probably being a little derogatory. Not bad.

The taste brings it together nicely, with a welling bitterness and a sharp metallic, almost acetone character on the back. Slightly medicinal, which isn't unpleasant, but rather accentuates the strength of the beer otherwise. It doesn't have a huge amount to back it up, but it's pleasantly strong and aggressive. Mouthfeel is thick and smooth with a burgeoning sparkling throughout.

A very decent brew, but it does swerve a little towards the harsh properties of malt liquor in some respects. Sure, it's strong and aggressive, but it feels like it might not just have the characters to back it up.

Reviewed by seanyfo from Scotland

S- Rich toffee malts, faint toasted quality with some treacle. Very faint perception of alcohol, maybe very slightly sherry like. I can imagine the malt aroma would be more intense if fresh.

T- Toffee/caramel malts with a faint biscuityness albeit a bit subdued. Underneath, the alcohol comes through very subtley in the finish and lingers on. Malt very much the dominant force with no apparent hop note to my palate

D- A nice malty sipping beer but i cant help but feel it may have been better and more luxurious fresher. Still a nice example.

Reviewed by FreshHawk from Illinois

T - Opens with a good amount of caramel and toffee malt. Then some more fruity flavors come out. A lot of citrus, particularly orange, and some other citrus and tropical fruit flavors come out. Accompanying that is just a slight citrus and piney hoppy flavor. The finish is an herbal and fruity alcohol heat taste. The alcohol is fairly present but fades a bit as the beer sits and warms up.

M - Medium body with slightly below average carbonation. A touch slick although the flavors stick to the mouth. Smooth.

D - Fairly good, especially after it warms up a bit more. Good amount of fruitiness and sweetness but well balanced overall. Aside from the alcohol being a little strong and warming, it goes down easy. Obviously ABV limits how much you can drink, but it is a decent fruity, boozy sipper.

Notes: At first the alcohol was a little strong and it drank a bit like a sherry or a fortified wine. Toward the end of the bottle, that started to fade and the malts and fruit started to come out more and a slight hop taste was uncovered and took over a bit for the alcohol. Hard to really decide which style it is because it has a number of flavors that are pretty well balanced. A very nice beer that is a nice fruity sipper. Not the most memorable, but nice and worth a try.

Reviewed by vancurly from Australia

Sticky, but spiky from the bitterness. Slightly hot, but nicely balanced.

Quite a nice strong beer. Probably only have one at a time, but would work as a nice fire-side ale.