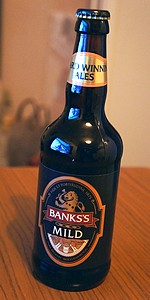 Reviewed by M_C_Hampton from Georgia

Reviewed by CwrwAmByth from England

Poured into a straight pint glass. A clear chestnut-brown colour with medium carbonation. Forms a decent head of frothy off-white foam that lasts for a minute or two before dissipating. Aroma of grainy caramel malt with hints of husk, faint roasted malt, fruity ale yeast and stewed leaves. Unexciting.

Meh - nothing special. No technical flaws as such, but this aims for mediocrity and hits the target. Looks OKish, while the aroma and flavour are a blend of dull caramel malt, weak roasted grain and ale yeast. Body is lacklustre, even for 3.5%. Drinkable but decidedly average. No need to seek it out.

3.5/5  rDev +4.8%
look: 3.5 | smell: 3.5 | taste: 3.5 | feel: 3.5 | overall: 3.5
This is the first lighter-coloured Mild and one of the very few examples indeed that I have tried during my short years of beer adventure, but it was consumed in a historical pub in Manchester City on cask. I remember it being a creamy (poured using a sparkler-fixed swan neck), malty brew with a sound acidity and mild hop resins to boot. Surprisingly refreshing it was. Today I found it in its bottle version available at the local Lidl supermarket, and thought it’s time to revisit it in a fresh light~ Coming in a 500ml brown glass bottle, BB 31/01/2014, served cool in a straight imperial pint glass.

A: pours a dark tawny to chestnut-copper hue with very good clarity and fine carbonation, topped with a slowly dissipating beige frothy head. The colour seems to suggest that it stands in b/w one’s traditional Dark Mild and Pale Mild – a “Tawny” Mild??
S: the aroma is almost like a German Altbier! For, the lightly floral hoppy and lemony notes typical of a lagered German beer using Hallertau-like varieties come in abundance, lifting the body of otherwise aromatic burned malts and deliciously nutty gristy malts… So fragrant that I don’t actually remember having it in this manner… Acidity from hops and yeastiness balance off the malt sweetness just nicely.
T: now it tastes like an Altbier with much less acidity on the palate… the foretaste consists of mainly light-bodied nutty malts, which are surrounded by sweetened roast-tea-ish aroma, finishing on mildly liquid-caramel, liquorice, and boiled yum-like notes (quite likely from pasteurisation). In the finish the burned malt aroma lingers pretty well, while a dry-ish touch also manifests on the rear of the palate.
M&O: overall moderately carbonated but sometimes it does taste a bit spritzy, this medium-bodied, low-gravity Mild (Dark or Pale, or Brown!) is simple, fairly drinkable and in many ways drinks a bit like a German Alt, albeit with much less complexity and lower acidity. Likeable, a bit watery to be honest, but not exactly my type of session beer as more bitterness is in order~ Nevertheless, for what it’s worth, it serves to prove that there’s no need to categorise beers/ales in grea…t details. This is neither one’s Dark nor Pale Mild. This is a Mild in its own right as far as the brewers and drinkers are concerned!

Mild in name only. I can see how this sells so much, it's dull and drinkable. Barely a good session bitter, and a disaster as a mild.

The nose is the main attraction scents of brown sugar and walking past the bakery when treats are being cooked a real biscuity malt and red fruit aroma.

A small but quite substantial creamy head with the odd big bubble.

Sweet barley swirls around the mouth departing with a crisp hoppy bitterness hold onto the better than average mouthfeel supported by good carbonation that helps summon a head with a swish of the glass.

Slightly astringent caramelised malts with some mettalic character and a hint of vegetable. Not the best.

This is not a great mild by any stretch of the imagination. The malt is a bit metallic and the overall flavour profile is a bit industrial.