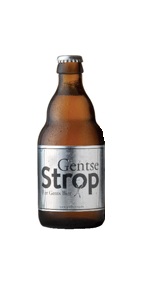 Pours a hazy golden color with a big top of white head that dissolves quickly and leaves some lacings.
Aroma is of apples, citrus peels, light bread, grass and herbs.
The taste starts of with a fruity sweetness before it turns to more spicy and peppery notes. It then finish of with a strong bitterness. Aftertaste is weak, and the flavours are kind of unballanced.
Mouthfeel is soft and smooth with a medium carbonation and a medium body.
It,s a decent enough belgian ale, but not exiting enough to stand out.

From the 1.5 l bottle with a noose (strop), it pours a slightly hazy golden with a vigorous head, replenished by a steady stream of bubbles from the bottom. Pleasant smell of malt and hops. Taste is relatively light, with a light bite of yeast and hops. Enjoyable!

Interesting beer I found in Belgium when travelling, so brought a bottle home.

Pours a huge almost 3 finger head that hits the very top of my Palm tulip, fluffy airy head that fades at a med pace, lots of big bubbles popping, and plenty of soapy spotted lacing, over a semi hazy golden honey colored beer.

Nose has a typical Belgian aroma, plenty of esters and some phenols from the yeast, hint of citrus like orange zest, little touch of a maybe saison or tripel like spices, bits of doughy blond malt, a touch of a yeasty funk like.

Taste brings more of the same, big tripel like flavors but without the alcohol, the esters and phenols play out like it will have 9-10% abv but the alcohol burn never comes, with some citrus zest as well, and faint tripel like spices. Phenols are strong, as well as the esters, with a light doughy blond malt. Hops kick in too somewhere in there, a little grassy and earthy. Bitterness is mild though. Finish brings a bit of booze like tingle somehow, little sticky sweet but dry, more tripel spices, malts, and esters lingering.

Overall not bad, the phenols are too much, and booze that shouldn't be there seems to come through somehow. Compared to most American version of Belgian beers it's not bad, but compared to most of the beers I had in Belgium is so-so.

Sm: A light aroma of barley and malt. That's all my broken nose picks up. All apologies, lads.

T: Nice cream, moderate full barley forming the foundation, and some cream on the finish. Structurally, it's quite simple, featuring just the open and the finish. There's not much body here, but it's decently complex. Pretty well balanced as well. A decent build but perhaps not strictly to style.

Nearly clear yellow brew with a nice head in the wine glass. Light bodied and crisp lighter beer. A nice puff of hops as you open the bottle cap.

A decent splash of the Belgian yeasty flavor. Sort of a Belgian Pilsener with a rather perfumey taste. More on the tart side rather than dry. A little winey with a touch of white grape flavor. More bitterness in the long aftertaste. Reminds me of a less intense flavored and less bitter Orval. But I fail to see why this is a Strong Pale Ale while Orval is a Pale Ale and both are 6.9%.

From the 33 cl double-chinned bottle age dated 10/07/2014. Purchased at Beer and Gin House in Gent. Also had this last night at a pub in the big modern style Gentse glass, and it was a nice quaff.

33 cl bottle , dronk this at de gentse feetsen in a gentse strop glass !

Golden, clear body with big soapy white head - almost like that of a duvel. Actually the aroma reminds me of less impressive Duvel as well, with a yeasty base, cornflakes, sharp grassy hops and some lemon. Bitter base taste that doesn’t develop much except an upcoming dryness in the aftertaste. Some white sugary sweetness lingers but is never found in the front. Not quite a Duvel - maybe too filtered - but tasty nonetheless.

Slightly hazy pale golden color with small white head that maintains a minimal presence thanks to a steady stream of fine carbonation. Leaves a few stray spots of lacing on the glass.

Belgian yeast aroma with coriander and lemon. Spicy flavor seems supported from both the yeast and the hops. Firm hop bitterness leads to a chalky dry finish.

Pours a hazy yellow color with a big white head. In the aroma, yeasty and candy sugar. In the taste, candy sugar, yeast, and a small hop. A small bite and medium bodied mouthfeel, with a lightly dry candy sugar in the aftertaste. A nice small bitterness and hop in a basic blonde.

From the Brewer:
Gentse Strop is a top-fermented blond Belgian Special Ale, re-fermented in the bottle (6.9% alc vol), to give a deliciously hoppy beer with a subtle fruity aroma.
Gentse Strop owes its name to the proud ‘Gentenaars’, the citizens of Ghent, nicknamed the "noose-bearers”.

A: Straw-gold colour, nice thick head, theoretically clear but because of the carbonation you can't look through it.

T: the fruits are there, but there is more bitterness then you would expect, sadly there is a slight metallic taste to it

M: Could use some more creaminess but it's not too thin, carbonation lower then i expected

PS: not sure i like the name, a brewery from Oudenaarde brewing Gentse Strop, i don't know, doesn't seem right.
PS2: Gent strop mean noose from Ghent, the nickname of the people of Ghent is the Noosebearers.