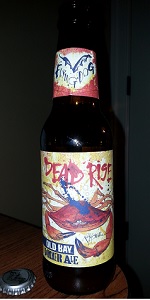 Pours a hazy golden yellow with fluffy white head and nice carbonation. Smells of lemon citrus, cilantro, onion powder, parsley, and grass. Doesn't quite seem like Old Bay but close. I find the aromas to be quite complex. While others may be completely turned off by it, I enjoy it as it reminds me of saltwater, seafood, and summer. Tastes has upfront citrus with spices coming in soon after. Light & refreshing. Spices linger in the aftertaste. Overall, I enjoy this beer. It's not something I could drink year round but i think it's an excellent and interesting seasonal. Very good!