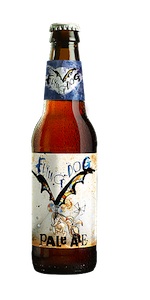 Here's a blast from the past, was legit surprised that they still make this. Pours golden like the rockies, familiar 1/2" white head, decent clarity and retention. Aroma was legit unhoppy. Bummer. You should dry hop a pale ale, preferably with aroma hops, even more preferably, with proprietary hops for aroma. But here? Its like they didn't dry hop at all.

Taste leaves some impression of hops, seems familiar Cascade and maybe something else. Bitterness more than flavor by thy name of the hop game here. Light pale toasted malts and a neutral yeast.

This is one of the most average beers I have ever had.

Had this on tap somewhere back east. Hops just right, not overbearing. Halfway between a lager and an IPA, it hit the mark for me. East Coast hoppiness, not a bad thing

On draft pours brown with an ok head and slightly better than avg lacing.

I'll cut to the chase. The smell is alright but the taste is stale fruit hops. It's not a good beer. Flying dog does some good stuff but this certainly ain't one of them.

S too subtle (Compared with Dales), and it's a pleasant malt base with some musty hoppiness that includes orchard fruit, fall decay, and grape.

I haven’t had a Flying Dog in a while, but I like this brewery. I am the self-declared hop head, but am also known to enjoy a nice pale ale. This variety has a mild 5.5% ABV and promises to be refreshing, of course.

Look-It pours a pleasantly clear amber color with some copper hues that shine through nicely in the light. The carbonation trails are even and the head is two fingers this and slowly diminishes to one finger and then less later on.

Smell-The smell is approachable and non-intimidating. It has a pleasant malt base composed of roasted grains and then a dark hoppiness that lets grape and apricot shine through.

Taste-Grapefruit and apricot is a song sung highly in the hop department. Malts are noticeable first, but aren’t overwhelming. The malts and hops share the stage equally. Floral components rear their head towards the end like clover and maybe some rose and dandelion.

Mouthfeel-It is smooth, medium-bodied, and with a delayed release of mild carbonation that is fizzy and fine-tuned. The tongue is left with a fine coating of resin and grassy hop turpenes that are subtle enough to be enjoyed by novice and hop heads.

Overall-Unfortunately, the several pale ales that I have tried were either over or under hopped. This one is the first variety of its class that I have tried that is so well placed in the pale ale classification scheme. It might be more difficult to hit the bullseye in terms of nailing the pale ale style than most people give credit for, but this brewer definitely knows their pale ales and do so with finesse and sleight of hand.

This tastes pretty good. The taste is not too aggressive and is pretty smooth for a hoppy beer. Someone else said it was "sessionable" and after looking up that word, I agree. Some of the other Flying Dog beers are less sessionable. You could call this subtle.

Clear amber colour, qietha small head that does not hold for too long, minimal head. Smell of hops, reminds me of the Burton-Upon-Trent sulfate water beers. Some caramel, and tropical fruits. Medium to full body, sticky and creamy. Taste of hops, caramel, it keeps reminding me of the Burton beers.

This beer is a nice dark amber color and produces some fine lacing. Smells of resin and grapefruit - taste follows. Crisp the whole way through with a very light aftertaste, which I actually prefer with hoppy beers. The mouthfeel is one of the better I have experienced with pale ale. Nothing spectacular but a solid, sessionable Pale.

L - 12 oz bottle pour to pint glass yields 1 finger of white head on top of crystal clear coppery-golden ale. Looks great.
S - Slight sweetness, dank hops. Assertive for a classic American pale ale. Inviting.
T - Citrusy, resiny hops. Sweet malt and gentle bitterness. More citrus and resin on finish. After 3 or 4 mouthfuls a candy like flavor comes out. Very nice - pushes the limit of the APA style.
F - Medium bodied, medium low to medium carbonation.
O - Really wasn't expecting this as my previous experiences with Flying Dog have mostly been disappointing (with the exception of their high ABV, imperial styles). Would definitely seek this out if looking for a flavorful ale that's not too high in ABV - at 5.5% this would be borderline sessionable. Definitely on the hoppy side of the APA style but hopheads like me should appreciate that.

*** There are (at least) 2 pale ales from Flying Dog from what I've seen - this and the "Doggie Style Pale Ale." Make sure you're looking at the right one.

Thin cap of foam after pouring from a 12oz bottle. Theres a very distinct shape of a skull pattern in the head FWIW. Very deep amber color for a pale ale. Heavy malt nose with a touch of raspberry. The hops fall off a bit in the taste, it seems like they are about to be there and then it just falls short, leaving only lots if malt to contend with. Not bad overall I need to revisit a touch fresher.

L: The color is about a 6-10 on the SRM. It's a little hazy, but the color is nice and light copper. The head poured out at about 2 inches and died down in less than a minute, but had a nice off white color on the beige-ish side with a foamy texture.

S: There is a definite hint of grape. It was the first thing that I smelled, like a grape cut in half, not too strong but it was there. Definitely a little bit of pepper in the scent, but the scent was mild. Definite earthiness on the hop end again, but no obvious malt scents that I could smell.

T: Definite roasted flavor on the malt side but not the foremost thing you notice. Bitterness there but not overpowering but a definite grapefruit flavor. Mild floral tones to the taste and a mild grassy/ earthiness to the hops and again definite citrus leaning to grapefruit.

F: The finish is dry and the beer has a medium to medium high effervescence. The body is medium right about in the center.

O: Overall it is a decent American Pale Ale. I wouldn't call it something that just jumps out of the pack of American Pale Ales for me, but it is definitely drinkable. I would order it, but if I had a choice it would most likely not be the first choice, for me anyway, not bad - no amazing.

A - Very clear orange with a short white head and little lace.

O - Plenty of abrasive flavor in a good way.

This is the first flying dog beer I've tried, the label art tend to drive me away. Poured from 12 oz bottle into a 12 oz glass mug.
A: Clear amber, good head retention.
S: Hops and pale malt
T: Typical american IPA taste. Hops more pronounced than I hoped for from a pale ale which reminded me more of a west coast IPA. Clean and smooth flavor. Citrus.
M: Moderate carbonation, very drinkable, slides down easily
O:A bit too hoppy for what I was expecting from a pale ale, tastes more like an IPA to me. Taste is clean and smooth, no strange flavors or aftertaste. Well made beer but not what I was looking for when I tried it.