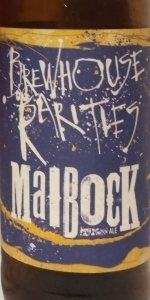 I wish flying dog would never stop making this beer. It's just so good. Definitely in my top 5 of all time. A purely non-pretentious summer beer. No lemon peel and coriander and grapefruit and shandy crap.

If this beer were a human his name would be Richard Mahogany (Rich for short). A perfect mix of reds and browns and coppers and oranges. Smells like baked dark bread with a hint of sulfur. Taste is definitely malt dominant, maybe even a touch sweet for some. But those people's opinions don't matter. So don't worry about that. The only indication of hops is the florals you can sense. The feel is a little thin, which is a bad thing for January but a good thing for July or for sassy people. Not sure I would call it a short coming. It just is what it is. Toss in a shot of bourbon and keep it moving.

Enjoyed from the 12 oz bottle in a snifter. This maibock pours a nice golden orange with a moderate head of white foam that subsides to a thick ring and pooling layer with spotty lacing. Nose of sweet malts, a touch of fruit, and subtle herbal notes. Flavors exceed the nose with sweet caramel notes on the front fading to a light pear and apple note in the middle and finishing with a light herbal hops note. Mouth feel is lightly carbonated and subtly creamy with a light sweetness and herbal crisp hop flavor on the aftertaste. Very solid for being a hybrid of the style since it is not a lager and is an ale which would account for the mouth feel lacking the crisp qualities. Overall highly quaffable and enjoyable.

Darker than gold, borderline amber in color. Aroma is great. Lots of rich caramelized malts and a touch of noble hops. Taste follows the nose, with a little alcohol warmth and a touch of bitterness on the finish. Not a world beater, but it's definitely a nice flavorful malt forward beer that is suitable for times that the palate needs a rest from extremely hoppy beers.

Poured from the bottle into a pokal style pilsner glass.

Off tan colored head and very creamy, almost a vanilla like white and standing a solid two fingers. Body color is a real nice light chestnut, with some lemon hues to it also, quite clear, and with a nice glow. Very impressive body color, but with little carbonation at all.

Aroma hints more to faint sticky yeast, a little bit of muted fruit but not much else. Very little toasty malt presence, crispness, density, or character. Inoffensive but really not much going on for this bouquet unfortunately.

Palate doesn't quite seem to get there. Light bodied for sure, but almost too much. Watery palate that seems to also contain a faint hint of seltzer and mineral carbonation. Tastes also feel not just muted but also even dumbed down, weak caramel, weak toffee, weak crispness almost like flattened uncarbonated soda. The flavors are actually quite pleasant though, but just don't carry forward in the mouth.

Overall needs a little bit of work to make the flavors gel and more pronounced even for this lighter style. The high abv seems like an afterthought at least and hardly noticeable I'll give it that.

Appearance: Pours a dark copper color. The head is two fingers high and off-white in shade. Retention is fairly decent, and the frothy texture leaves behind a nice ring of lacing on the glass. (3.75)

Smell: The aroma is fairly typical for the style (except it being an ale...) I get a ton of bready malt, backed by some earthy noble hops. There are touches of apple pie filling floating around - but they're only a small touch. I don't find the aroma anything particularly special, unfortunately. (3)

Taste: Again with the bread. FD nailed the bready quotient of a maibock quite well. They also nailed the 'apple pie filling' quality on this, a lot better than the nose suggested. Some leafy, earthen hops finish it off, while some slight ale esters add some depth. This beer is very good at 6 oz, but it becomes a little tiring after that point. (3)

Mouthfeel: I get a nice, crisp bite initially, and as it goes down. Unfortunately, being an ale gives it a heft that ruins what could have been an effortless brew. Carbonation is what one would expect from the style, at least. (3)

Overall: bubseymour said it best - Flying Dog is ridiculously hit-and-miss. This isn't a total miss...but it isn't really a hit either. I really wish this was a lager instead of an ale: being the latter takes away a lot of its crispness and drinkability, while only offering a modicum of additional depth. I could take it or leave it, frankly. (3)

Pours a nice clear amber with a thin disc of slightly foamy white head. Light retention and decent soapy lacing. The aroma is lightly bready but the taste is big malts with just enough hops to offset it. This is a big malt bomb and quite good. The body hasa nice feeling on the palate, neither too heavy or watery and just a little bitter bite on the finish.

12oz bottle poured into a pint glass. Pours a light copper with clarity; small off-white head that quickly fades leaving okay retention and little lacing. The aromas are full of sweet caramel malts. Subtle alcohol notes, but it blends in with everything. The flavors are sweet and earthy. More caramel along with a touch of toffee. Subtle bitterness in the finish. Malts do their thing. Also lots of fresh bread and grains. Mouthfeel is nice. It's medium-bodied with moderate carbonation. Alcohol goes unnoticed. Smooth drink.

This is a solid brew. If you're looking for a change of pace, this is worth checking out.

So picked up a single with somewhat meh expectations as Flying Dog beers seem very hit or miss. Poured into Ommegang glass and looks respectable. Medium brown/orange, somewhat translucent and an pedestrian 1 finger head. Nothing special in appearance.

The smell of this beer is awesome and perfect for the style. Smells like a fresh bakery with really dough bready smell combined with some sweet caramel tones. Taste follows the nose nicely. Extremely well balanced malty, breadiness, sweetness and slightly well balance subtle hop crispness in finish. Feel is rich and balanced.

Overall this is truly one of the best Flying Dog beers I've had. Exceptional and true to the German style in every way and dialed in to near perfection. A must try.

Has a subtle, sweet smell — what I imagine a floral/herbal version of SweetTarts candy would smell like. The malts get expressed as well.

Fairly decent overall. I feel like its a Spring equivalent to more traditional Fall styles — like Flying Dog Marzen would be the seasonal opposite.


Brewhouse Rarities: Maibock from Flying Dog Brewery
Beer rating: 84 out of 100 with 35 ratings