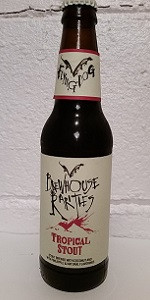 Notes: Rich, roasted malt meets juicy pineapple and toasted coconut, making this beer the perfect replacement for anything that comes with a tiny umbrella.
View: Beers | Place Reviews
Reviews: 18 | Ratings: 80 | Log in to view all ratings and sort

Pours jet black. Smell is hard to pick anything out. Taste mostly pineapple, with a bit of coconut. Not sure I would do again. Possibly if the base were an Imperial Stout, it would work better.

A: Pours an opaque yet still clear very dark brown approaching jet black in color with moderate amounts of active visible carbonation along the edges of the glass and light to moderate cola brown + garnet red highlights. The beer has a two finger tall foamy beige head that reduces to a large patch of mottled thin film covering the entire surface of the beer and a thin ring at the edges of the glass. Light to moderate amounts of lacing are observed.

M: Just shy of medium bodied with moderate amounts of carbonation. Slightly thin with a light amount of dryness in the finish.

O: Definitely an interesting brew - some kind of Black IPA/Stout hybrid with the tropical flavors and thinner body of a black IPA but the roasty flavors of a stout without a lot of hoppiness. Fairly easy to drink but I wish the aroma and flavors were a little more in sync - not nearly the tropical flavors as there is in the aroma.

tastes like cotton candy and stout. cool concept, but this should seriously never be done again. gross and artificial.

**
02/21/16:
ON TAP AT BLEND. Black Pour, small off white head. A little light gets through. Really tasty stout. Pineapple and coconut are light, but both identifiable. Lacks in body a little, but that makes it work better with the tropical flavors. I thought this could be a disaster, but it is very nice.
**
Update: 03/08/16
Bottle poured to goblet. My 2nd of a 6pack.
Noting only a touch of chalk taste late. Still very good.
**

Pours a deep dark brown color with a finger of head.

If I weer blindfolded, I would think that I had a citrus APA in front of me based upon the smell.

The tropical citrus notes are clearly present in the flavor profile and overwhelm any roast that might be lingering in the back.

The positive - truth in advertising; I was promised a tropical stout and that is what I received

The negative - certain flavors don't mesh together in beer; tropical and stout, for instance

Appearance
Near black with 1 finger of tan head. Ruby highlights.

Taste
The pineapple and coconut are well blended with the roasted malts. Roasted barley, smoke, earth, caramel, and bakers chocolate.

Enjoy by 6/17/16. 12oz bottle poured into a tulip. Pours almost black with a fluffy khaki head that falls leaving great retention and sticky lacing. The aromas are subtle with some roasted malts. Some chocolate notes too. Some hop notes. There are hints of pineapple and coconut as well. The flavors seem to follow the nose. Very roasty with some subtle tropical notes. The flavors aren't sweet at all. More pineapple and coconut notes along with some more chocolate. Some hop flavor in the mix. Finishes very clean. Alcohol goes unnoticed. Mouthfeel is medium-bodied with active carbonation. It's very smooth and easy to drink.

This is a nice stout, I like it. I personally wish the tropical notes shined a bit more, but they're still there. It has a nice balance. It's a very clean brew. It's also very refreshing for a stout. This would make for a great "summer stout".

A nice looking beer with a dark brown head that fights to stay. Decent lacing follows. Smells of pineapple, coconut and toasty malt. Taste mimics the noise. I somehow didn't get much coconut in the taste but got a lot of pineapple. Chocolate shows up on the finish. Definately a unique beer. I can't see myself always in the mood for this but wouldn't mind one every now and then. Definately worth trying.

Not a fan of this beer.

S = the best part, it has a nice nose, complex, fresh, with hints of burnt chocolate.

Overall, just not much that impresses me. Probably the 2nd beer from Flying Dog that I haven't liked in their entire history.

Headed into this one a bit shakey. Pour looks great... Pitch black with a small two finger tan head. Smell is pretty awesome, and unique. It's almost coconut but almost pineapple but a little roasted smokiness. The taste though. Once it's in your mouth you're puzzled. Is this a stout? So much fruit... Again pineapple but mainly I Taste coconut. Which is awesome. Mouthfeel is what you would expect from a stout. Very confusing beer, after you swallow it is a stout after all. You get the toasty feeling you'd find in most any stout. Overall I find this beer completely amazing. Perfect feel for what it is. Perfect blend of fruit... And stout... Bitter... Toasty.... Roasted... Something. This rules. Taste it. Be impressed. Be puzzled if you wanna be on the beach or snowed in when your furnace and heat goes out.

Pours a very dark brown color. The head is a finger high and khaki in shade. Retention is quite good, and the creamy texture leaves behind a thick ring of lacing on the glass.

The aroma brings a lot of pineapple, along with an augmenting hoppiness (smells like Galaxy!) at first. Once it opens up even slightly, I start to get notes of chocolate, roast, coffee, and (yes) coconut. This is a very interesting blend, and for the most part, it works. Pineapple is a bit cloying, though.

It doesn't seem as integrated once it hits the palate, though. It starts off with a lot of pineapple flavor, and it seemingly overpowers much of the progression. The finish is pretty nice, however - there's a nice combo of roasted malt, coffee, and coconut. All told, this has good elements, but little in the way of cohesive balance.

Fitting a tropical stout, it's fairly light-feeling, with roasted notes drying the back end of the palate well. Carbonation is also fairly intense, helping to make it seem even lighter. It doesn't go down that easily because it isn't well balanced, though.

Promising, but not fully there yet. Still, it's better than a few other Brewhouse Rarities. The base seems appropriate for a tropical stout (fairly light, yet coffee-forward), but there's too much pineapple roaming around. I probably wouldn't buy again, though I definitely think it deserves a second chance.

Poured into stout glass. It pours a deep mahogany-nearly black- with a two-finger khaki-colored head and lacing. It doesn't smell like the stouts I typically drink: it has a distinct smell of coconut along with some tropical fruit, along with the roasted malt. It reminds me of a drink in a tall glass at a Caribbean resort. I'm not picking up any coffee or chocolate. The taste is also pretty unique: there is pineapple, or papaya and coconut over the malt. There is a slight taste of bitter, burnt coffee at the finish. For a stout, it is light in body and easy to drink at only 6% ABV. I guess that since it's labelled as a "Brewhouse Rarity," it is intended to be a novelty. It's a decent stout and would be great for drinking outdoors in the summer.

Dark look with nice lacing. Strong pineapple with a complex something else going on. Can't quite figure it out. Taste is complex as well (hate to use that term but it is), tropical fruit, some sweetness blending with some chocolate and light roast with a hoppiness to it as well. Very unique and interesting beer. Dialed in well and quite flavorful and enjoyable. Highly recommend.

soupyman10 from District of Columbia

Dark brown with lighter brown highlights, a small half-finger of head that dissipates down to nothing. Nose is fruitiness and pineapple, roasted malt, chocolate, maybe a touch of bubblegum. A touch of coconut mixed in with the fruitiness. Taste is stronger in the roasted malt, more "standard stout." Definitely hints of coconut in the flavor. Body is medium to full, appropriate for the style. Definitely a unique and somewhat odd stout, but for some reason it works.

Poured from the bottle into a Flying Dog goblet glass.

A very dark classic dark walnut brown body, with a bit of clarity to it looking up into the headspace. Head creation is a little tiny at a faint espresso brown, but keeps a good sized collar while settling. Solid looking stout?

Aroma is certainly unique. Creamed coconut slightly mixing in with some simple pineapple juice. Definitely getting a pina colada thing going on, but also no excessively either which is nice. Slight hint of milk chocolate just to round things out a bit makes it interesting.

Palate is a bit more beer like which is nice. Big dry roasty character with a lighter stout American quality. Some good charing going on in the mid palate, which seems even more large and unexpected from the fruity and sweeter nose. Hop forward aftertaste with some slight grainy finish upon the swallow and giving to tropical black IPA character slightly but with a much lighter stout and bigger malt presence. Not much creamy flavors that I thought would be coming from additional coconut, but as a basic stout it's bang on in feel.

It's a neat beer, quite fun but sort of leads to a bit of disappointment with the aroma and the palate sort of disconnected. Still as a solid unique stout it delivers enough.

Not what i was expecting with this one. Looks like a pretty straightforward roasty, creamy stout, but the flavor delivers juicy tropical fruitiness more reminiscent of an IPA. Also keeps it real with some deep roastiness and traditional stout body. Still I'd say this is more like a black IPA, and a good one at that.

Horray I'm the first to review! We got this in today at the liquor store I work at and I knew right away I was buying a 6pk to test the waters, and boy was I pleased. Smell is mainly pineapple, with some roastiness of the stout coming thru, also. Taste follows the nose with a big burst of pineapple/hop taste, then the coconut slowly follows & lingers on the tongue, with again some roastiness & mild chocolate from the stout. The feel for this beer is almost identical to Left Hand Nitro Milk Stout. This beer goes down exactly like the nitro, it's pretty amazing. Hence, it is extremely smooth & creamy. Not a sticky-like mouthfeel that some higher abv stouts can provide, but nonetheless this is a very refreshing stout. It's a wonder why they didn't release this during spring time or warmer weather. If you see this, like stouts, and/or are the slightest bit interested; don't hesitate. Grab it, you know u want to. Enjoy.