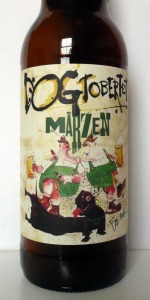 
Burnt apricot with brilliant orange lasers indicating the fiery morning sun on the opposite side of the glass. The toasted cream colored cap is a looker. It's creamy and firm at once with a finely pocked surface and the potential for lace that is already beginning to manifest itself on the upper few inches of glass.

The nose, however, can't come close to those heights. It's low on power for starters and is more grainy than appealingly malty for finishers. Since various varieties of Munich malt make up four of the five malts in use, the aroma is about as earthily Munich-like as it gets.

This is a pretty decent representation of the style even if it isn't much better than average beer in general. Of course, the same could be said for most of the Flying Dog line. The biggest negative is that there isn't a whole lot of depth in the flavor profile. Heavily toasted malt with a lightly fruit accent is all that's on offer. Some amount of spicy hop bitterness appears on the finish (Perle, Hersbrucker), but there isn't a great deal of hop flavor to be had.

There's nothing at all amiss in the body/mouthfeel department. I have no idea if this is a lager or an ale, but given the impressive smoothness, I'd have to say the former. Actually, the mouthfeel is the highlight of this pooch and proves that he passed obedience school with flying (dog) colors.

I'm not an Oktoberfest aficionado by any means, but even I can recognize that there are much better versions of the style than this one. Still though, it's an okay little seasonal that isn't too challenging and could be consumed by the liter mugful while munching on some bratwurst and sauerkraut.

Slightly on the sweeter side, lots of caramel malt, finishes a little drier with a maze note, not much “breadiness” on it, good but doesn’t stand out in the crowd

S: Not much going on here. Some faint grain and caramel but that's about it.

T: Soapy grain. A bit fruity in the finish and aftertaste. I was hoping things might pick up in the flavor department but it borders on offputting.

M: Too fizzy though it has some nice texture to it otherwise.

D: Quite drinkable in that there's nothing really offensive about it and it goes down easy, but I'm reaching for something better after one of these.

Of all the seasonals that I have tasted this season this is far and beyond the best one. Poured into a pint glass it had a great color and a nice head. Excellent beer for watching football and just relaxing with friends. Flying Dog has really outdone itself with this beer. Not too expensive either I paid 7.99 for a six pack

A: Almost clear copper with a 1.5 finger light tan foam head that dissipates into a nice thick lacing and coating.

T: Strong malt and caramel hints with an underlying hops taste. Slight spices, though I can't put my finger on it.

O: Decent beer, but not very complex a tad too thick for this style for my liking.

The beer poured crystal clear pale amber. The head was off-white and lasted to lace the glass.

The aroma was extremely corny with DMS all around. Behind the corn was a maltiness with caramel.

The flavor was more corn and DMS with caramel and a decent bittering.

The finish was dry wand bitter and even a bit harsh. The body was medium.

Appearance: Crystal clear reddish brown. Decent uniform, but not tall head, which moves away from the center of the glass as the beer is consumed.

Smell: Toasty malt is the first thing that you smell. There may be some mild hop presence there, if any. There are caramel notes, and when slightly warmer, a bit of graininess in there too.

Taste: Has that same medium dark caramel and toasted malt flavor that the smell and appearance have been leading up to. There is a bit of hop presence somewhere between the middle and the end of the sip, accentuated by carbonation bubbles. But the end of the sip is clean and smooth, leaving just a hint of tanginess with you.

Mouthfeel: Medium... not too sweet sticky full, and yet not really dry. Maybe a little more towards the dry side.

Drinkability: Great. This beer is a wonderful way to celebrate the arrival of autumn.

A: pours a clear copper into a DFH signature glass with a finger of head that slowly dissipates. There is a solid stream of bubbles from the nucleation point.

S: sweet, yeasty and bread like malt. Some toffee and caramel hints pine sap and needles.

O: great Marzen with some beautiful flavors that mix well.

Pours a clear copper body with a frothy, one finger tan head. Good retention and lots of patchy lacing.
Caramel malt dominates the aroma, with a hint of earthiness and a nice whiff of German hops.
Mouthfeel has ideal carbonation which supports a medium body.
Bavarian style malts have a caramel sweetness that is well balanced by the German hops. This is a smooth drinking festbier, but it seems to thin out toward the finish.
One of the better efforts I've had recently from Flying Dog, and a very respectable festbier.

this is on the label. i think this is a good beer. nice pour with three quarter inch of head. nice medium orange color. aroma of fruits and malts. the taste is much the same and quite pleasant. the only problem i have is that i dont think it matches the Marzen label and style very well. no big deal to me cuz it is good but wonder where they were going.

suckem up and movem out.

On-tap at the Distillery in Savannah, GA

A - Dark orange copper with a minimal off-white head. Left no lacing.
S - Smells of very sweet caramel malts, molasses, and some spice, perhaps ginger or allspice?
T - Malty, sweet bready malt dominates with a spicy, earthy hop finish. I found this to be very sweet, almost cloyingly so.
M - Slick-feeling with a medium body and low carbonation.
D - Not bad, but certainly not the best Oktoberfest I've had. Glad to try it but I won't seek it out again.

The Dogtoberfest poured brilliant orange-amber with a thing white head.

Taste: It started out smooth, with the hops chillin' out in the background but lending a nice sharp tang on the sides of my tongue. It came across as a classic Oktoberfest, and then finished with a bit of a burn that knocked down the drinkability a bit.

I find that Flying Dog's beer always have a bit of their own taste and this is no exception. Good - not my favorite, but good/great as part of the style.

Pours a very autumn like amber-gold. Modest head cream in color. Bread aroma with hops in the background. Balanced between malt and hops. Fairly light in body with moderate carbonation.

This is a sweet, malty beer with a pronounced hop presence for an octoberfest. I think it is a good choice for a sunny autumn day.

What is this beer trying to be?

Poured amber in color, maybe more red. Little to no head to speak of and obviously no lacing.

Smell is sweet and malty. Not much else to speak of.

Very little carbonation, which I like very much, but taste is average. It isn't hoppy or malty, but it isn't bad. It is average.

If I were looking to get drunk, I could drink a lot these. Mouthfeel is very nice. (see low carbonation).

Overall, this is a drinkable beer. It isn't the best Octoberfest I have had but it is far from the worst. I kinda enjoyed it.

S-Malt, caramel and some spices.

T-Very similar to the nose, malt and caramel. Spices are really present here. Finish is bland.

M-Medium bodied but finish is rather flat.

O-Another run of the mill Oktoberfest. Really nothing that stands out here.

Pours a nice enough amber color into my trusty pint glass. Aroma is that of slightly nutty and roasted malts. The taste kinda gets to me. It starts out slightly catty and hoppy, but as it warms, it gets slightly sour. I don't like sour Octoberfests. Mouthfeel and drinkablity are average, except that drinkablity suffers due to the sour taste.