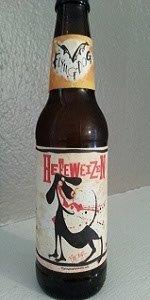 daryk77 from District of Columbia

goldbot from District of Columbia

The In Heat Wheat pours out as a cloudy yellowish gold color with a fluffy white head. The lacing that it leaves is pretty good. The smell of the beer has some soft fresh grains, banana and some clove aromas. The taste has a nice citrusy spice to it upfront which settles into a grainy aftertaste. The mouthfeel is smooth and refreshing. This is a decent Hefeweizen to say the most. It's worth trying.