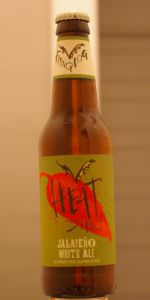 It's a cloudy light amber 12 ounce pour from a bottle into a clear pint glass that reveals these characteristics. First, there's very little head, nor glass lace. Second, the prominent smell is of fresh cut peppers. Nice! The taste is jalapeño dominated, without much malt backing; yet, it's not overly hot. Unfortunately, finding a good hot pepper brew such as Ballast Point's Habenero Sculpin or Free Will's Safeword is now rare. This may not rate with that pair, but it does provide a nice bit of heat in a pleasant way.

Bottle. Straw colour. Slight haze. Rising effervescence.
Aroma of spice and chilli. Smoked paprika present.
Burn arises quickly followed by a mild sweetness. Some fruit and cloves and then the chilli hits again.
Medium body.
Unusual - I am unsure what to make of this one.

Only my second chile beer... so what basis to compare and rate ?
I could review it as a wit, but the Taste gets walloped by the chile. And the Feel takes the same hit.
I suppose it could be an interesting experiment to take a subtle style and spice it without subtlety.
But, the experiment didn't work for me.
After about three sips, I'd had enough and broke out the chips and salsa.

Pours a standard head with very short retention, averga lacing. Clear yellow color. Aroma of green pepper with the smoky notes of jalapaños or padrón peppers, Notes of clove and banana. Medium to light body, carbonation it's OK, palate is creamy and a bit oily. Taste of jalapeños, with smoked notes, as well and cloves and bananas. Not as hot as one can expected, unless you are very sentitive to that, a very good beer.

The eradication of the Bottle Backlog here at Chez Woody continues, now embarking on a Flying Dog horizontal which I had intended to commence with the K-9 Winter Warmer a couple of days ago. A local beer buddy loves these pepper beers and while I am not as enamored of them as him, I do get some enjoyment out of drinking them. I can tell you from exbeerience that this one is mild as compared to the Carolina Reaper offering! Phew.

From the bottle: "Salsa, guacamole, margaritas, cornbread, POPPERS. And now in a beer. These hot little numbers prove that you can do anything when you put your hothead to it."

My utmost thanks to Bro. Jason for reminding me (us) that at its base, this is a white/wit beer/bier and should be agitated in the bottle. I noticed that some lees had formed on the kick, so I got everything stirred up before Pop!ping the cap. Once completed, I gave it a heavy-handed, aggro pour to really move things along. this produced two fingers of foamy, rocky, bone-white head that was quickly fizzing its way down to wisps. Color was an utterly cloudy Golden-Amber (SRM = > 5, < 7). Nose smelled deeply of Jalapeño peppers! Think of it this way: you know better (I hope) than to work with spicy peppers & then rub your eyes because the oils will linger & burn due to their insolubility (or reluctance thereto). Infusing alcohol with these oils simply puts them into suspension & exacerbates their effect. This was not as hot on the nose as pepper spray, but it gives you an idea. Mouthfeel was medium, but the peppery taste and subsequent heat were readily evident on the tongue. As I said, I had tried this before, so I knew what to expect, plus it is not painfully hot. Finish left a slight burning sensation on my tongue & in my throat, but no more than I would get from jalapeños being included in any of the foods listed on the label. I also agree with NeroFiddled that this beer cries out to be consumed with food, cheese at the very least. It might also be nice for cooking, to add some zest to the recipe. I would not want a steady diet of it, but this was pleasant. Now, if I can just get ahold of a bottle of the Carolina Reaper ...

Notes via stream of consciousness: I'll admit some trepidation as I've had pepper beers that have been too hot and spicy, and I could smell the jalapenos as I poured it from half an arms length away. The head is fantastic, it's bright white and it just won't die. The body is a very hazy yellow-gold. It's almost as cloudy as a hefeweizen, but it looks different because only tiny bubbles are seen rising steadily from the bottom. I can smell some malt as well, still at arms length. OK, here I go... oddly fruity at first, and then I remember it's a witbier as well (although seemingly more of a weizen with banana and clove). I get the pepper and then the fruit, the spice, and then the pepper again. There's some heat to it to be sure, but it's not burning like an Ed's Cave Creek. The lacing is limited, and might be due to the acidity but I'm not sure. A second sip simply repeats the first. The orange-flavor is nice, and really works well against the pepper. I guess that makes sense as it's kind of like a peach salsa or something. I don't find any real bitterness, but of course there's none needed, it finishes dry and spicy anyway. I'd call it balanced though; and the fruitiness followed by pepper and spice is pleasant and interesting. It's medium in body, and delicately carbed with what seems like a natural carbonation - any more CO2 would give it a bite that would accentuate the pepper and heat, so it's pretty good where it's at. I guess the only other thing to see about is drinkability... ... ... the heat definitely builds as you progress through the glass but it never gets to the point that you want to stop, and in fact isn't that much hotter than a "hot" salsa, although it does get you a little bit at the back of the throat. I love the lingering pepper flavor though. It's initially wrapped in malt but once that erodes it's pure pepper that just keeps going. If I wanted to I'm pretty certain I could drink two of these in a row, although I doubt I'd do that. It's quite satisfying, and satiating, and not the kind of beer that you just drink your way through - you're kind of forced to pause and enjoy it as you go. In that way I think of it kind of like a dessert beer, as a beer for special occasions; and I'd love to have this with a Thanksgiving day dinner (I think the added spice and additional flavor component would be great against turkey with gravy and cranberries). So, I'm not sure where I stand with this in terms of other pepper beers, but it's got to be pretty high up there - despite my initial anxiety I really like it, and I'll certainly be buying more. For fans of pepper beers I'd say it's an absolute must-try but I think almost everyone should give it a shot just to see.

Taste is much better than the nose would tend to suggest. Lots of freshly cut jalepeno, grain, some green pepper, grass. Heat is balanced, but not overly spicy. Nice lingering heat on the beck end. Its a well done taste for the style.

Overall its a decent beer for the style. The smell is far too one dimensional, but the taste is well done.

Enjoy by 4/19/17. 12oz bottle poured into a tulip. Pours a hazy golden yellow with a small eggshell white head that quickly fades leaving solid retention and okay lacing. The aromas have your typical witbier characteristics. Yeasts are there along with some hints of banana and bubblegum. There's also some pepper skin in the mix. The flavors basically follow the nose. Some sweet fruits along with more banana and bubblegum. More pepper skin along with some jalepeño flavors. Some black pepper in the mix. The heat is definitely there without being overwhelming or dominating. It's the perfect amount of heat for the style. Nicely balanced. Alcohol goes unnoticed. Mouthfeel is very nice. It's on the fuller side of light with moderate to active carbonation. It's very fluffy, creamy and smooth.

This is a really nice brew. They nailed the jalepeño aspects while staying true to the witbier style. The craftsmanship is very impressive. Very enjoyable stuff. Well done.

Part of their "Heat Series", the name says it all and I made sure to swirl the dregs into the glass as a proper witbier pour would demand. Hazed out golden hue, haze is obviously from the dregs mixed in, poured nearly clear to start. Decent lacing. Fresh Jalapeño Peppers in the nose, some hints of spice and yeast but the peppers dominate. Smooth drinking, moderate sized body and semi-dry. Peppery flavor is fresh on the palate with only a slight kiss of heat, this does grow a little bit after several sips but never becomes too much. Breadiness and spice in the middle with more pepper flavor. Very mild on the "wit" side of things but still enough to know what it is and what the brewers were going for. Very enjoyable to sip, beer screams to be paired with just about everything.