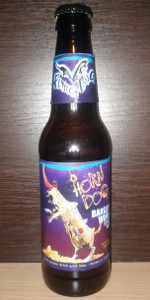 bought a Canis Major variety 4 pack mostly for the constellation name: this is the 1st one I tried:

A: deep red , almost opaque but not cloudy at all, almost ZERO head and no lacing. somewhat dull pour.

T: a tart bite with malty sweetness...but the alcohol burn is well hidden

M very lo carbonation. full body as any barely wine should be

D: probably keep it at one

Kind of a murky brown color, but when held up to the light, shows a deep amber red coloring. Small off white head which dissipates to a covering and a ring. minimal lacing.

Aroma is of sweet malt, candy, and a little bit of alcohol.

Man this is a very sweet beer. The hard candy seems the dominant flavor here. There are some faint suggestions of dried fruit, and a bit of a booze hit, though not as heavy as the 10.2 abv might suggest

Mouth is a tad above medium, finish is sweet.

Overall, and I usually go for English style barleywines, this one is a bit too sweet even for me. Perhaps some age would help, but as it stands, too sweet.

Original Flying Dog Barley Wine, brewed and bottled by Broadway Brewing, circa 1998, and brewed between it's kin, Roundhouse and Horn Dog. Shared on a nice evening in North Dakota. Label said to 'enjoy over the next 5 years' -- 14 years was worth the wait. Poured the color of maple syrup with a thin cover of small bubbles that grew when swirled in an old Flying Dog pint glass. Very smooth and mellow, fruit like flavor, almost like a port, with a mild vanilla aftertaste. Slight alcohol smell and taste, though the 10-11% would sneak up on you. No smell of hops -- the malts and oats came through strongly with slight taste of Kent Goldings and other English hops (?) -- a fantastic example of an aged barley wine. Got better as it warmed up. Should have won a GABF medal back then -- it certainly would now. Have to taste another bottle with a bottle of the older Roundhouse.

Happy birthday Rachmaninoff, you would have enjoyed this.

I'm biased as a MD resident and big supporter of Flying Dog. In addition, I like barleywines. This is a solid, if not really nice take on it. In the light, it almost has the look of sun tea. The taste is pretty standard barleywine fare, but the balance is good and each flavor discernible. The cherries sticking on the palate throughout is a big plus for me.

This is an awesome beer....no question. This beer does bring a punch. You get the figgy pruny taste and very much reminds me of bcbw. A little less of a bite though.

12 oz bottle, poured into a goblet

Appearance: Pours a beautiful, deep, dark, completely opaque, mahogany color with an eighth of a finger of white-colored head that quickly and completely dissolved away into no head what-so-ever.

Taste: Jesus, what a delicious, awesome beer! Massive flavors of dried stone fruit, such as dates, figs, raisins and prunes, followed by tons of candied sugar, toffee, toasted malt and a slight hint of hops.

Mouthfeel: Chewy and smooth as hell, as there is no carbonation what-so-ever. With an ABV of 10.2%, I’m surprised at how little, like none at all, alcohol there is on the palate. The alcohol is really, really, dangerously masked.

Overall: This is a phenomenal barleywine!! Absolutely, fantastically awesome!

A: Brilliant deep mahogany under a 2” off-white foam collar that grips the sides of the glass leaving intricate lace patterns.
S: Sugary malt, wine and port
T: The big alcohol gives the rich malts sherry and port flavors with prunes and rum finishing with bitter hop accent.
F: Thick and chewy, medium low carbonation, just enough to know its there but not too much so as to get in the way.
O: This beer is big in several dimensions but it achieves a balance that prevents it from being cloying or syrupy.

Poured into a pint glass. Beer poured a dark color, seeming to be brown with just a slight hue of ruby. Smell is of sweet malt with hints of plum and cherry. Malty taste with hints of dark fruit and alcohol warmth. Mouthfeel is thick and slightly syrupy. Drinkability is good, I enjoy the sipping on it, however, one seems to be enough for an evening, but perhaps I'll have another.

Horn Dog is an odd beer. It has a banana-like flavor which, as it warms, morphs into bubblegum, very much like I find in Abt 12. The smell is like a BSDA, Belgian yeast and all. Are my senses just being weird today? Probably. Did I enjoy it? To the extent that I can tolerate bubblegum flavors.

L: Pours a nice cloudy amber orange color with a short and thin tan colored head that fades quickly to a ring around the beer.
S: Smells of sweet roasted malts, some caramel, vinous fruits, and a hint of woodiness to it.
T: Tastes of sweet roasted malts, big dark vinous fruit flavor, then some nice wood flavors, and a hint of alcohol at the end.
M: Very thick, sweet, a tad more carbonation would have been excellent.
D: Pretty drinkable, it's a big beer with big flavor so one is probably about as far as I would go.

Pours a red tinged dark brown with a very thin head that disappears very quickly. There's almost no lacing to speak of.

Taste; those dark fruits stand out up front with figs and raisins. There's also sweet molasses and caramel malts followed by a nice hop bitterness and a bit of an alcohol bite. Mouthfeel is full and a bit oily. This is one of the better Flying Dog brews I've had so far.

i drank this one from a rochefort glass.

this beer poured a deep dark red raisinish color and if there was one bubble, there were a million. i poured these as i usually do, pretty hard and get the same usual no head with a tan ring around the edge of the glass and a few patches of tan swimming around the top of the glass. as for trying to see through this one, forget it. not on flying dogs time.

the smell is quite good. very fruity and again raisiny. usually the booze scent is faint at first and develops over time on me with this one, but this one just got the once over in the cooler, so i can actually smell the booze from jump street. a pleasant one on the sniffer.

the taste is fruits, figs, dates, raisins, booze. i love the taste of this beer. i'd go out on a limb and say this beer would taste best near room temperature. very warming on the way down.

a very drinkable beer. so drinkable, i find time to treat myself to about one of these per week and keep a pretty healthy stash around the house. my favorite offering from flying dog so far. they got this one right for me. i actually haven't drank more than one of these at one sitting and i can't imagine that more than two could be anything but detrimental to your ability to walk or function for that matter.

highly recommended in my opinion.

i also plan on laying three or four of these down for future reference. i think it's a keeper.

Picked up a single for $2.29 at Woodman's West here in Madison.

Pours a nearly opaque rusty garnet hue beneath a few fingers of capuccino froth, leaving a sheet of soapy lacing trailing down from the gold rim of my Gulden Draak tulip. Nose is fruity up front, with notes of cherry cider, white grape, and fig over sopping grapefruit hops. Taste is cherry yogurt, brandy soaked raisins, over caramel malt with a light herbal hop finish. Mouthfeel is creamy and luxurious yet not chewy enough to bog you down. The alcohol is there, but there's enough complexity in the nose and palate to balance it out. A top notch barley wine here, caught me a little off guard as I had, until now, yet to be impressed by the Flying Dog I've had outside of Gonzo. One of the best barley wines I've had to date.

Picked up as a single, first barleywine style beer i've ever had, so didn't know exactly what to expect.

A: Very dark brown, cola colored with a red tint when held up to the light. Not much head here, but it does linger around, a nice tan color.

S: This smells interesting i can note the hops towards the end of the smell, um, some caramels, and definitely malt.

T: Delicious, that is all i can say. Caramel malt up front, hops and alcohol on the back, a very good taste, in some ways it reminded me of a very sweet double bock. It is quite sweet and rich though.

M: Sticky, this beer is very sugary and sticks in the mouth and lips

D: I had one, and was satisfied, it is just too rich for me to drink anymore than one. Very good but most definitley enjoyed one at a time.