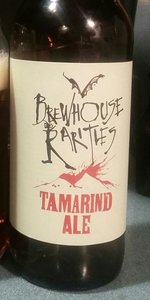 Enjoy by 9/7/17. 12oz bottle poured into a tulip. Pours a transparent copper with great clarity; small off-white head that falls leaving great retention and nice lacing. The aromas are malt forward with some subtle sweet fruit notes. The tamarind aromas are mild, but it gives off a subtle apricot aroma. The flavors seem to follow the nose for the most part. Solid malt backbone. The tamarind is there without being overwhelming. It doesn't seem to steal the show, but remains balanced and noticeable. Brown sugar is noticeable. There's a touch of sweetness, but nothing crazy or cloying at all. Caramel and toffee is there along with some citrus notes. Some raisins in the mix. Alcohol goes unnoticed. Mouthfeel is very nice. It's medium-bodied with active carbonation. It's sharp and fluffy. Pretty smooth and easy to drink.

This is a nice brown ale. It's unique due to the tamarind, but still has some traditional qualities to it. I like it.

Notes on the sniff here of ripe fruit, yes figs picked up, and a hint of the advertised sweet and sour of tamarinds

More of the same in the mouth and over the tongue....malty brown ale notes with a twist...floral, sweet an sour....complex n tasty...worth a try

I keep adding Flying Dog bottles to my inventory! Man, those guys are the dictionary definition of "prolific"! This will be the third or fourth horizontal that I have conducted of their offerings since I embarked on the eradication of the Bottle Backlog here at Chez Woody.

From the bottle: "Tamarind, with its notes of fig, apricot and lemon, is an ingredient our brewmaster has wanted to work with for years. So the stars have never been more aligned than when our cellarman Jake threw it into the ring during our annual Brewhouse Rarities pitch session, the stage for anyone in our tribe to see their idea become a reality."

I Pop!ped the cap while thinking of the movie, "The Tamarind Seed", starring Julie Andrews & Omar Sharif. A gentle pour was followed with an in-glass swirl that raised just over a finger of foamy, rocky, light-tan head with modest retention. Color was a pretty Coppery-Brown (SRM = > 17, < 22) with NE-quality clarity. Nose had a bready quality along with a lemony tartness & I was doubly curious to taste this one. Mouthfeel was medium. The taste was unquestionably a Brown Ale at its base, but the fig flavor was highly pronounced. Man, did that take me back! One of the best liberty ports that I hit was Haifa, Israel and the street vendors with their dried fruits of figs and dates were a great snack as we wandered around. I love the taste and mouthfeel of dried figs and this beer evoked that flavor. It still had the breadiness of a Brown Ale & the lemony citrusiness was also perceptible, but it was the fig flavor that really made it for me. Finish was semi-dry, lightly tart, definitely not sweet, but not terribly dry, either. It was a very pleasant drink and my thanks to Jake for having suggested it.

This is a very nice, unique, blown ale. It comes on not too dark, with nice clean head. The aroma is a malty hoppy smell..

The taste comes at you a bit darker than the garden variety brown. Nice. It stays with you and almost has that big bold English taste. It mostly stays on the safe side, and more authentic. It totally works. Recommended, while you can get it.

Pours a clear garnet color with a tight, off-white head that leaves little to no lacing.

Tastes of the typical brown notes with a hint of tamarind towards the end. Malt notes lead off with brown sugar, toffee, and caramel. Dark fruits add next with notes of fig and cherries. Tamarind adds next rounding out the dark fruits. Finishes with a bit of lingering dark fruits.

Overall, this is a quite good brown. The tamarind adds nicely to the dark fruit profile and doesn't add any weird sour notes.

12oz can bb 9/7/17 poured into a pint glass
A: Brown with a 1/2 finger head
S: Malt/caramel
T: Typical brown ale, more malt/caramel, a hint of tamarind
M: Medium-bodied, a touch sweet
O: I enjoy tamarind but this doesn't show much of it. Otherwise a decent but average brown ale

Quite like this brown ale really has a fruity flavor of apricot and some fig that mixes quite well with the base beer. Haven't really had a Tamarind beer before but this one is pretty tasty. Drank kind of old since best by on label was marked September 2017 so flavors may have faded a bit.

Clear brown with 1 finger head. Smell is kinda weak in faint caramel, and mineral water. Taste is quite respectable with some good brown ale, grain and caramel/toffee notes and nicely balanced hops to maltiness ratio. Even a little spicy notes in there that gives this beer a touch of boozy burn for only a 7% beer. Moutfeel is very rich and creamy. Overall this beer is decent and solid for an English Brown, but the aroma and appearance knock it down a little.

I've always wanted to see tamarind utilized in a beer. On the aroma, I definitely pick up a distinct apricot note alongside touches of fig. The malt canvas offers notes of caramel, milk chocolate, and molasses - said canvas is a good backbone to show off the tamarind addition. Little truly pops on the nose, however. As it hits the tastebuds, tamarind notes show up nicely. The finish is a bit leathery, to my surprise. There are also some molasses, caramel, and brown sugar flavors coming through near the end. Fairly straightforward stuff, all told. It feels like a typical brown ale, with a focus on slickness over creaminess. That's before mentioning how the tamarinds make it slightly sweet. Carbonation is fairly low. It's a solid brown ale with a twist, nothing that will blow your socks off.

Clear dark amber. Subtly tan head
Smells is brown sugar, molasses, dark fruits like date and raisin.
Taste is brown sugar, date, apricot flavors. Not really more than a tinge of citrus from a tamarind type flavor.
Feel is very smooth. A tiny alcohol ester comes through but it cuts the sweet nicely.

Overall a nice English brown. An actual tamarind flavor comes through as lemony, stone fruit, dark fruit, but in this beer you get more of the dark and stone fruits than a citrus element

Never disappointed by Flying Dog. Happy to be review #1