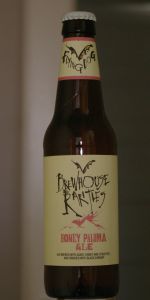 I have to cop to veering off of The CANQuest (tm) on ocCANsion every so often, despite having gotten The Bottle Backlog here at Chez Woody under CANtrol. There are some beers that may never make their way into aluminum cylinders for packaging & I hate to deny myself of their pleasure as a lifelong hedonist first and a CANQuester (tm) seCANd.

From the bottle: "Ale brewed with Honey and Citrus Peel and finished with Black Currant"; "What ups the ante at our annual Brewhouse Rarities retreat, where anyone in our tribe can see their beer concept become a reality? Cocktails. And Todd, a brewer by trade and mixologist by night, made plenty for his pitch for a Honey Paloma Ale."; "Brewed with grapefruit, wildflower honey, agave nectar and lime, he brought the margarita's lesser-known sister into the spotlight in more ways than one."

Oooh, cocktails. Hmm. I am and have been more of a beer & an occasional shot guy, leaving mixology to those who have a fervor for the flavors, but I am also an open-minded reprobate & I will try anything (at least) once. It all begins with the ritual Pop!ping of the cap. In this case, I followed that up with a gentle pour since I believe that I spied a modicum of lees on the bottle's punt. Following my decanting into an awaiting glass, a swirl raised two fingers of dense, rocky, foamy, eggshell-white head with decent retention. Color was a gorgeous Golden-Amber (SRM = > 5, < 7) with NE-quality clarity, calling forth The Gelt Gang of Mammon, Croesus & Midas, all hoping for a sip. Nose had a pronounced honey presence, underlain with dark berries and a slight sharpness, but the emphasis was clearly on honey. Mouthfeel was thick and full, like a dollop of honey had been scooped onto my tongue. The taste was an interesting mélange of honey sweetness tempered by a lime-y citrusiness as well as a dark berry flavor. I can promise you that I would not have been able to parse all of the adjuncts on my own, but honey definitely, absolutely stood out. Finish was actually rather dry, proving that a sweet adjunct need not lead to a sweet finish. My thanks to the yeasties for having admirably done their job!

A - Golden amber pour, substantial head that stuck around.
S - Grapefruit, floral all over.
T - Well controlled grapefruit, but not in the puckering sense. A very interesting mix of flavors that I can pin down. Honey is there, but more in the background and definitely not overly sweet.
M - Solid medium body with a good amount of tartness, medium amount of carbonation.
O - This may be less appealing to the masses, but I really liked it. The grapefruit tamed by the sweetness, and both in check from the alcohol. I'll definitely pick up more if I see it.

Very interesting! Like nothing I have tasted in beer before. I'm not wild about it, but glad I tried it.

As others have noted, grapefruit dominates the flavor, but not in an IPA way. The floral notes in the aroma are also present in the taste. It's kind of nice. And the aroma is pretty awesome, even better than the taste. I find myself going back again and again to smell the brew. It's that interesting.

It's not a beer I would buy again, but it's interesting enough for me to recommend it for others to try.

Enjoy by 10/21/17. 12oz bottle poured into a tulip. Pours a hazy glowing burnt golden with a fluffy off-white head that falls leaving great thick retention and sticky lacing. The aromas are loaded with grapefruit. It's all grapefruit along with some malts and some mild floral notes. The flavors start off with an odd aftertaste, but everything seems to come together the more you get into it. Strong grapefruit notes leads the way in the flavor department as well. I'm talking about some grapefruit juice. Some lemon and lime in the mix. Tons of citrus. Raw honey is there. It's sweet, but not cloying. Solid malt backbone. Alcohol basically goes unnoticed. Mouthfeel is very nice. It's medium-bodied with moderate carbonation. It's very fluffy and slightly creamy. Smooth and easy to drink.

This is an interesting brew. I'm not personally crazy about it, but it's not bad. It's almost one of those "cocktail beers", but it still has some ale characteristics that let you know that you're drinking a beer. It becomes more enjoyable the more I drink it. It's ultimately refreshing and fitting for the warmer weather.

L--Clear, light golden color. Big head that stuck around for a while and left great lacing.

S--Sweet & citrus fruity. Orange and grapefruit are most noticable.

T--Really nice. Lime and grapefruit. I cheated and read the label, so I was looking for honey. It's there, but barely.

O--Excellent. If it wasn't so potent, I could see going through a ton of these out on the deck on a summer evening.

Poured from the bottle into a Flying Dog goblet glass.

Quite a nice looking beer surprisingly. Peach pink like body color, with a sense of almost orange amber to it. Fluffy topped two finger head, that settles to a nice off white creamy one finger puck on top. Real nice and neat looking beer.

Even more interesting aroma. Fruity toned but does get more into juiced grocery isle qualities. Sharp hints of grapefruit and fresh zest on the nose. Sweet berry like qualities in the back as well. Quite a surprising nose. Hints a little spicy and nicely sweet.

Very unexpected and interesting palate. Tasty light grapefruit and an excellent almost hop like bitterness on first sip. Spicy and sweet berry tones round out on the finish making for a fun and playful flavor. Nice simple malt backbone, and the fruits are the star. Nice surprising long controlled bitterness as well which fits in real nicely with the fruit angles. Excellent sharp spice qualities as well, and a real nice touch of controlled sweetness in the agave.

Very good playful fruit beer, and much of the high abv is masked. I'd get more of this.