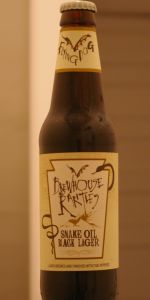 Poured from a 12 OZ bottle into a pint glass. The appearance is pitch black with a large tan head. The aroma is hot peppers and malt. The taste matches the nose and has a spicy hot finish.

Poured from the bottle into a Flying Dog goblet.

Faint forming tan head, barely makes a finger, and makes a bit of a soda popping dissolve with barely a pencil thin collar. Body collar is a dark mahogany brown, with walnut black edges. There is some clarity among the edges of the beer though.

Palate is pretty solidly hot and warm. Definitely a chili beer, with excellent green fresh peppers and touches of actually powdered chile in the mix on first sip. Fairly light bodied but actually manages some schwarz character, neutral yeast mostly hammered down by pepper greatness, and faint touches of coffee and roast too.

Fun beer, but it's not for lightweights. I am pretty toned down now on heat, but this is right in a good zone for tolerability and good punch for balance.

Great spicy beer...if you can't handle heat this is not a beer for you!

The heat comes on the back end with a good black lager taste on the front end.

Craziest beer I've ever tasted! Very complex with a hot bite at the end. Its good, but I would only drink one in a day. Very interesting lager and I would pair it with a fish taco! I bet that'd be really good

Pours cola black with reddish highlights when held up to the light. Head disappears very quickly, even after some agitation. no lacing.

Sniffed to hard to get an aroma and snorted some foam, which you do not want to do with a beer infused with fish peppers. Although it is classed as a schwarzbier, the aroma is more of a stout. but that might just be the peppers stuck up my nose.

The peppers overwhelm the the black lager taste. Now I like the hot stuff, but this is like drinking hot sauce light.

The mouth is medium, finish is hot peppers.

This is really more of a chile beer than a schwarzbier. Maybe dialing back on the peppers would produce a better beer. I can see this being used in the way of a hot wings eating contest, down a six pack in 15 minutes.

This beer pours a rich brown tinged black with a quickly dissipating head. The aroma features a strong note of chili oil, with cinnamon, cumin, dark chocolate, mild coffee, and some earthiness and pine. The flavor starts semi sweet with dark chocolate, and then moves to spicy notes of chili oil, as well as cinnamon, mace, cumin, and a little pepper flesh. The mouthfeel is medium bodied with sparse carbonation. Overall this is a nice little chili beer - the chili flavor is the star, but the base beer has some nice rich attributes to counter. Only real knock against it is the rather weak carbonation.

Pours fairly clear dark brown with a small khaki head. The aroma is mild burnt malts with an overwhelming pepper aroma. The flavor is pretty lame, roasted malts and then too much heat from the "fish peppers". Hard to judge the feel with my mouth fighting the heat. Overall sorry I bought even the single, overjoyed I didn't pop for a sixer.

The aroma hints at the impending peppery doom...somewhat. Really, I've heard a few things about this beer being comparable to Ghostface Killah levels of rampaging butt-fire, yet the nose just has a pleasant, earthen spice quality. Subtly beneath that lie notes of chocolate, brown sugar, and caramel. Honestly, I think the base beer could stand to be a little more prevalent, but the chili aspect is nice. It starts off with notes of chocolate, pumpernickel bread, and brown sugar on the taste buds. The finishing bite of hot peppers is about a 6/10 on my heat scale, and oddly redolent of Herr's Red Hot chips (Maryland and Pennsylvania BAs will know what I'm talking about). Having a starchy, slightly nutty middle also helps create such a sensation. This has a bite to it, but not to the point where it completely drowns out the base. Still, I can feel the heat on the tongue and on the esophagus. It's a great way to trigger acid reflux/indigestion if you're prone to such things (guilty). Ooh, but it bites so good though! Carbonation isn't very strong, and the base beer is slick and a tad slimy. All in all, I'm satisfied with both the heat levels (just right for me) and the base underneath - not blown away, but satisfied.

This WILL catch people expecting a regular ol' black lager offguard, though. It's nowhere near as vicious as Ghost Face Killah or that chili beer with an actual pepper in the bottle, but at least the labels of those made no bones about turning the digestive tract into pure hell (or the current Australian heat wave...) This...without reading the fine print on the bottle, whodathunk this would be a gut-burning hot pepper beer? Caveat emptor, people.

A complete abomination of a beer. So much spicey heat, it cannot be enjoyed as a beverage at all. I took one large initial swig, and about died. Gave another 2-3 sips to give it a fair shake, but it was burning my throat and stomach. My only real drainpour I can remember in 2017 (on New Year's Eve at that). Leave this one alone.

It is the occasion of Merry New Christmas (Eve) Beer Sunday (Week 670) & this continues today's festivities that I anticipate lasting well into the morrow! I really had no idea that I had so many Flying Dog beers in abeyance until I got started, but this is working out nicely.

From the bottle: "Lager brewed and finished with Fish Peppers"; "A forgotten crop steeped in Maryland history. A chef restoring culinary traditions of the Mid-Atlantic. And a brewery that isn't afraid to bring the heat. That was the pitch from our sales team members, Paige and Brian for this Black Lager infused with fish peppers, inspired by the flavors of Snake Oil Hot Sauce. It's good for man and beast."

Yo, I'm a beast, yo! I just needed to Pop! the cap on this one and perform a gentle pour into the awaiting glass before conducting an in-glass swirl was all. It took some effort, but I was able to raise two fingers of fizzy, foamy, light-tan head with limited retention. Color was Very Dark brown to Black/Opaque (SRM = > 34, < 44) with NE-quality clarity & garnet highlights. Nose smelled redolent of peppers! OMFG. It was earthy & spicy & to think of this simply as a Schwartzbier would be a mistake. This was an Herbed/Spiced Beer to be sure. Mouthfeel was kind of thin & watery, but the burning heat on my tongue was immediate, evident & acute. Phew! Okay, the burn from the Mango Habanero Ale earlier was mild, but this was making the tips of my ears tingle & causing sweat to appear on my bald spot. I will be the first to admit that I have a low tolerance for this sort of thing, but this was kind of unexpected. I made a Beef (Crock) Pot Roast with Porter today for tomorrow, although I have been nibbling over the course of the day. At one point, I found myself thinking that it seemed sort of bland, but had I spiced it & then had this to go with it, it may have been too much. Still, I find myself wondering if I could not have used a bottle (or two) of this beer in lieu of the Porter. This is another one of those beers that is going to suffer in its ratings because it is identified by its base beer & not its adjuncts. That is too bad, since I was really digging it, just not so much as a Schwartzbier. The peppery spiciness was the front & center spotlight in this one & it kind of becomes a case of caveat emptor. Finish was dry, spicy & very unusual. YMMV.