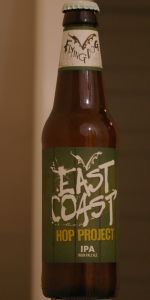 This site has been on Sunday since 2000 (EDT), it is now just past 0300 & I don't feel like waiting for somebody to start NBS (Week 694) when I have my New Flying Dog Beer Sunday (Week 694) ready to roll! It took me most of the week, but I am within three (3) CANs of being caught up on my Tavour CANs. In the process of rolling through them, I noticed that I had a number of Flying Dog bottles that were worthy of a brewery horizontal today. This is the sixth of (potentially) eight (8).

From the bottle: "Revolutionizing the future of beer-centric agriculture, each beer in the East Coast Hop Project highlights a different farm and the regionally-viable hops they produce."; "Starting small and now expanding to a full-service hop harvesting facility outside of Baltimore, Che and Lisa Carton’s hops have been featured in our Secret Stash Harvest Ale for many years in a row. In this beer, the citrus, pine and resin of their Cascade and Chinooks dominate, proving how well popular West Coast varieties grow on the East Coast."

Ho! My hophead mouth is already watering at the prospect of this one & I haven't even Pop!ped the cap. West Coast varieties on the East Coast?!? Who woulda thunk it? Pop! went the cap & slow was the pour so that I could savor every step of this one. Once decanted, an in-glass swirl raised two-plus fingers of dense, foamy, rocky, tawny head with good retention, leaving loads of sticky lacing in its wake. Color was a gorgeous Golden-Amber (SRM = > 5, < ) with NE-quality clarity, summoning forth The Gelt Gang of Croesus, Midas & Mammon from my living room, where they were watching the black & gold-clad Pirates on TV. BUPGOO! Nose was utterly resinous with sticky pine! 8=O Mouthfeel was medium. The taste was definitely pine-forward with some grapefruit citrusiness, but it was neither as pronounced as on the nose nor as intense as I usually get from PNW-grown hops. I applaud their innovation & encourage them to keep up their attempts, but it was not going to replace anything from Yakima any time soon. Sorry. Finish was dry and hoppy & I was a happy hoppy lad, but I have to agree with BB1313 that the Rye Pale Ale was the best of the lot. YMMV.

Enjoy by 9/20/18. 12oz bottle poured into a tulip. Pours golden with great clarity and transparency with bubbles racing upwards; big fluffy white head that falls slowly leaving great retention and sticky lacing. The aromas are on the mild and subtle side. Malts are there. Some crackers and fresh bread. Some floral notes. It doesn't smell bad, but it doesn't really smell like anything. The flavors are very clean, crisp and refreshing. Some more floral notes along with some subtle earthy characteristics. Mild hints of citrus. Moderate clean bitterness. Malts do their thing without dominating. Alcohol goes unnoticed. Mouthfeel is great. It's medium-bodied with moderate to active carbonation. It's fluffy, smooth and easy to drink.

This is a solid IPA. The craftsmanship is on point. It might not be anything super crazy, but it's enjoyable stuff. Subtlety is the key with this one. It's not bad at all and is fun to drink. Once again, it's clean, crisp and refreshing. I personally like the Rye Pale Ale from their East Coast Hop Project more, for what it's worth.

This beer pours a clear gold and an average head. The aroma is slightly sweet, with rich pine, mandarin orange, pink grapefruit, overripe peach, and some vague floral tones. The flavor starts with sweet caramel and cooked peach notes, then pine and solid bitterness take over, with hint of grapefruit flesh and peel, orange flesh and peel, and a bit of woodsy, floral hop quality. The mouthfeel is fairly full with vibrant, foaming carbonation. Overall this is a pretty tasty beer - rather classically west coast, but thoroughly pleasant all the way through.