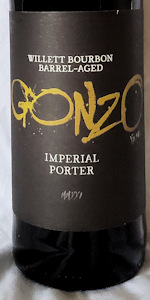 Notes: Aged for months in oak whiskey barrels from A. Smith Bowman, our deep and dark Gonzo gets even more mysterious with notes of vanilla and whiskey warmth.

A: Pours a deep brown, almost black color with 2 fingers of head that fades down to a thin cap

T: Follows the nose. Starts off with a mix of roasted malt, chocolate, bourbon, and vanilla. Picks up plenty of oak, some caramel, coffee, and light leathery tannins. Finishes with lingering bourbon, oak, and leather

O: A very good BA version of Gonzo. The Willett bourbon really adds a nice depth and the oak makes itself very present. Makes for a great sipper at 11.3%. Definitely worth checking out

Aroma is muted Gonzo as far as I remember with light barrel notes. Seems little disappointing.

Taste is big though roasted malts, chocolate coffee, barrel notes, vanilla some bitterness from hops. A big ass beer with noted alcohol warming that blend well with the flavors.

Overall suprised the most is muted on this big beer, seems little suppressed compared to regular Gonzo but that's based on old memories.

Pours black with a 1 inch tan head, which fades to a wisp. Moderate lacing.

The bottle stamp has "VINTAGEAA21" and "MMXXI" on it. It is Willett Bourbon barrel-aged. The barrel-aging is nicely done, even-handed and subtle yet definitely packing a punch as it augments the inherent ABV of the beer.

This started solid. Reminds me heavily of high westified and willetized from lagunitas. Sadly its a little too metallic, acidic and thin to buy again. Id buy in a pinch but its no worls class beer.

Dark brown like oil. Three quarters of an inch of solid, medium-brown foam sit on top. A sheet of micro-bubbles along with oily residue cascades down the side of the glass with every tilt.
Nose is moderate with nice aromas of vanilla, oak barrel, cola-like caramel and biscuit malt that carry through
in the flavor with some roasted malt and a small amount of woody hop flavor. Low to medium bitterness. Finishes with a little warmth.
Medium body with moderate to high carbonation. Smooth and a little creamy.
Get some.

On further review. Following another draught 8oz snifter at the Brass Tap here in Baltimore, I've revised my original ratings in a uniformly upward direction. Still NOT my favorite barrel-aged imperial porter, but definitely better than my original impression.

On tap at Spokeasy Public House

A: Pours basically black with a frothy light brown head that settles to a thin layer and leaves somelightlacing.

T: Bourbon, toffee, and molasses fighting with a piney bitterness and a little char up front, some roasted malt, dark chocolate, fig, a hint of berries, oak, peppery spice, toasted bread, with a noticeable though not entirely unpleasant touch of alcohol.

O: I've been hoping to try this one for a while. It's good fresh, but I would imagine that if it was given more time to mellow out it would be even better.

Really disappointing. Gonzo is fairly hoppy and the hoppiness was the predominant note in this version - more so than booze, barrel, vanilla, chocolate, sweetness, or anything else you'd expect with a barrel-aged stout/porter. Not very good.

Pours a dark chocolate color with minimal head. Aroma is a touch of oak and booze. Flavor is lightly roasted malts with a some warm booziness on the finish. It's a very smooth drink but overall this is just ok. Nothing memorable about this just an ok porter with some booze.

Black pour, brown towards the edge. Nice beige head, 1/2" on it. Aroma was hefty whiskey, wet barrel addition for sure.

Not as much heat on the taste, still substantial, but not overwhelming, there is still some chocolate malt and a tiny bit of smoke to round it out. Carbonation on point. Super fractional amounts of vanilla and anise.

Decent, but I don't think I want an entire bottle of this to myself. Its good, but I dunno about 750ml of good. Better an ounce or two at a time.

Not a common event for me to write a rview for a beer, but since I happened upon a 2011 Vintage I figured it would be interesting to see the results after 4 years.

Oak and bourbon have really had their way with the aroma. Some chocolate in the background, but it is near imperceptible in comparison to the main flavors.

Suprisingly the roast and chocolate are the most gripping portions of the flavor. The bourbon still plays a pert but is not featured in anywhere the same way as the nose would indicate.

Overall, this has far surpassed my expectations for a Flying Dog beer, but can't help but feel the optimal aging is 2 1/2 to 3 years to retain all relevant flavors

Looks dark and rich black.
Smells like chocolate but I dont get a bourbon smell. But I cant taste the bourbon in the back of my mouth with chocolate on the roof of my mouth. Pretty great experience with no flavor being over powering.

Probably one of tge finest examples of easily aquired big us stouts
Nice coffee and big booze on the nise and tongue
I can't believe I used to pick this up from my local Tesco!

Draft across the pond in Amsterdam

Almost black. Red highlight at the bottom point of the glass. Brown head that sticks around.

Chocolate, molasses, roast, warmth and the barrel comes through with wood, vanilla, and a flash of spirit. Medium bodied.

Never seen this at home so thought I'd try it abroad. Pretty nice.

Poured a black color body with a very little head.
aroma has a roasty chocolate notes.
The taste has a roasty, chocolate flavor with a little oak, and a nice whiskey flavor
Mouthfeel is smooth and overall a darn good beer.

Appearance: Pours a nearly pitch black color. The head, unsurprisingly, is over two fingers high and tan in shade. Retention is quite good, but perhaps not amazing. A large amount of lacing is left on the glass. (4)

Smell: Whoa. This is REALLY bringing both the whiskey and the oak barrel. It's also as vanilla-laden as any bourbon barrel aged imperial stout I've encountered. A subtle remnant of this beer's powerful hoppiness still remains, hiding behind lesser notes of chocolate, sherry, and dark fruits. No doubts here, this has the perfect amount of age on it - ergo, it smells as enchantingly decadent as the best in the field. (4.5)

Taste: It's not really surprising given its relative age, but the main flavor is big on sherry-soaked dark fruits. Still, a subtle whiskey flavor is the first note to hit the palate. A mild hoppy kiss enters the midtaste, while it finishes with some chocolaty roast. Lot of stuff going on here. Maybe the dark fruits are too intense, but this is a very good barrel-aged beer otherwise. (3.75)

Mouthfeel: Slightly thin, but with a mouthfeel similar to liquid velvet. The lightness means it's pretty drinkable (despite the lingering sweet aftertaste), but about 10% more body would make it feel positively orgasmic. Still, with the gentlest warming sensation going down the esophagus, it has a wonderful feel regardless. (4)

Overall: There are a few niggles that keep it from properly challenging the barrel-aged elite (BCBS, this year's Parabola) - and one of those might be the fact it has TOO much age on it. Given the relative oxidation this brew shows, I could imagine a 2012 vintage right now would be absolutely phenomenal. Still, it's drinking very well right now. (4)

3.99/5: Does everything a proper barrel-aged beer should accomplish

12 oz. bottle poured into a snifter. Vintage 11AA, whatever that means.

Taste - The oak is just as strong. Seasoned wood flavor. Bourbon dominates the flavor of the beer. Sweet chocolate once the tingle of bourbon dies off. A little bit of a tart twang from the wood. Cola-like flavor. Roasty and sweet finish.

Overall - It's intense on the barrel, which in some ways is good, because bourbon tastes great. But it also makes this a little rough to drink.

Overall, a pleasant experience. This is better than the already great Gonzo IP – barrel aging seems to improve most beers.

A nearing black, deep cola edge, large foam makes lots of noise as it fizzes out in seconds, perhaps a dirty glass, leaves some color behind after a swirl

T just a hint of coffee and sour cherry to go with what I smell, lots of barrel considering it only spent 3 months aging on wood, no complaints

M not as thick as the color would indicate, some carbonation, some tannins, a little heat, sticky on the lips, charred wood and whiskey on the finish

O dark roast works well with the barrel, a little sour dark fruit plays a part, a little booze popping up here and there but it suits the beer

I'm a big fan of HST and Ralph Steadman and I kinda just wanted the label for my collection, the fact that the beers great was just an added bonus

The flavor has roasted malt, light chocolate, coffee, some sweet caramel and a whiskey throughout. There's a oak on the back with whiskey.

Re-review/edit from tap pour may, 2015 (original 4.02):
Beer poured dark amber brown with thin bubbles collecting at the side (edit: pour is more dark brown tending toward black, bubbles are almost soda-like but much more sustained than a soda), with little to no lacing. Smell hits you with whiskey barrels accompanied by cherries and a small hint of dark fruit.

The taste was no surprise given the nose. The woodiness of the aging comes through more in the taste. There is a subdued chocolatey sweetness that yields to an alcohol sting that is likely a combination of the ABV and the whiskey flavor (edit: more coffee and charcoal notes than chocolate). This beer would probably get a half a notch higher with just a little more body (edit: depth of flavor is fine, but watery feel).

Solid offering for the style. I would get this again, but caution to myself as well as others to let it warm to a proper temp - drinking this "cold" will not give you the best impression of this beer.

Extremely dark with a light brown head that settles down rather quickly. American whiskey on the nose but this is subtle compared to the heavy oak notes that come through.

For being a flying dog beer and a style thats normally a but messy, this beer is not as all over the place as you expect and actually kind of restrained in a really nice way. A little smokey and definitely oaky throughout. The beer avoids some of the unpleasant dark fruit notes that in my opinion don't really work with the style. Notes of vanilla and black pepper, very light notes of roast, coffee and bitter black chocolate. Bourbon is restrained really nicely, pulled back to the back end of the tongue as a nice notes that makes some of the other flavors pop.

A nice change of pace that lets the original beer come through enough while accenting it with notes of oak and using a bit of whiskey for balance and flare. Nicely done.

Gonzo - Barrel-Aged from Flying Dog Brewery
Beer rating: 92 out of 100 with 993 ratings