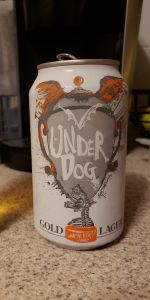 Basically this looks like a macro brew but the head has some legs on it, dissipating very slowly and leaving decent spotty lacing as it went down. Sadly the nose smells like a macro with vegetable husk, grains, corn, cereal and some herbs. Flavor is alright with a mild hop presence, but mostly it’s cereal, some malty sweetness, grains and fresh cut grass.

Super crushable, I love that Flying Dog donates proceeds from this to try to end childhood hunger.

Just under average carbonation as well as the body seeming to be just below average. Still a nice feel to it
Aroma is lemongrass, malt,sweet citrus peel with some grain and cracker
Taste is very similar to aroma,almost a little dry while maintaining a sweet malt citrus peel flavor. Mild hop bite in the finish

A faint maltiness on the nose

Initially a fairly clean lager taste, nothing strong or harsh...

...but the finish is quite tingly, dry, and a little sour largery taste

Overall, a simple and straightforward lager, spoiled by the finish. Brewed for a good cause, childhood hunger. But not a beer I can recommend.

A: The beer is relatively clear yellow in color and has a slight amount of visible carbonation. It poured with a collar of white bubbles around the edge of the glass.
S: Light aromas of corn are present in the nose along with hints of pale malts.
T: The taste follows the smell and mostly has hints of corn, but there are enough pale malts and underlying hops to mask any sweetness.
M: It feels light-bodied and clean on the palate with a moderate amount of carbonation.
O: This beer is easy to drink and isn't that "adjuncty."

12oz can into a Sam Adams perfect pint.

A: Robust pour yields a clear, very light straw with a somewhat dense 1" white head that lingers for a bit. Retention and lacing are ultimately poor.

S: Sweet biscuit maltiness offset with a mellow, grassy hop character. Bright citrus and an almost saline quality round this one out. More going on here than I would have expected, altogether there is some pleasant, subtle complexity.

T: Comes on with with a very mild biscuit/lemongrass that gradually becomes a more well-defined grassy citrus note with a touch of off-sweet malt underneath. The mid palate features lemon rind and a slightly bitter hop character. Finishes rather bland and disappears from the palate quickly.

M: Extremely thin with moderate carb. In my opinion it is not really substantial enough to properly support what this brew is trying to do flavorwise, and ultimately leads to an unsatisfying and watery sip.

O: It's a pretty decent crack at making a 3.9% brew with traces of deep flavor. I just keep finding myself wanting more from this beer, especially in terms of mouthfeel - not sure I'd come back to this one regularly.

This has a lot of flavor for a 3.9% abv light lager. There is a nice crisp biscuit/cracker malt flavor complemented by the perfect amount of hoppiness (grassy/floral/citrus) - not overly hopped like, say, Stone would have done. Very well done.

Starts out light and tasting mostly of yeast. High carbonation and the taste of hard water. Mildly sweet. Floral hop taste but it isn't very bitter.

Overall it is OK. Just not much depth to it.

Welcome back to my New Odds & Sods Beer Sunday (Week 746)! I have been revisiting old friends today in order to stay current with their ever-changing output. Flying Dog & I date back to 2001 when I visited their original facility in the shadow of Coors Field as part of a GABF trip.

It is nice to be returning to The CANQuest (tm) & to celebrate, I am going with a quick Crack! & an inverted C-Line Glug! I was duly rewarded by the quick formation of just under two fingers of fizzy, foamy, soapy, bone-white head that just as quickly retreated into wisps. Color was a beautiful Yellow-Gold (SRM = 4 -5) & here came The Gelt Gang of Midas, Mammon & Croesus, all wanting a taste! They have been on my living room sofa since Friday, watching FIFA Women's World Cup, Pixburgh Pirates black & Gold baseball & are really anxious for tonight's NHL Game 6 since they like the black & Gold of BOS. Me? I'm singing the Blues this year! Nose had a pleasant, adjunct-free quality. Crackery, biscuity, but NO nasty adjuncts like corn to ruin the show. Poor?!? You want Poor in this style, grab a mass-produced Xxxx Lite/Light & then you'll know Poor … in spades! Ugh. Newcomers! The CANQuest (tm) was founded on swill & this did not equal that. Mouthfeel was thin-to-medium, but fuller-bodied than many (most?) in the style. The taste had a bready biscuitiness that was quite pleasant. The hops were quite understated & I am not sure that I would have gotten (or ever did get) Centennial without their hint on their website. They acted more as a shoring up of the malts, which seemed to be the focus for this beer. Finish was … semi-sweet? Semi-dry? Hmm. It was a crisp, refreshing alternative to the mass-produced examples of the style, but I am still not going to fill my beach-bound cooler with it. YMMV. Poor?!? 8=p


Under Dog Gold Lager from Flying Dog Brewery
Beer rating: 72 out of 100 with 16 ratings