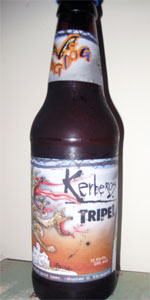 poured from the 12 oz bottle into my new belgium goblet:

A - nice show on the pour. the significant white head settles without lacing though. golden amber and clear

S: belgian yeast - characteristic tripel. not bad for the style

T: smoooth! impressive. ABV is on the DL. liking this more than I expected.

D: I dont much like triples but this must be a good one. would have another if I liked the style. (grins)

After having the Garde Dog a few weeks ago and feeling like it faltered in the Belgian spirit despite being a clean beer, I'm afraid this beer fares a similar fate. The pour brings a strong golden color with initially active carbonation but calms quickly leaving the beer heavy and normal. Fair head formation and retention with no evidence of lacing. Aromas are very rich with pilsner malts, light acidity, light fruitiness, peppery-ness, and berry-berry like twang. Though the aromas are nice beer-wise, it lacks the soul of a true Belgian Tripel. flavors take on the confectionate sweetness of sugars and malt which are nice but are hardly tempered by mild fruity esters of pear, apples, and appricots. The peppery phenols do little to add complexity or variety. The textures are a bit heavy due to high malts, only mild attenuation and dryness, and dull carbonated feel. Finishes sweet, but clean- lingering with cotton-candy sugars and pilsner malts. A nice beer overall, but cannot compete with classic Belgian Tripels.

The back label reads: Vintage09BB

T - Belgian taste and a nod to pilsener as well; a very noticeable alcohol and ester twang, notes of banana and mango, a bitter hop asserts itself at the finish, and ending with a clean sweetness that lingers.

D - I like this a lot; it is not a real Belgian Tripel, but it has a lot of good qualities. I have never seen it anywhere before, go figure that I found it at a Thai-Mex restaurant. Yes, I said Thai-Mex. It exists in at least one place: Nitally's in St. Petersburg. And so, this beer paired well with spicy Thai-Mex food.

This beer pours a cloudy pale orange color. The head is one inch in height, and recedes quickly into a small cap of lacing. The aroma is of barnyard and vomit. The taste is similar. I am a huge fan of funky beers, but this beer is funky in a bad way. The carbonation is too aggressive, and very annoying. I will never drink this beer again.

This Tripel pours out as a muddy looking gold color with a head the rises and falls pretty quickly. The smell of the brew has the elements of a tripel, it's got some Belgian Yeast and some light spices on the nose. The taste of the beer gives off some bready yeast flavors and the subtle tingle of spice on the tongue. The mouthfeel is a slightly thick and wasn't overly carbonated at all. It's a pretty delicate brew. Not the best tripel out there by any meas but it was still drinkable.

Pours a slightly cloudy gold with a surprisingly small white heads that disappears very quickly. The appearance is not what one typically expects of this Belgian style. The aromas promise a lot of sweetness of come: smell is huge on the bubblegum, honey, spices, and sweet fruits like kiwis. Taste is indeed extremely sweet, all of the notes in notes in the aroma are confirmed by the palate, with the addition of a pleasant yeastiness but also lots of alcohol. The medium body could more carbonation but leaves a long and interesting finish. Not a bad tripel but not the best. I'm glad I gave it a whirl and wouldn't discourage anyone who's considering it from trying Kerberos.

This is pretty, clear and golden with a nice white head. I almost always give beers 4 on appearance, but this one gets a 4.5. It's a nice, crisp, bitter, slightly phenolic beer with a great, almost pilsner-like dry, hoppy aftertaste. Not much aroma. Goes down very easy, expecially given the 8.5% ABV.

Purchased from the Beers of Europe, a pretty good beer shop based in the UK, by online order; BB 10/04/2010, served lightly-chilled in Tripel Karmeliet's long-stemmed, tulip-shaped goblet.

A: pours a semi-murky, dark golden hue with restrained and mild carbonation; the off-white foamy head settles fast to a rim.
S: the balance gears towards the sugary maltiness, accompanied by lightly sour canned pineapple slices, ripe tangerines and mashed sweetened soy beans. Slightly too sweet on the balance, is my overall impression.
T: unlike the nose, it doesn't taste simplistic actually - a soothingly carbonated swallow of lightly sweet sugary & starchy malts with a faint touch of caramel leads towards a semi-chewy, fruit-estery mid-taste that hints at (faintly) boiled chestnuts, an herbal touch as of coriander seeds, green-banana skins, dried pale dates, and dried pineapple slices... Not terribly complex but really soothing on the overall taste, while the finish turns mildly dry and powdery on the palate, a reminder of both malts and yeast sediments.
M&D: despite the imbalanced aroma, the flavour fares quite well and shows an evolving flavour structure; the overall texture is also enjoyable thanks to just sufficient microscopic fizz to caress the tongue. Not bad, all in all, but certainly NOT quite Belgian to me.

Got this sweet seven ounce bottle from IDrinkGas in a recent trade. Thanks! Poured into a snifter. The beer is a deep slightly hazy yellow with only the slightest bit of head that vanishes quickly and leaves very thin lacing. The smell reminds me a lot of candied orange, not much else for me in the aroma. It's just kind of boozey orange. The taste is the same boozey orange/apple flavor and caramel malts. Nothing really special, it's almost reminds me of what apple juice would taste like with a shot of vodka in it. Cheap vodka that is. The mouthfeel is nothing really offensive, it's smooth and the carbonation is light. The body is kind of heavy but not bad really. I kind of get a bit of heat from the alcohol. Drinkability, not really a good one to be honest. I'm not going to seek this out again. I can find better tripels for my money.

Malty aroma with a yeasty spiciness. A bit of herbal hops is detectable.

Nicely drinkable, and slightly above average overall. A little too sweet for the style.

Pours a stained maple amber color. Very lacking in head, foam, and very, very light bubbling if any. This tripel needs a little more co2. The aroma is a bready sweet, molasses malt, with hints of roses. The first sip is fruits with rosey finishes and faint herbal bitterness. The taste finish pretty quick though. Sweet muffins with a melange of light fruit syrups. The palate is fruit, a little warm, and complex with the malts. The hops are gently lingering in the back of the palate with each sip. Most tripels don't give off any hop flavors. Good too sip, but I think they still need to study just a little harder on the real Belgian brewing styles.

A- Pours a dull orange. One-half finger head forms and then disappears. No lacing present.

M- Somewhat creamy. Not too much carbonation.

A: Nice amber color. Little to no head, no lacing.

T: Decent initial sweetness, and finishes strongly of hops. Maybe a lil too much hops for me.

M: Not too much chew, but I wasn't expecting a whole lot.

D: Drinkable beer, not the best "Tripel" I've had. There are definitely different Flying Dog beers that I'd prefer.

Overall - Overall it's a decent beer. There are better triples out there though, and I'd much prefer a different Flying Dog beers out there.

12oz bottle, snagged from the parental's fridge in charlotte

taste: sweet and a bit boozy - syrupy tangerine, some light yeast, white pepper and clove. a pretty messy tripel - a bit too sludgy

Hazy orange with almost no head and no retention. Crisp fruit aroma and barley. Apple and booze flavors with a little barley and very light hops. Mouthfeel is soft and tangy with a little sour finish.

This is a good beer but it's kind of boring for a tripel. It's easy drinking and has a good mouthfeel but it seems kind of forced. Not bad if it were a pub offering but as a bottled beer it's nothing I would look out for. I do like the name and the label art though!

This beer poured an orangey golden color with a very minimal head. There was absolutely no lacing and by the time i finished half, there was absolutely no head at all. It looked like soda. The smell was very sweet with a fruity aspect that is familiar, but i cannot quite place. The taste is that same fruity, maybe appleish flavor that i got from the smell of the beer. The alcohol taste emerges, but not in an unpleasant way. The alcohol is well balanced with the fruityness. The alcohol lightens an already very light body. There is a good bit of carbonation which i like. This beer is deceivingly drinkable and i was halfway through before i even realized i started.

I bought this eight pack to try this, hopefully not a let-down (the other beers are pretty good), it's rare I find much new or exciting in my local, so I couldn't pass.

Drinks okay, ABV is fairly well hidden, too much sweetness makes me glad this is only 7 ozs, a big miss from Flying Dog, glad I got the gonzo & other beers I actually like with this...

I'm getting a slight bubblegum, clove sweetness. No hops in profile. Some alcohol coming through.

Served from bottle into a Chimay goblet. Pours a hazy yellow-orange with a minimal white head present. Maintained nice lacing throughout. The aroma was comprised of fruit and malt. The flavors picked up on were fruit, alcohol, and slightly bitter hop notes. It had a medium feel on the palate with medium carbonation. Overall this was a very nice brew. The slightly bitter hop note was a welcomed surprise. If the aroma and flavors of this brew were more indepth and complex this could be an extremely nice beer.