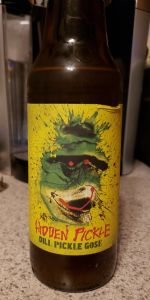 S: Sharp tones of fresh pickle juice are first on the nose, followed by some pale lemon wheat. A decent awareness level, but it is the pickle juice and small salty factor that truly define and keep this true to style. A nice compliment.

O: Crisp, tart and true to style, the addition of the pickles a great addition and compliment per style, again it just works and makes sense. Smooth and very good drinkability per style. Why wouldn't you be interested.

Poured from the bottle into a Flying dog goblet glass.

Real nice golden lemon body color, with a hint of brass darkness to it. Fluffy topped light white head, fine in bubbles, settling to a good but small crowned puck.

Oh this is cool on the nose. Definitely copious amounts of dill, with touches of briney pickle and matching salty character. Faint sense of mild lacto/funky like character in the mix as well, very neat aroma and mouthwatering as well. Pickle fans will be happy.

Palate is less of a surprise. Light but solid malt chewy body. Faint touches of light salt, mixing with a slightly lighter touch of pickle juice, and more actual malt sweetness. Finishes with a good amount of dill and a light wheat density of bread.

A pretty good solid flavored gose, with the pickle angle a good addition, but is not overly strong or blown out.

Looks similar to pickle juice, I guess. The aroma is god awful, like the pickles have gone bad......Taste, on the other hand is not that bad. Great pickle flavor and the tartness is exception. def will get the acid reflux active but I actually enjoyed the taste and surprisingly clean, refreshing finish

L: crystal-clear, yellow-amber liquid; fleeting white foam on pour... after the head/collar all but vanishes, added the bottle dregs, giving the liquid a murky haze, cat's eye glow; did some flecks of ground spice make it through?

S: moderate pickle spicing apparent: dill, mustard, coriander - intensity of the spicing seems to diminish rather quickly, but never completely disappears... from the start, the underlying wheat pokes out a little; as the spicing fades, the overall 'gose' aromas (coriander), which were almost entirely buried, do rise up enough to where it does smell like a gose with a lil something extra; but the aromas are altogether relatively muddled

T: gose-forward flavors upon first sip, spicy coriander and a medium lactic bite in its finish... 'peppery' note partly mustard seed-derived?, (dried) dill in the back a bit... nutty, bread-crusty wheat malt swell in the finish, which lingers in the aftertaste, really relatively malty at its core... moderately salty; begs for a more sharp tang, more pop and zest to its spices

F: subtle shallow plush wave in its body up front, washing out quietly with a tiny tart touch and heat in its finish... wakes up the palate a little, has a nice enough dryness - perhaps I should've sipped this at a colder temp, as the carbonation is weak

O: at least to me, a brilliant flavor concept for a gose, but still expresses core gose flavors at its fore... flavorful, but not very dynamic - playing it safe or just on the decline?... I may be willing to grab a sixer, but they might be a bit aged by now, eh? (1578)

This beer is quite refreshing with the Gose/salt to leave a very clean finish. Dill aroma and flavor is noticed but not overpowering. Very mild tart and not sour at all. Good 1 and done summer beer, but not sure Dill flavored beers are very sessionable.