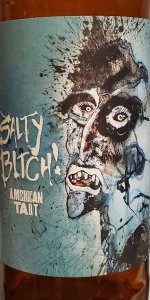 Poured from the bottle into a Flying Dog goblet.

Very enticing aroma. Touches of briney salt, mixing with some interesting herbality that goes to a slight sweet mint and green herbs. Good sense of dense chewy pils like malt and bakery bread qualities too.

Palate hits the mark real nicely. Chewy sensing body, with light simple malt backbone gives way to real brine and light tartness. Hits with salted lemon and even a bit of sweetness kicking in with a touch of herbs. Hits excellent bread baked dough on the aftertaste, an almost bread crust flavor with lemon and herbs. Tangy, salty, slightly puckering, and even a touch of sweetness.

5 oz pour on tap. Aroma and smell are tart wheat beer with some salinity and more coriander than I expected. Mouthfeel is moderately carbonated. Overall it's a solid gose.

12oz bottle into a pint glass at Hucklebucks, Pottsville, PA Thursday night. Best by 12/30/19, a very recent addition to the Flying Dog lineup. FD calls this an "American Tart Ale", but since it's brewed with salt & coriander, I'll put it in as a Gose.

Gave it a sniff, and this might be the worst smelling beer I've ever had. I can think of no other word than body odor, which really made me think If I wanted to go further. But after a few moments, I took a nervous sip....

Fortunately, the aroma doesn't come through on the taste. Initially it's a little salty, but you get used to it, and after a few mouthfuls, it seems there is a decent balance, and in fact, most flavors come through as muted and light, except the coriander, which doesn't come through at all. It's not even excessively tart. malty, slightly salty, and a little grainy.

Mouth is a solid medium, finish malty and a little salty.

Overall, given the aroma, this turned out better than expected, but it still isn't a good beer. Another party at the table declared it worse than blue moon and could not handle more than 2 mouthfuls.


Salty Bitch from Flying Dog Brewery
Beer rating: 3.63 out of 5 with 4 ratings