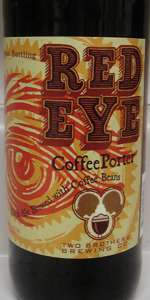 Review from notes -- opened bottle roughly a year ago.

Pours a 1cm head of dark tan foam with average to below average retention, lasting under one minute. The foam fades to a ring around the glass with an island of residuum atop the body of the beer. Lacing is present, though bordering on modest, some good, large streaks and dots, but other areas of the glass have little to nothing. Body is an opaque dark brown to black color, light bringing out ruby highlights around the edges of the beer.

Smells like a coffee doughnut at first, gradually warming up to some blackened malt with associated sweetness and perhaps a touch of cinnamon.

Body is medium to medium-heavy, with low to medium-low levels of carbonation. This results in a smooth and creamy mouthfeel that perhaps sits a bit too much on the palate. Ethanol heat felt just a bit in the nostrils and back of the throat near the end of a sip, but generally well hidden. Closes dry, with a sticky residue on the palate.

22 ounce bomber bottle picked up at Abes Bottle Shop in Bethlehem for around $7. Poured into my shaker glass and appears a dark brown color with about an inch of tightly packed, creamy rich ecru foam. The foam settles to a thin layer after a minute or two leaving a thin lace on the inside of my glass. Smells of fresh roasted coffee beans and sweet molasses. Tastes of a well made iced mocha, bitter cocoa, milk chocolate, molasses, a bit more coffee and a slight hint of alcohol. Bitterness linger through the finish. A notch below full bodied with medium carbonation. Alcohol is barely present making this coffee porter, for me at least, very drinkable. Watch out for this one.

Pours a dark brown with a clumpy creamy tan head.

Smells like a very solid coffee porter. Good robust coffee, relatively sweet malts underdeath. The initial taste is fairly bitter, and the coffee contributes to that bitterness throughout. The alcohol burns a bit in the middle but otherwise is extremely well hidden given it is at 9.2%. The malts linger pleasantly on the finish. The best thing about this beer is that it doesn't have the watery thinness that many porters do.

Overall, it's not a mind blower, but this is a very pleasant. beer. It's too bad it's so strong or it could be a regular.

Coffee.
Cant describe this beer without that word, for sure. Im a big fan of the coffee stouts, and this was better than most of those. Picked up a bomber at Halftime in Poughkeepsie, poured into a stolen pint glass, dark, with a small head that sticks around for a while. Smell of malts but mainly coffee, of all the beers Ive had, this had the most coffee taste. Felt a little sticky or gummy, an odd feeling, in the mouth. On the whole, a fantastic beer and worth trying.

Red Eye pours a very dark mahogany color. It's nearly opaque, but a there's a little light slicing through at the edges revealing nice burgundy highlights. A fluffy tan head stand two fingers tall and is extremely slow to dissipate. Thick, sticky waves of lace clung to the glass.

The nose is weak and only above average. I really want it to be better than it is. Hopefully it will open up as it warms. Edit: A little warming goes a long way. It does feature roasted coffee. Roasted malts are noted and are the primary feature here. Perhaps some light bittersweet chocolate makes its way into the mix. Molasses and brown sugar are secondary and add quality depth. Alcohol is easily noticeable on the tail.

The flavor is a step above the nose and dramatically improves as it warms a little. Roasted malts are the primary flavor up front. They mix with bittersweet chocolate to complete a nice overall malt profile. Roasted coffee emerges and really drives the flavor. That flavor tastes really nice (if you're into coffee). It seems somewhat acidic and bitter. Hardly a negative since it's consistent with the style. Brown sugar and molasses are indeed secondary components. They add quite a bit of character and depth. Tastes like they're might be some light hopping on the tail. Alcohol is noted, but isn't overly noticeable for 9.2%. It's nowhere near warm or hot. Finishes bitter and slightly acidic.

Red Eye's body is too thin and that tarnishes the overall experience a little. It comes across as anemic and is crying out for more body. Edit: It seems to thicken as it warms and a bump in score is warranted. Carbonation is very light. It's smooth, but needs a little more body to accomplish more. Drinkability is good. For a sizeable beer, it doesn't smell, taste, or feel nearly as big as it is. This bomber's disappearing pretty fast if that's any indication. It's still strong enough to command your respect. Good, it is.

Two Brothers did a nice job with Red Eye. It's overall a very enjoyable beer. A couple of tweaks could improve it. The nose needs a little work and a more substantial body would improve the overall experience. But, it's more than a solid beer and will appeal to any coffee fan. That being said, it's not so coffee heavy that others wouldn't enjoy it. Definitely worth picking up irrespective of whether or not you're a coffee fan.

Into a nonic, Red Eye pours an imposing black hue with only hints of ruddy rouge around the edges. The head is a good two fingers and maintains itself sturdily. Lacing is sticky and copious. Wonderful.

Certainly, coffee sits in the pole position with its roasty, bittersweet aroma taking hold upon the first sniff. A caramel/chocolate interplay surfaces upon further inspection with just a touch of earthy hop character buried beneath the layers of goodness.

Rich, chocolate/malt sweetness warmly rises above the coffee and cream body that first stands out. Lush notes of brewers' licorice and cinnamon sing out as the fuller, more pronounced aspect of the brew subside. No real hop aspect to the flavor with just a hint of alcohol (an impressive feat of subterfuge at 9.2%).

Rich silky texture with a full body and relaxed, creamy carbonation to put an emphasis on a rather luxurious beer. Well, it's just lovely and one of the finest entries into the Two Brothers Artisanal cannon. After a few misfires, the Bros. Ebel are back with a real gem. Buy it. Now.

Hmm, a coffee infused baltic porter from Two Brothers? MUST TRY! Shared on the fly with my buddy Davo and pwoods...

Pours a dark brown, like root beer. As it sits it my glass, it's almost black. A nice creamy, mocha color head chills out on top with great little beads of lacing on my over-sized cab glass.

I like this version of a coffee porter because the coffee present is slightly bitter and not sweet. Like the nose, I get the heavily roasted, almost burnt malt presence. There is a moderate amount of caramelized cane sugar sweetness, as well. Vanilla hints blending with a creaminess very nicely.

This is one of my favorite offerings from Two Brothers - great beer!

A: The beer is jet black in color. It poured with a thin tan head that dissipated very quickly, leaving only a thin ring of bubbles around the edge of the glass and some wispy lacing on the surface.
S: There are moderately strong aromas of coffee beans in the nose; these grow a bit stronger as the beer warms up.
T: Similar to the smell, the taste has flavors of coffee beans along with hints of cocoa nibs and chocolate. No bitterness is detectable and there are very slight hints of sweetness.
M: It feels medium-bodied on the palate and has a moderate amount of carbonation. There are some slight hints of warming from the alcohol as the beer warms up.
O: This beer is very easy to drink; no traces of alcohol are noticeable in the taste. It seems to be a bit heavier compared to other porters and closer resembles a lighter-bodied stout.

poured 22oz bottle into snifter. Dark coffee brown with a 1.5 finger tan head. Excellent retention that leaves a fat collar and good amounts of lacing on my glass. Wafts of nice roasted coffee and dark chocolate are the biggest aromas. Hints of caramel and even some vanilla. It is a porter with superb coffee flavor and notes of caramel, vanilla that are blended back to the original coffee porter. Wonderful dark chocolate on the finish. Great carbonation for the style, smooth and creamy mouthfeel that is medium in body. This is very good with a wonderful coffee and chocolate flavor.

My 800th review-Cheers!
I picked this up at Brass Rail Deli. Poured chilled into a Nonic, shared w/ octopus87.

A - Completely black -opaque w/ only a slight garnet color escaping at the base of the glass when held to the light. There is a dense thick 2 finger medium brown band that creates splattered lace on the glass. The bead is very fine

D - A very drinkable ale, nice mild coffee flavor and very tasty w/ balance. I could handle a few of these since the caffeine was not very high and it keeps the porter flavor w/ out the coffee obscuring the malt in the taste.

A - Poured an earthy brown body with burgundy highlights around the bottom and one-finger creamy tan head that settled to a quarter inch of retention and left adequate lacing around the glass.

S - Coffee and sweet cream with a prevalent chocolate presence and milky character. Subtle earthy hops appear in the back, and some mild alcohol crept into the mix, especially as it warmed up a bit.

T - Flavor combines milk chocolate with coffee and a touch of sweet cream, then gradually segues into a more semi-sweet chocolate character, which adds a dose of bitterness to the flavor profile. Finishes with a moderate earthy bitter aspect.

M - Medium bodied with a smooth, creamy yet slightly oily texture and soft carbonation. Finishes with a subtle bitterness on the palate.

D - The 9.2% ABV remained well-concealed except for a touch of heat in the nose as it warmed up. I found this to be a very drinkable porter that was actually a bit more heavy on the chocolate rather than the coffee.