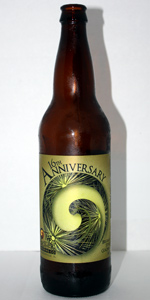 Had this when it came out and it was boozy and gross, so I didn't bother to review. Five months later I came across it again at an out of the way shop, and figured what the hell after seeing some positive reviews. 16% abv... get it? What could possibly go wrong?

Bright saturated orange, crystal clear with trails of rising carbonation. A ring of drippy lacing decorates the glass, and a thin broken skim sits on the surface.

Banana and vanilla creme wafers in the aroma, some fruity yeast.

Taste is a little less pleasant, sharp phenols and a little bit of fusel alcohol. Sweet fruit up front bleeding into boozy territory. Lemon cookies and peach with a shot of gin. Medium bodied and somewhat creamy, though overtly boozy. Admittedly it would be hard to disguise 16%... more time would surely be beneficial in this case.

Two Brothers' 16th Anniversary Ale is a standard Belgian Strong Pale Ale, big in sweetness and ethanol, low in most other characters. Nothing wrong with the beer, but nothing particularly noteworthy, either, except that the 16% ABV is not as obvious as one might think. Generally forgettable.

Pours a smallish, 0.5cm tall head of medium and small-sized bubbles, yielding a mass of sponge-like foam atop the body of the beer. Head retention is poor, with the foam quickly subsiding to a thin ring around the perimeter of the glass and a thin cap atop the body of the beer. Lacing is moderately good, with numerous, complex dots and webs clinging to the sides of the glass. Body is a dark golden color, with light bringing out paler golden yellow hues. Carbonation is visible through the transparent body, moderate in number and activity.

Aroma is of pale candi sugar, syrupy and heavy pilsner malt sweetness, pear juice, slight butter, and warm from ethanol (but not smelling of ethanol).

Beer is heavy bodied, with carbonation of medium-low intensity, resulting in a smooth (2/3) and slightly foamy (1/3) mouthfeel. Ethanol warmth is noticeable on the palate and in the nostrils as the beer warms, which is not surprising for a 16% ABV beer, though the ethanol seems less pronounced than in many wines of similar alcohol content. In total, the way that 16% is minimized in perception is fairly masterly.

Pours a nice golden color with a lot of bubbles. Forms a decent sized off white head, surprising for the strength. The head does linger for a bit.

Smell has malt, citrus, and pepper. I can also detect a hint of alcohol.

Starts out fruity, mainly citrus notes. There is some spice, mainly pepper. There is a bit of alcohol in the back, as well as a hop bite and alcohol warming.

Feel is smooth and full, with a bit of a bite from the carbonation.

An interesting take on the style. I was afraid this would be boozy, but the alcohol is a lot more subtle than expected. It is very drinkable, how they hid this high of an abv is beyond me, but I have never had a beer this strong go down so easy. I always feel an anniversary ale should be something special, and this one certainly is. Glad I gave it a try.

22oz bottle, shared some with my wife (~7oz). Nice golden bodied ale topped with a larger than expected egg-shell colored head that holds good retention. Very delicate, fruity nose with apple juice, grape, chardonnay, honey, yeast. Booze comes through as it warms. Harsh hot alcohol burns a bit upon the first sip, but is more warming after the initial sip; notes of biscuit, delicate fruit, peach, grape, apple, dry chardonnay, faint grassy hop are all present. Medium body, lower carbonation. Overall, it's very white wine-ish, and with the higher ABV it's a given that it's going to be boozy, so I can look past that. I really enjoyed this one, and was glad my wife did too. I was a bit intimidated by the larger bottle and the crazy ABV of 16%.

A beer with this 16%abv this good is rare!
This beer would replace a sparkling wine before drinking wine

A- Dark, clear gold with a two finger white head. Dissipates to a ring of lace.

T- More of the same, but very yeasty and sweet. Cloves, banana, and a bit of cinnamon are there, but fairly underplayed. Back end is a tad alcoholic, estery, and finishes with a punch of chalky yeast.

M- Bit heavy-bodied for a BSPA, but understandable given the immense ABV. Tastes like a normal BSPA…no sign of the gigantic ABV.

O- An extremely drinkable and extremely strong BSPA. Not quite sure how they get a 16% ABV beer to be this drinkable. It’s a big BSPA in all ways. Wonder how this would be aged, although it’s not extremely hot now. Doesn’t quite match up to the big hitters in the category as this is more of a novelty beer, in my opinion.

Poured from a 22 oz bottle into a tulip.

Nice Belgian beer from two brothers. Doesn't drink like its 16% but you notice it's a high abv beer.

22oz. bottle poured into a snifter.

(T)- Fairly similar to the smell. A honey-like centric sweetness combined with a very subtle biscuit-like yeast. This is definitely not shy of the belgian candi sugar. This could give you diabetes it is so sweet.

(O)- Again, extremely sweet and one dimensional for me. It does not have the balance and play on the yeast and sweetness that the style usually has.

Well, shit, looks like the Brothers can finally start learnin' how to drive... Anyway, this stuff pours a clear brushed brass topped by a finger of relatively short-lived off-white foam. The nose comprises apricot skin, light pear, mild Belgian-style yeast, light banana peel, a few bits of clove, and a hint of pineapple. There's a pervasive vein of mild, blunt booze throughout, but it never quite bubbles to the surface to greet the light of day. The taste brings in more of the same, though now the booze has found its way into the sun. Luckily, some yeast, spice, and light fruit spread out on top of it, but the combination ain't exactly what I would call pleasant, much less enjoyable or tasty. The body is a solid medium, with a light moderate carbonation and a drying finish. Overall, this was just too big for its own britches, a Belgian-style golden ale that probably would have been alright without the unnecessarily high infusion of straight booze. It's sad when you come across a nice beer that has been mistreated by its owners and released into the world unable to happily coexist with the populace at large...