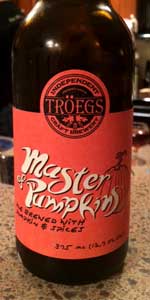 Notes: Brewed with native Pennsylvania neck pumpkins harvested just a few miles from our brewery at Strites’ Orchard, Master of Pumpkins conjures the spirit of autumn by combining roasted pumpkins and traditional pie spices with a French saison yeast. This natural fermentation releases a palate of vanilla, cinnamon, clove, nutmeg, ginger, and honey. In addition to 750mL bottles, Master of Pumpkins is also currently available on draft and for take-out growler fills in the Tasting Room. Taste it you will see. More is all you need!
View: Beers | Place Reviews
Reviews: 78 | Ratings: 414 | Log in to view all ratings and sort
Reviews by Bwise73:

Mine is a 2014 vintage bottle, set aside & then forgotten until now. Forgive me, Master, as I got caught up in The CANQuest (tm) & neglected so many bottles!

From the bottle: "Brewed with native Pennsylvania neck pumpkins harvested just a few miles from our brewery, Master of Pumpkins conjures the spirit of autumn by combining traditional pie spices with French saison yeast to elicit notes of vanilla, cinnamon, clove, nutmeg and honey."; "Master of Pumpkins is highly carbonated. Hold chalice and pour into center of the glass to release the yeast's complex character."

I unwound the wire cage holding the cork in place, while keeping my thumb over said cork. The cork was solidly in the neck & gave me some resistance before relinquishing its grip and sliding out. The Pop! was not as loud as in some beers that I have had, but it was sufficient. The bottle suggests a chalice, but I went with a goblet for my very gentle pour. As such, I had to employ a swirl once in the glass to raise a brief finger of thin, light-tan head that could not wait to return to wisps. Color was a slightly hazy Coppery-Brown (SRM = > 17, < 22), closer to 17, though. Nose was a unique mélange with the saison yeast having had a chance to really impart its light funkiness on the spices, which were also highly evident. I also got a treacle-like bitter sweetness in the mix. Intriguing! Mouthfeel was medium-to-full, not quite creamy, with very limited carbonation. The taste was really different, commingling cinnamon and nutmeg with the funk of saison along with hints of vanilla and that treacle-like flavor that I noted earlier. The latter might have been borne of the honey, but it no longer had its traditional outright sweetness. The overall effect was one of drinking a liqueur or an aperitif. It was sweet-ish, but slightly funky and the lack of carbonation was giving it a solid mouthfeel. Interestingly, the haze seemed to clarify as it warmed, giving it a Deep Amber/Light Copper (SRM = 13) color, much akin to brandy or whiskey. I would be really curious to see what this would be like if it were to be distilled. A second decanting had none of the earlier haze, so it may have been the cold of my reefer that caused it. I prefer my beers closer to room temp, anyway, so it all worked out. I will say this - it is definitely a beer to be savored. As I have grown older, I tend to take my sweet time any more. The rush-rush that was a hallmark of my youth is in its ebb tide. The Navy inculcated the idea that "5" early is on-time, On-time is late and Past due is a world of trouble". I no longer subscribe to that as a hard-and-fast axiom & unless time is of the essence, I prefer a more leisurely pace. The finish was dry, not surprising, given the spices and the yeast. Very enjoyable.

And now ,,, it is time for the lees pour. I also subscribe to "Waste not, want not" as an axiom. I once almost wept as I watched Tom Baker, then of Heavyweight BC, dump lees on the ground! The late Charles Bukowski remarked that "Of all of my problems, constipation ain't one of 'em!" Ha! Sure, the lees can/may/do act as Roto-Rooter in my digestive tract, but when the average American dies with 5' of undigested red meat in there, I like cleanliness. Now, the spices were so intense that I reeled back as though I had been maced! I did a stint as a cop and before we were issued mace & pepper spray, we got a shot to see how it feels. I have never forgotten it. Ugh. The brown liquid in the glass looked like turbid Conestoga River water. One singular draught & it was gone, leaving me gasping for air and anticipating the coming aftermath.

Poured into a tulip and treated as a Belgian ale with pumpkin flavor added, the appearance was a dark muddy orange color with a sustaining finger and a half’s worth of white foamy head. Lacing moves in a sly sticky fashion roaming around the glass nicely. The aroma starts off with sweet pumpkin flesh, Belgian spicy yeast, gentle sweet bready to toffee malts and a warming boozy raisin smell underneath. The flavor balances exceptionally well between the sweet of pumpkin to the Belgian bready/yeastiness. Spices slyly move in. Some ginger, allspice and cinnamon help to provide a nicer cozier balance and everything seems to combine wonderfully in the aftertaste and leaves a quick semi-spicy to sweet malty pumpkin sort of finish. On the palate, this one sat about a medium on the body with a nice sipping to sly sessionable moveable sort of feel. Spices hit in the harshness but the carbonation also helps to balance and not distract. Overall, because of the yeast strain Troeg’s uses for this beer, I believe this is a Belgian ale that has a great amount of pumpkin in it. I would love to have this again.

When this pumpkin beer first came out it was available on tap only at the Troegs Brewing tasting room. At $5.00 per glass, that was a bit much for the amount received (a small brandy snifter size glass). I drank half the glass then left. Not very good. I contacted the manager about it and made some suggestions on how to make this a better brew.

The following year, it was made available in the large 750mL bottles. So I gave it another try. The first half of the bottle was excellent and I thought they greatly improved on the flavor. Tasted just like a freshly baked pumpkin pie. However, I'm guessing sediment stayed in the bottom of the bottle and the second half of the pour had a distinctive taste of cloves over the pumpkin taste. Troegs is using WAY to many cloves in their recipe. If they would simply cut back on them by around half (for example), this would be one of my favorite pumpkin brews.

Sorry, but this is just an above average seasonal beer for an over priced ($13.95) 750mL bottle. As it is now, "Master" of Pumpkins is a rather arrogant name to call this pumpkin beer when there are many others that better.

Pours a brownish copper color. Nose has a little spice and a tart essence as well. The spices are more upfront in the flavor profile than the pumpkin.

Extremely underrated pumpkin beer. This is the only pumpkin beer I like and look forward to it every year. I could drink this year round, not sure why it doesn’t get more hype!

you get the aroma of this beer without being anywhere near the glass. cinnamon, cloves, and pumpkin.

taste follows the nose, though the spice is dominant.

mouth is below medium, finish is a combination of pumpkin spices.

overall, it's a decent enough pumpkin beer, it just seems to lose a little on each category after the look.

Pours a murky dark copper color. The head is a finger high and off-white in shade. Retention is poor, partly thanks to the thin texture and seemingly vibrant carbonation. No lacing really sticks to the glass.

The first whiff of the aroma yields lots of pumpkin spices - namely cinnamon and nutmeg. When allowed to open up, the saison aspects show up with grass, black pepper, and flowers. As someone who generally prefers a defined sweetness in their pumpkin ales (if at all, frankly), I'm a bit disappointed that the malt backbone skews more toward mildly bitter toffee and toasted bread instead of sweeter caramel. When combined with the powerful spicing and the farmhouse yeast, it simply comes across in an excessively spicy manner.

It definitely tastes like the aroma suggested - it's a dry, spicy brew. Opening up with a huge amount of cinnamon and nutmeg, the farmhouse yeast shows itself around the middle. Plenty of black pepper, flowers, and fresh-cut grass gives way to a *slightly* sweet and malt-laden finish. It also finishes with some ginger notes. Plain and simple, the spicing runs roughshod over the flavor profile - the saison yeast exacerbating it even worse. It improves *slightly* as more is consumed, but remains poorly balanced throughout.

I'll give this credit for being as dry and drinkable as it needs to be. It's a bit thin, however. While it goes down quite easily, the heavily spiced nature makes it feel papery and rough. This is very well carbonated as a farmhouse ale demands.

The average score was worrying, but I like Troegs, so I got this anyways. Wasn't the smartest decision I made - it could have been a good farmhouse ale or a good pumpkin ale seperately, but combined, the end result doesn't work. Give this one a miss.

Looks and smells identical to dfh but it has an offensive bitter taste to it. I had high hopes for this one because I love troegs but its botched

Appearance: Dark Amber/Orange closing in on a light brown. Off white colored head that produces little cling of any kind. Retention is below average.
Aroma: Pumpkin spices are the primary aroma with clove hitting extremely hard then some flavors of sugar, both brown and white. Slight pumpkin aroma in the back.
Taste: The clove hits harder in the flavoring but I get more pumpkin as well. The beer is again slightly sweet with sugars. I pick up ginger now. I also get some malts providing an earthy/hay even dirt flavor.
Mouthfeel: Medium bodied. Medium carbonation. I get no alcohol warmth despite the 7.2 abv. A little dry to finish.

I hate to say it but troegs blew it with this one- I normally like them and thought I'd give this a try but In the end down the drain it goes.

Color is rather pretty however; clear Amber mahogany with minimal head lace retention.

Smell and taste are extremely spice heavy- particularly a lot of clove but pretty much everything you'd expect like nutmeg and cinnamon. A little pumpkin but the spices are pretty brutal. There is some saison yeast but it's hidden.

Mouthfeel is fine- medium body, well carbonated. Don't get this beer- I rarely say that. If you love clove cigarettes this may be your jam however.


Master Of Pumpkins from Tröegs Brewing Company
Beer rating: 83 out of 100 with 414 ratings