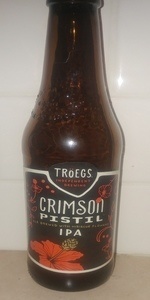 Notes: It’s summertime. Hop bines are growing up to 6 inches a day. Hibiscus is in full bloom. And in Crimson Pistil, the two get in a glorious tangle of berry-like tanginess, sunset technicolor and sticky tropical notes.
View: Beers | Place Reviews
Reviews: 58 | Ratings: 240 | Log in to view all ratings and sort
Reviews by ogman:

A beautiful clear crimson with a light pink head with very good retention and nice lacing. The nose is an intriguing blend of Nugget hops and hibiscus. Pine, grapefruit, rose petals and hibiscus are present. Malt character is minimal. A mild white pepper note is present
The palate opens with a blend of grapefruit and hibiscus with pine and mandarin playing second fiddle. I can neither understate how prominent the hibiscus note is, nor overstate how tastefully this is integrated into the palate. A mild orange blossom honey note is present. Interestingly, the tartness that accompanies an intense hibiscus tea is absent - instead, this is all about the flavor
Drying, bitter finish, with lingering pineapple and hibiscus is present. Medium light on body, softly carbonated, this beer is quite good.

This is one beautiful beer. A dark uniformly hazy Amber hue and pours with a large foamy off white head that retains at about 1 finger and leaves lacing all the way down the glass.

Nose is mild and offers hibiscus and other floral notes, earthy hops and a light sweet malt backbone

Taste is similar to the nose. Lots of herbal and floral flavors and a light sweet backbone. Finish is more of the same with a slight bitterness.

Mouthfeel is wonderful. Medium carbonation, medium weight smooth body. There is a slight watery consistency to the feel but just awesome overall.

Overall this is a good beer but not a really good IPA. It's extremely smooth and drinkable with nice herbal flavors. Unfortunately the flavor profile is just a touch on the dull side. Don't go into this beer expecting your typical IPA and you will probably enjoy it a lot more.

DATE: November 8, 2017... OCCASION: waiting on Region Oil to get our gas back up and running... GLASSWARE: Stoudts pint... pours a cloudy, murky dark amber body... discerning effervescence is difficult... the head is clumpy as wet snow, but clings to the glass with a sponge-like lacing... strong resin empowers the aroma, with an equal amount of flowery hops and cracker malts... honey, dank basement, and damp field make this an IPA that is split between the coasts... first sip is fulfilling, medium-bodied and drinkable... subdued by its finish, not as bright or punchy as other IPAs.... a bit crunchy at the teeth, with a lingering presence of perfume... the twang suggests cranberry or elderberry rings true, with lemon, hay, resin, ginger (?), and sugary tartness late--an odd, mixed bag that does evoke the summer months fondly, but also lags in its consistency... an interesting attempt with ingredients I haven't encountered in a beer... but Troegs has done better...

A - Hazy crimson with a short oink head

T - Hibicus for sure, accents a tasty IPA base. Pepper and moderate bitter finish

The slightly hazy reddish tinged dark amber beer pours out into Duvel glass with a 3/4" white head tinged with pink. The foam recedes slowly but visibly to an irregular thin large island of foam while leaving a ring, some legs, and large patches of lacing on the sides. Sipping creates some arches and scattered patches and legs of lacing, some of which cling to the glass as the others side back to the liquid.

The aromas include some slightly floral grapefruit and berry backed up by some caramel malt that is way in the background.

The flavors are only partly expected from the nose since there is some definite, slightly tart berry and some floral character, but the grapefruit and it's citric bitterness are more in the background while the sweetness and caramel are much more forward than expected

The mouthfeel is medium bodied and very slightly prickly and crisp from the finely bubbled persistent carbonation. The medium length finish begins when the floral and tart berry flavor recede to allow the sweetness and caramel to have center stage to themselves. This is all backed up by the light citric bitterness. Eventually the sweetness fades leaving some mild bitterness to close the show and eventually disappear in a bit of dryness.

Overall I thought this was an interesting beer that I’m expecting to have again so that I can develop a better appreciation of the interplay of the various flavors and aromas. So, at this stage of my experience with the beer I'd certainly not turn down another but I think there’s a good chance that in the future I’ll prefer several other beers to this one when picking something from a tap menu.

From a can at the Burning Can Festival (NC).

Poured from the can into a Spiegelau IPA glass. Freshest by August 19th 2017.

Deep pink grapefruit color, fairly clear with touches of orange hues. Fine carbonation with a very soapy but fine two finger head, settling to a shampoo like bowled collar slightly. Faint cling but not much.

Mellow palate presence. Weak malt depth with a slight bit of fruit but also chalky texture. Minimal sensing bitter citrus pith and rind. Slightly tight playful carbonation on the finish, with more grapefruit like flavors and qualities especially. That neutral malt presence comes through as well, and really doesn't obviously add much more to the taste.

Overall a decent drinkable IPA but nothing really memorable.

It has a heavy haze with some floaters and sediment. It keeps a nice head of foam and leaves some lacing on the glass. The aroma is all hops! It's full of citrus and tropical fruit notes. The flavor is fantastic with a roasted malt base and loads of citrusy grapefruit and tropical fruit, papaya, mango, guava. The hibiscus adds a kind of tart cranberry and lemony citrus. The finish is dry and snappy with a pleasant hop bitterness.

Pours a hazy amber color with a tight, white head that leaves little bits of lacing.

Smells of floral and some citrus notes.

Tastes of the floral notes mostly. Floral hibiscus notes lead off before a bit of citrus hops come through. Malts come through with caramel and grain. Finishes fairly clean.

Mouthfeel is medium-light with a smooth amount of carbonation.

Overall, this is a mediocre IPA and there is nothing to back the floral notes.

A: Light pink, hazy, and a white/pink head.

T: Nice bitterness with a tropical fruity flavor and a floral finish.

From the can, it pours copper/crimson color with 1 finger foamy off white head that faded slowly and left good spotty lacing.

Smells of flowers, lemon zest, citrus and faint caramel. The hops let some malty notes through but the hibiscus brings just as much to the aroma as the citrus hops. Not bad smelling, just not hoppy enough for my liking.

Like the nose the hibiscus is too strong for my taste. More caramel, biscuit and toffee than in the aroma, the citrus hops are fruity but far from dank and lacking the grapefruit normally associated with the blend of hops listed on the can. A good beer overall, but basically average in most way.

Crimson Pistil from Tröegs Brewing Company
Beer rating: 84 out of 100 with 240 ratings