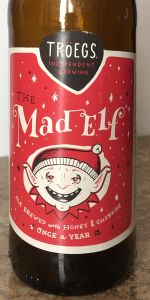 The beer is a deep copper colour in the glass with ruby highlights. The head is off-white and quickly reduces to a thin covering. There's lacing on the glass. Minimal, lazy, small-bubbled carbonation is evident.

The nose is complex. There's cherry (verging on that Dr.Pepper artificial cherry aroma), marzipan, sweet caramel malt, maybe some vanilla and cloves and a bit of cinnamon in there. Overlaying it all is a hint of alcohol. To me, it's not all that enticing and comes across as a little harsh in the cherry stakes.

The taste largely follows the nose but the cherry and sweet caramelly malt combine well together in the mouth. The cherry is quite forward, but not as harsh as it was in the nose. I don't pick up any honey but there are what I perceive as Christmas spices in the middle of the swallow At the end, there's a sweet, prolonged tanginess present that demands a further sip. Put together it all tastes really nice.

The mouthfeel is sharp, and appropriate. There's minimal carbonic prickling after the swallow but a nice alcoholic warmth settles in the stomach. I felt some numbness in my mouth while drinking this, and while that could be totally random, it was definitely there. I'm ignoring that for the sake of scoring.

Overall I would definitely go back for another one of these, notwithstanding the 11% ABV and the somewhat harsh notes in the aroma. I'm drinking this on a cold, windy day at the start of Spring and it suits the weather perfectly. Christmas Ales aren't really a thing in Australia, as Christmas can be scorching down here, and while I don't subscribe to the idea that you can't drink heavy dark beers in summer there's no denying that this would be great in the middle of winter accompanied by a fire and great company.

Rated by Lampro from Virginia

4.37/5  rDev +12.9%
look: 4.5 | smell: 4.25 | taste: 4.5 | feel: 4.25 | overall: 4.25
Handsome looking pour . Clear deep red body under a large tan head that left good lacing. Aroma delivers the promised cherries in a non subtle way, along with a good dose of honey and seasonal spices. Flavor takes off in a couple different directions. The yeasty underpinning, the pronounced fruit footprint from the cherries, the added dimension that the spices, particularly the cinnamon, provide and the soft sweetness from the honey all working together. This sampling is from the 2021 production run with a best by date of 11/2022
May 29, 2022
Rated: 4.23 by TC-Mojo

Beer poured crimson with a nice off white head.

Nose has hints of cherries over a very large malt base.

Taste is a large malt base infused with cherries. Hopping tries to balance things out but does not quite get there. Finishes with a touch of cinnamon and a nice warmth with each sip.

Mouthfeel is medium to large bodied and smooth.

Overall a nice winter warmer that i would have again but cannot see seeking this out every holiday season.

Rated by nelsonracite from New Jersey

Rated by 2market from Pennsylvania

Reviewed by Singlefinpin from North Carolina

4.23/5  rDev +9.3%
look: 4.25 | smell: 4.25 | taste: 4.25 | feel: 4 | overall: 4.25
Drinking this at The Parsons Pub in downtown Murphy NC.
Poured from a bottle into a pint glass.
Looks amber with a nice foamy head that lasted.
Smells malty, cherry, sweet.
Taste follows the nose nicely.
Mouth feel is medium for the style.
Overall a very nice example of the style that I would definitely order again.
Cheers!

4.01/5  rDev +3.6%
look: 4.5 | smell: 3.5 | taste: 4.25 | feel: 4 | overall: 4
Read the description involving cherries, vanilla, cinnamon, etc. and heard that Troegs cut down on their supply this year due to low cherry supply- therefore I expected it to be very sweet and cherry forward. However, it comes off a typical belgian tripel. Very good, would prefer it over anything you could find in the grocery store.
Dec 28, 2021

Reviewed by mccrackrlm from Connecticut

4.31/5  rDev +11.4%
look: 4.5 | smell: 4 | taste: 4.5 | feel: 4.25 | overall: 4.25
Looks really good in a pint glass with it's reddish brown hue. I am not so good with sense of smell, but the taste is very good, I get the flavor of the cherries, could not really get too much honey flavor. The 11% does hit me, but I do prefer a high ABV and I definitely appreciate this Belgian style holiday ale! I always seem happy with products from Troeg's! The one time I was actually at Hershey park, near the Troeg's brewery, but I was not able to visit the brewery. At least their fine products are available near me!
Dec 27, 2021
Rated: 3.85 by Hefsbeercaps from Ohio

Reviewed by Spade from Pennsylvania

Of note, a can that was a year old had a bit more sweetness and less alcohol bite, and was generally smoother. Wonderful just the same.

Reviewed by SpicyJoe from Pennsylvania

Reviewed by guckymeister from Ohio

We crack open our first bottle and boy was it pure magic. Both of us agreed right then and there that this was one of the best beers either of us had tasted. Perhaps the stress of the exams with being on an empty stomach stirred up the right conditions to love this beer on that night, but my feelings towards it haven't changed.

Awesome beer, expect something very sweet and QUITE boozy