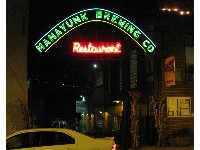 3.91/5  rDev +5.4%
vibe: 4 | quality: 4 | service: 4 | selection: 3.75 | food: 3.75
Nice place, but hidden in the back with an outdoor patio area. Quiet for lunchtime, bunch of TVs by the bar. Selection was pretty good, about 10 beers on top when we were there. Beers were good but not great, typically 3.5/5 to 4/5 at best. Really enjoyed the Belly Flop, though. Food was pretty typical Americana, nothing to rave about but quite satisfied. Overall worth a visit, the location is especially nice on warmer days.
Apr 26, 2017
Rated: 3.93 by InspectorBob from New Jersey

Reviewed by TTripp725 from Pennsylvania

4.58/5  rDev +23.5%
vibe: 4.25 | quality: 4.75 | service: 4.5 | selection: 4.5 | food: 4.75
What a place. The atmosphere was excellent, the food was phenomenal and the beers were outstanding. Being a local PA beer (45mins) near us, we just started seeing their beers being sold around us even though they have been in business for 20 years. My Girlfriend and I have yet to have a beer that we didn't like. Every beer is crisp, full of flavor and shows the craftsmanship and desire to produce better an even better beer. This place has been added to the top of our list to visit when ever we are near Philly!!!
Feb 04, 2017

Rated by bobpgh from Pennsylvania

Reviewed by ricebill57 from Pennsylvania

I was visiting my family from DC for the weekend and we decided to stop in to this location for some drinks with a few friends.

After I jumped on the scale, one Brew Pub bouncer immediately rushed me and began shouting in my face "CAN YOU READ?!" while his associate began placing me in a headlock. As I hope this review at 3:32 a.m. attests (and further earlier video evidence does as well), I was completely sober at the time and utterly confused as to what was happening and immediately placed both my arms up in the air in a non-aggressive, complacent manner (as multiple witnesses can attest). I have no criminal history whatsoever and have never ever in my life been kicked out of a bar or any other similar establishment. However in this case, after I hopped on the scale, just like a few individuals beforehand had, I was immediately screamed at and placed in a headlock. I calmly stated "if you want me to leave, I will leave...I am complying."

My brother and friends also chimed in stating that I was completely complying and that we would all leave if they wanted us to. The bouncer ignored us and as I was walking with the bouncer out of the bar, 100 percent complying, while being placed in a sleeper-hold head-lock (with unnecessary pressure on my jugular veins and throat) another bouncer apparently rushed my backside and was about to strike the back of my head with his fists. My brother stepped in and struck the bouncer, pushing him away from striking the back of my head. Immediately my brother asked why we were being assaulted and stated that we were complying and that we would all happily leave (as we were all ready to leave anyway once our sister exited the restroom).

I then continued to exit the establishment while one of the bouncers held me in a sleeper-hold and placed unnecessary excessive pressure on my neck and throat. On the way out he knocked my jacket off of my shoulder onto the ground (again while I was giving zero resistance). I calmly stated "can I get my jacket, which has my phone charger in it before I leave?" Again, the ENTIRE time I had both my arms high up in the air and provided zero resistance to the bouncer (as multiple witnesses can attest). On the way outside, the bouncer continuously and unnecessarily insulted me while I continued to calmly explain to him that I was happily leaving the bar but I would like to grab my jacket and phone charger. Once outside the bar multiple bouncers began overly aggressively shouting at me about noncompliance and "trespassing." I then calmly explained that I've been entirely compliant the entire time and I just needed to get my jacket and phone charger. One of my friends who was present stated that he could get the jacket and phone charger for me. I said "thank you." Then the bouncer who was shouting in my face for no intelligible reason, said "HE can get it....you can't go nowhere!" After that another random bouncer began shouting at me asking if I knew "how to read" and yelling other random things about "trespassing." Again, the entire time, with my hands up in the air in a nonaggressive manner, I stated "I just need to get my jacket and phone charger."

Once my friend came back outside with my items, the bouncers continued to verbally accosted us, yelling that we were "losers" or other similar odd epithets.

All of this seems an unnecessary and over zealous reaction for a sober 32 year-old young professional hopping on a scale at 1:45-50 a.m. after multiple other individuals did the same thing. If I had violated some bar rule, I would have happily left the establishment with zero resistance if someone had calmly told me I had broken some rule and needed to leave. Instead I was immediately physically assaulted and yelled at.

In conclusion, the bouncers at this establishment are completely unprofessional and ridiculously aggressive. It seems like they simply are looking to create physical fights with individuals and try to find the smallest justification for putting their hands on an individual in an aggressive manner. as a means to inject some sort of meaning into their lives. They seem completely ill-trained, ill-informed, and ignorant of the law and best-business-practices for their profession.

I would not recommend anyone frequent this clown-show of an establishment if they are looking for a chill, non-confrontational, good time.

I am currently examining legal avenues for remediation. I hope management takes notice.

Reviewed by Bruce5 from Pennsylvania

3.65/5  rDev -1.6%
vibe: 4.5 | quality: 3.5 | service: 4 | selection: 3 | food: 4
Industrial warehouse look with a nice big bar and lots of seating. Had 9 beers on tap which should meet the needs of most beer lovers except I love hops and on this visit the session IPA st 42 IBUs was their hoppiest choice which is almost impossible to believe.

Lots of food choices from sushi to pizza. I will definitely try this place again however will check the tap list first.

Reviewed by jimboothdesigns from Pennsylvania

4/5  rDev +7.8%
vibe: 4 | quality: 4 | service: 4 | selection: 4
Stopped in on the way to Mitchell & Ness for a lecture the other night. Enjoyed the atmosphere and the industrial look (not too cold). Impressed with the sushi bar inside. Very good beer and I will definitely return. Picked up a few 4 packs which I am eagerly waiting to try.
Nov 05, 2015
Rated: 3.81 by hockeypuck from Maine

A large, cavernous space with a long bar and a huge dining area, already humming with people at 4pm. Alas, the crowd was boring and the space feels corporate.

Nine taps at the bar, including the tasty Rye of the Tiger, St Alpha Belgian IPA and Monk from the Yunk Tripel. At five dollars per 12 or 16-oz glass, the prices are fine. The beers... not so much, correct but forgettable.

The food menu is as massive as the space and it's got everything. You want sushi? We got sushi. Pizza? Sure why not. And burgers, and entrees, and a kid menu and you name it. We tried the mushroom pizza and loved it, but the pricey deviled eggs were bland.

Service was mediocre, which is a shame because I spotted no less than twenty employees roaming the floor. I am in no rush to revisit Manayunk.

4/5  rDev +7.8%
Nine different beers on tap. Bartender was friendly. The prices here for samples and single glasses are great. There is also a decent selection of liquor for the non beer drinkers. There is a large amount of seating and a rear patio that looks very nice for a summer day (I was there in November). Would like to return in the summer to try the food and see the fun on the patio.
Nov 27, 2014
Rated: 3.25 by baybum from Pennsylvania