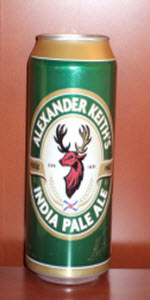 Notes: The pride of Nova Scotia.
View: Beers
Reviews: 296 | Ratings: 686 | Log in to view all ratings and sort
Reviews by guywhodrinksbeer:

Alexander Keith’s is a decent mass-produced lager, especially when it’s served really cold on a very hot day…basically, what I would call a good lawn-mowing beer. Like Molson Canadian, it's low in alcohol (5% ABV compared to 6% or more of a true IPA), pale-yellow, sweet, and very highly carbonated.

But make no mistake, this is by no means an IPA. It doesn’t even remotely taste like an IPA . I'm not ever sure that it's an ale. My guess is that it's a lager.

It’s true that it has been called Alexander Keith’s India Pale Ale since 1820 or something like that. However, there is no reason to continue to call it this at a time when so many folks can recognize the distinct taste of an IPA (that is, beer with a hop count somewhere between 60 and 80 which is what an IPA is). I would be surprised if this beer was above 20 as it just doesn't taste anything like an IPA at all.

I’m not sure why the original branding was “India Pale Ale”. Maybe, the recipe was different at one time or maybe the definition of IPA has just changed; whatever the reason, it doesn’t matter.

In my opinion, these guys need to rebrand this stuff and move away from calling it an IPA; which it is most certainly not.

It tastes warm even when it's cold. Super salty and you're pretty guaranteed a hang over after drinking half of one. Harsh and barely tolerable when offered to you when free. Gives Nova Scotia beers a bad reputation.

What is this, exactly? It's near ubiquitous in Canada, and some people think misguidedly that because it's from the Maritimes and all the good ole boys back home drink it, that it must be good.

Piss poor. I'd rather drink a malt liquor or even a non-alcoholic beer. I put this where it belongs, with all the other big dominant mediocre beers on the Canadian market (ie all the Coors, Molsons, and Labatts.) It's a macro style lager taste, and I honestly wouldn't know this was an IPA if you put it beside any of the anemic tasteless swill that comes from the Big Brewers.

Tried this twice on a recent trip to Canada. It seemed to be everywhere up there. I found this to be one of the worst IPA's I've ever had.

The color and appearance were decent, however the beer had no aroma, nothing from the hops. It's tastes like a blonde ale, or possibly even a macro lager with the tiniest pinch of hops in it. Salty. Watery, yet still somehow thick with a terrible mouthfeel. Flat. Tasteless. Actually, it tastes like they made this using a blonde ale and a diaper. It's bad, and I'm not sure I'd drink it again if it was free.

The fact they call this and "India Pale Ale" and are able to print it as such on the label is an absolute disgrace.

The aroma is.....mineral water? Soggy bread? Maybe some corn or grains in the background. Very faint but also gross.

The flavor is repulsive. Like a skunky AAL. Extremely metallic with some corn and grains. No hop presence whatsoever. This kind of tastes like a mediocre IPA that's been packaged in a green bottle and left out in the sun for 9 months. No other way to describe it.

The feel is literally water. Very little carbonation. No crispness or dryness. It's just water.

Overall, this is unquestionably one of the worst beers I've ever had. I didn't expect anything good but holy crap did I not expect something this awful either. There's zero hop presence, minimal malt presence, no bitterness and very little sweetness. Is this even beer?

S - shiny colour in an IKEA glass. 3 mark is for this,
H - hopes i had for this beer
I - IPA ? really?
T - time i have wasted to get carry a six of these home (and to pour the rest 5 out).
Almost no difference away the European low-quality lager. Have just registered to tell you this.

There is a sign by the road in Ingonish, Nova Scotia, that says, "If its nae Scottish, it's crrrrap." This stuff is nae Scottish. I'm pretty sure it's nae beer, either. I laughed out loud when I read a reviewer's note below that he assumed they'd hooked the wrong keg up to the tap, which is exactly what I asked the waitress. She apologized, said it might have happened, and brought me a bottle of it instead. One sip and I realized the error had happened at the brewery, when they created this swill, rather than at the bar. New rule: always, always, always consult Beer Advocate before trying something new. Sad, but better safe than sorry.

Would have given ZERO if possible.
AHA! You just got fooled by AB-Inbev!
This is not an IPA by far. Very very far.
This is a regular lager sold as IPA because IPA is “fancy” now.
And by the way, it’s not even a good lager, it’s a very crappy one.
Don’t waste your time with this crap.
In fact, they should be sued for misleading customers.

Undated bottle into pint glass. Pours a clear gold-straw color with a thin off-white head that dissipates quickly. Initial impression is WFT??? Tastes like a PBR Light, with maybe a little more corn. Definitely not an IPA. Not even close.

This is not good. Stay away. Stay far, far away.

I hate to sound crass, but I couldn't have been more disappointed. This is glorified piss beer. Pours extremely pale with a weak head. There is a very, very faint hop aroma buried in the background. Almost no real flavor except from a mild hoppiness.

Not worth anyone's time or calories.

A- super clear golden color. Light head, disappeared in a matter of seconds leaving a near perfect ring.

M- good carbonation, a bit too watery to complete a full mouthfeel.

D- high for most macro drinkers, but that chemical taste makes me sick.

Not an IPA. At first I thought the waitress brought over the wrong beer. Eerily similar to a Bud heavy. I enjoyed it at the time but it may have been because I was parched rather than because of its taste. Wouldn’t recommend.

Had this on a recent business trip to Toronto. Poured copper/amber, with very little head to speak of. No nose aside from some nuttiness and biscuit. The flavor profile was even worse; no hoppiness or fruitiness to speak of. Very thin too; watery. Some may thing that this is sessionable, but I had difficulty finishing just one.

Well, the color is suspiciously pale, light straw colored, faintly hazy, a white quickly settling head that leaves little lacing. Does not look like an IPA!

The smell is faintly acid - nothing what I expect from an IPA.

The taste has a bit white bread sweetness upfront, some lemon sourness, no bitterness. Still no IPA vibes!

Rather high carbonation, a bit watery, rather simple body.

No, this is not an IPA, it's really not a good beer by any expectations. Avoid it!

I'll admit up front that I'm not a big IPA fan. I don't like overly hoppy beer. It does not make me hoppy [groan].

Anyway, things started terribly for this beer. The appearance almost made me not want to drink it. No head, artificial-yellow, almost like electric pee. Yeah, gross.

Smelled slightly skunky, and that was it. Very faint scent, may not have even noticed if I didn't plan on reviewing it.

Glad I stuck with it through the smell and look--this beer tasted alright. Hoppier than I care for, but not overly so. I tried to judge it based less on my personal tastes and more on a "what would an IPA lover like Madhopper like." I think Madhopper would appreciate this beer.

Mouthfeel was "meh." Nothing offensive, nothing stood out.

Drinkability was above average. I put away the 473ml can with no problem, and wanted more. Surprisingly smooth for what it is. I would gladly drink this again and again.

S - Next to no scent at all. Some light malt and grain with a touch of hops. Underwhelming.

T - Slight bitterness, not overly hoppy, but lacks a lot of hoppy flavor one would expect from an IPA. Light malt is there, but barely.

D - Drinks like a lager. Decent, but nothing exceptional at all.