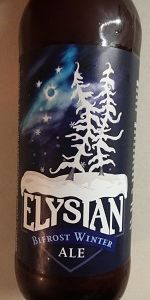 Bifrost pours a hazy copper color, with chunks of stuff, and a small lacing head. Aroma has a nice orange note, hint of cinnamon. Flavor is earthy, malty, nice orange notes, and sweet spices. Thick, but nice body and feel. Overall, a nice beer, some nice spiced flavors, good hints of orange, all on a earthy backbone.

Pours a finger of dense, pillowy white head into my Boston Lager glass. Retention is great so far, nearly the entire head remains after a few minutes. Initial lacing looks very nice as well. Body is golden bronze, a little cloudy, with a shit ton of bubbles coming up. Looks very nice so far.

Nose is citrus, hops, light notes of bread. Maybe some faint caramel. Not my kind of winter ale, but I can probably dig it. Despite the few clear aromas, this nose is quite small. All in all not bad.

Interesting flavor, way bigger than the nose. Noticeable caramel is followed by even more prominent citrus. A little alcohol in the middle. Finishes with some bread. I don’t love this, but it’s pretty decent.

Body is pretty substantial, medium-high thickness. Pretty effervescent, the citrusy hops do a fair amount of work. That said, the carbonation is actually on the lower side, likely due to the amount of nucleation. Bitterness is maybe a hair below medium, but it drinks pretty spunky. Sweetness is here, but it is balanced quite well by the other characteristics to the point it’s hardly noticeable. Nice mouthfeel.

Drinkability is significantly better in the glass than compared to when I’ve previously had this out of the bottle, drinks far less sweet.

Appearance turned out very nice. Head was tenacious, and lasted a very long time. Lacing was thick all the way down.

Overall a pretty decent beer, not what I would choose for this style, but ok all things considered. Way better out of the glass, it’s like an entirely different beer.

Pours dark gold. Smells like Miller light. Not good. Rank bitter flavor. This is not a winter warmer it's a disappointment. For shame.

Worst beer I have ever tasted. Wife poured hers down the drain. I drank mine because I paid for it. Sorry Elysian folks. Burn this one and start again.

I am not a huge fan of the Winter Warmer style, so take any comments I make with that in mind. It starts off a bit hoppy and has a definite citrus flavor. Not a super strong or annoying taste, The finish is actually not bad at all. You really do not taste the 8.3 ABV so be careful if you are slurping several of these!

This one smells like pure malty bread water but the retronasal... oh yeah there isn't a fucking retronasal. Just malty with a little fruity sweetness maybe they were going for some kind of Christmas fruit cake.

It starts off with some hoppy bitterness but soon turns to sweet malts before it turns back to bitter hops.

The bitterness stays long after the beer is gone. When it is in your mouth it's prickly with fizz. It's dry and clean.

It's a good beer, balanced with good flavors. It's nothing spectacular but I'd give it a 3.9 out of 6.

L: Hazy golden / copper with a pronounced slightly off white head. Strong lacing, head has no intentions of leaving.

S: Very noticeably citrus, having a tough time picking out much else.

T: Moderate bitterness that lingers fairly long turning from citrusy to somewhat piney. No signs of the higher ABV.


Very solid winter beer although the only thing that makes this feel seasonal is the bottle label and higher ABV. It's much simpler and easier to drink than others but be careful (or not), this could be an easy "session" around the fireplace beer.

Appearance: Pours a medium light, clear orange color with a strong white head. SRM of 13. Pours much lighter than expected. (3.50)

Aroma: Mild aromas of caramel, red fruit and some faint orange citrus underneath, but leans malty. Some caramel candy and alcohol underneath for sure with some spice.

Flavor: Flavor follows with a strong caramel, red apple and bready sweetness upfront that follows into a spiced pine and alcohol bitterness to finish.

Feel: Heavier bodied. Mild carbonation. Finishes malty and sweet with a massive pine bitterness on the end to finish bitter among the strong malts.

Compared to Sierra Nevada's Celebraiton IPA 12/13/20: Pours a slightly lighter color even. Similarly mild aromas. But this one has more caramel and alcohol. Less pine soap and citrus. Very similar aromas. Flavor is similar too, but more caramel malts and alcohol burn on the back-end here. Less balanced. Winner: Celebration

Overall: This one drinks like a heavier and boozier IPA, an imperial IPA. Nice caramel, apple, orange malt flavors balanced by a vague hoppy bitterness. Strong caramel and alcohol within the body to finish with a bite. The booze is present at 8.5%. As others have said, this one drinks more like an imperial IPA or even a barleywine. The caramel flavors come first, followed by the hops and alcohol bitterness to appropriately balance them. Overall, it finishes into a massive malt and hop bomb. Enough to give anyone a little palate fatigue. Really hard to characterize/rate this beer. The stronger alcohol I dislike, but underneath I don't think the flavors are bad. Nice flavors, but the alcohol is offputting. Not terrible, but I'd grab Celebration over this which is saying something. (Final Rating: 3.60)

Look: Opaque burnt orange and my sloppy pour yields a huge, billowing head that pillows up to two fingers and leaves great lacing as it settles
Aroma: Citrus fruits, pine sap, big bready malt notes, and earthiness
Taste: Earthiness, pine, and citrus fruit hit first and the earthy and pine notes are much more in the forefront here than they were in the nose which is very citrus-dominate. Layers of warm bready malt combine with the hops and a little booze to hold through to a bold, hoppy and slightly hot finish
Mouthfeel: Big and full – almost chewy, medium-high carbonation, moderate dryness and detectable alcohol heat on the finish
Overall: I dig it. I’ve liked and have been drinking this beer for years and it’s somewhat unique for a winter seasonal but like most, definitely big enough the keep warmth in the belly and body. A hoppy, lighter-colored-malt strong ale. A little big ABV-wise for my usual liking these days but to me, that aspect is half the allure of this beer. Delicious

Poured from a bottle - not quite clear dark copper/orange with white head leaving frosty lacing.Nose is a mix of mild malt and whiffs of hops. Taste follows with a slight sweetness and a mild hop bite. Finish leaves a lingering mild bitterness. Not really a winter warmer IMO, more of a modified pale/ipa.

I love this beer. FIVE STARS. I don't like most beers. Elysian Bifrost winter ale. One of my favorites. Idaho, USA needs more winter ales.

Ok I'm not much into the ratings via smell look taste yadda yadda yadda but I will tell you this, this is a really really good beer and my favorite beers are winter ales and imperial stouts. This beer isn't as heavy as other winter ales, but it is extremely tasty and easy drinking!! 8.3% alcohol and smooth as brown sugar!! Definitely recommend and I've tried about 50 Winter ales! I was so happy to get 3 of these for $3 at a local store in Orange City, FL (Dale's Ales) and couldn't be happier. I live in Orlando and have had the hardest time finding good winter ales this past season. I love the malty ales and this one is extremely smooth and has butter toffee undertones with brown sugar notes IMHO. I see others posting citrusy,,but I taste more malt and toffee! Fantastic beer! I honestly cant believe that this isn't higher rated for it is better than most of the Winter Ales I have had and not as heavy (Although 8.3%). Huge recommendation! Thank you Elysian! Although you arent from New Orleans,,,I love the beer!! Fast Eddy

12oz bottle Experience By 04/28/20 poured into becher glass at fridge temp 8.3% ABV. The beer pours hazy orange amber in color with off white head. The head recedes to a thick ring and leaves a little lacing. The aroma is mild with caramel malt and vague hops. The taste is semisweet caramel with pine & grapefruit peel before a moderately bitter finish. The mouthfeel is medium bodied with average carbonation and a mostly dry finish. Overall, very good beer. I would classify it as a DIPA. No trace of spice, rich malt or any other winter warmer trademark.

Had on tap at Darrell's Tavern Shoreline, WA

Pretty decent beer, with decent ABV. Nothing too special, but got a deal on buying four six packs so it came to like eight bucks a six pack.

Mouthfeel
Medium-full with moderate CO2 and no harshness or astringency.

Poured from a bottle into a pint glass, giving a couple fingers of white head. Golden color, only slightly hazy. Slight citrus smell, with the taste pretty citrus heavy. Not too bitter. Pretty light and moderate carbonation.

A - cloudy body of amber under 2 fingers of off-white, lots of suspended sediment, moderate visible carbonation

O - more like an IPA than expected; not bad