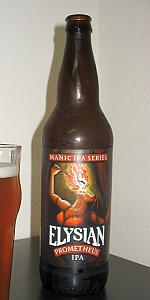 I figured I should probably drink this before going and seeing the movie, 'Prometheus,' since I was in Seattle seeing it. So... yeah. That was pretty much the motivation behind picking it up.

Pours an absolutely beautiful rich amber with a finger and a half pillowy white head that dissipates after a while, but laces the glass beautifully as I drink. This is what I imagine beer should look like.

The nose is a huge letdown after the beauty that is in the eye of the beholder (beer-holder?). Didn't notice too much in the aroma; a mild floral hop presence with a little bit of caramel biscuit malts underneath, but nothing really pronounced.

The tongue follows the nose, but at least a little more present. Initially a little sweet, then the malts want to come in before being preempted by that same floral hoppiness. Well balanced, but not very hoppy, especially for something coming out of the west coast.

AMAZINGLY smoothe. Goes down like velvet. Being as the hops aren't particularly strong, there isn't much of that cloying bitterness remaining on the tongue, which I'm perfectly fine with. Overall, not gonna be the IPA your standard hop head reaches for, but eminently drinkable. Potentially a good intro IPA for someone not as ready for the bitter bombs that so many 'advocates' seem to require to bestow that label of India Pale? I'd drink it again, especially if I were at the brewery/restaurant and had the opportunity to try and pair it with certain foods, but won't be rushing out immediately to replace the one I am currently drinking. Give it a try, especially if you're looking for a smoother IPA with a good balance of sweet with not too hoppy.