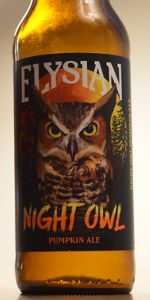 Notes: Brewed with 150 lbs. of pumpkin in each batch. Made with Pale, Munich and Crystal malts green and roasted pumpkin seeds, pumpkin in the mash, boil and fermenter. Bittered with Horizon hops. Spiced in conditioning with nutmeg, clove, cinnamon, ginger and allspice.
View: More Beers | Place Reviews
Recent ratings and reviews. | Log in to view more ratings + sorting options.
Rated: 3.96 by Ernald_Elbertson from Delaware

T: Lots of pumpkin pie spice, including nutmeg, clove and cinnamon, lots of spice not a ton of pumpkin.

O: Just like most pumpkin beers, this beer is more spice than pumpkin.

Reviewed by ThirstyLion from New Jersey

With that, out of the way, it's exactly what a pumpkin beer should be. It has real pumpkin in it and the flavor comes through loud and clear. And there's lots of different spices which need to be in there as well and they are.

It's a very drinkable beer. I've seen reviews that suggested it isn't. I easily drink three pints, poured and frozen mugs and it was absolutely delicious.

As far as the level of the different spices, I have seen several reviews that say the beer is too strong, but I would contest that a bad pumpkin ale is destroyed by the spices or it doesn't have enough spices or instead of using real pumpkin, you get artificial pumpkin flavor.

Night Owl is 100% legit as a pumpkin beer and the flavor is full throttle. You're going to get some wimpy spices like nutmeg and cinnamon mix with hints of allspice, clove and mace. In no way is it too strong or too spicy. I would say that it's just on the higher level of what a pumpkin beer's profile should taste like and for me, the 150 lb of pumpkin per batch is a big reason to like this beer. The pumpkin comes through and it's genuine and it's real.

As far as how this beer stacks up to other pumpkin beer's, I put it very near the top of the heap. I also think most people who are looking for a pumpkin flavored beer will probably like this beer. I served it at a Halloween party and every single person who had it raved about it and commented about it and wondered what it was and who made it, so it seemed to have gone over quite well.

3.72/5  rDev -5.8%
look: 4.25 | smell: 3.5 | taste: 3.75 | feel: 3.75 | overall: 3.75
Really attractive clear dark amber appearance.
Body is about medium with the carbonation being the same.
Aroma is very light and actually wasn't very appealing, sort of an artificial smell.
Taste was malty bread,doughy, mildly sweet with a perfect amount of spice that lingered but didn't dominate.
Overall it was one of the better pumpkin beers I've had

Fairly light in terms of a pumpkin ale. Pumpkin, cinnamon, vanilla, and spices.

I don’t like the feel here, but otherwise it’s a decent pumpkin ale.

Reviewed by BKotch from Texas

4.1/5  rDev +3.8%
look: 3.25 | smell: 3.75 | taste: 4.5 | feel: 4 | overall: 4
Slightly hazy/cloudy amber color with a modest off white head that fades quickly.
The aroma is pumpkin followed by ginger, cloves, allspice, nutmeg, cinnamon, the whole pumpkin pie family.
The taste is in the same line with an addition of some brown sugar sweetness to balance the spices. While it is somewhat over spiced for my taste, it is very well balanced and the slight sweetness mellows it enough to enjoy.
The body is medium/full, modest carbonation and nicely smooth like biting into a pumpkin pie, if they had just added some lactose (I like whipped cream on my pies) this could be liquid pumpkin pie.
Altogether, this is one of the better pumpkin ales I have had.

Reviewed by SteveTheDog from Texas

4.27/5  rDev +8.1%
look: 3.5 | smell: 4 | taste: 4.5 | feel: 4.5 | overall: 4.25
Look: Golden light ale pour from a pack of variety sorted pack from Vons. slight lacing as the foam dissolves.
Smell: Ge33tting notes of cinnamon nutmeg and spices along with vanilla and malts.
Taste: the nose follows the tongue except sweeter. Out of the pack this one is the best one by far because of the sweetness it delivers.
Feel: Medum bodied/ very easy to down. Be careful as this one is rich and easy to down.
Overall: I didn't think this would be as good as it was but damn. it's very easy to down, slightly rich and isn't to strong alcohol wise. Very nice!!!

Rated by BEER-NICK from Pennsylvania

Reviewed by dream from Nevada

Reviewed by Shelbs90 from Montana