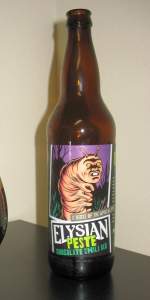 Peste will plague you with the rich flavors of cocoa, chilies and cinnamon. A blend of Peruvian cocoa, Ceylon cinnamon and chipotle, guajillo, pasilla, ancho and cayenne peppers make this beer a unique distraction from the approaching end of the world as we know it.

4.54/5  rDev +29%
look: 4 | smell: 5 | taste: 4.75 | feel: 3.5 | overall: 4.25
For a long time, before I started The CANQuest (tm), before I became a "serious" beer writer, I was "The Beer Pest(e)" with an irregular column detailing my misadventures with beer. It was especially apropos as I had one column that personally incensed Dick Cantwell! All is forgiven, or so I am told. Such was never my intention. I really wanted the entire series in this lineup, but our distro from Elysian here in PA was spotty at the time of release. 8=( I am a HUGE fan of Charles Burns & his work so this should be interesting.

From the Bottle (!): "12 Beers of the Apocalypse"; "Peste Chocolate Chili Ale"; "4 Black Hole Peste"; "If the world were coming to an end, what beer would you brew? Utilizing artwork by Seattle native Charles Burns from his graphic novel classic, Black Hole, Seattle's Elysian Brewing and Fantagraphics Books team up to answer the question with The 12 Beers of the Apocalypse."; "Beer #4: PESTE Chocolate Chili Ale brewed with cocoa, cinnamon and a blend of chipotle, cayenne, ancho, guajillo and pasilla peppers. Infectiously good - Pass it on."

I Pop!ped the cap & started a slow, gentle C-Line pour into the awaiting glass. Unlike others, I was surprised by the formation of a finger of roiling, fizzy, foamy, deep-brown head that quickly fizzled into an oily skim of wisps. The beer was infused with all manner of chiles! What did you expect? Sheesh. Color was Very Dark Brown to Black/Opaque (SRM = >34, < 44) with cola highlights throughout. Nose smelled like one of those cinnamon hard candies, the ones that were like a dare to suck until they melted away! 8=O Mouthfeel was thin-to-medium. The taste was an initial blast of spice! I generally fight with my sinuses, especially in the Winter, but tonight, they were totally clear. 8=( I felt an eruption of heat through my nostrils, behind my eyeballs, in my ears. Phew! My eyes were watering uncontrollably & my ears were really ringing (tinnitus in the L ear). Wow. My tongue felt as though it had been flash-seared. My ever-expanding bald spot was covered in a sheen of sweat. Oh my. Fortunately, I had the foresight to take a GIRD pill before starting in or I might have been hitting the Panic Button. Wahoo! The chocolatiness was almost, but not quite, lost in the heat. I began to taste it, but only once the heat gradually subsided. I was not their target audience for this one. That honor would be conferred onto my younger brother, "Young" Gefe, who scarfs down wasabi as though it is nothing! He might have really liked this, but he resides on the West Coast & for me, no time like the present, especially now in the face of COVID-19. Man, over time, the spices had simply mustered their forces & shoved the chocolate out of their way. This was packing an intensity that I am unsure they intended. Frankly, I was lucky that the bottle did not shatter. I've had some that have done so. The peppers cause a reaction, refermentation (?) and BLAM!, gone. 8=( Finish was peppery-hot & extremely dry y extension. The chocolate reappeared intermittently amongst the unrelenting heat. Phew! I won't soon forget this one! YMMV.

Reviewed by LouZ from Washington

3.5/5  rDev -0.6%
Bottle.
Appearance: flat cola. No head.
Smell: molasses and dried chili peppers.
Taste: dark malts with a bit of heat from the chills.. Especially in the aftertaste. A touch of cinnamon.
Mouthfeel: medium carbonation. Medium-heavy body. Heat from chili peppers.
Overall: not a bad beer. Definitely one and done though. The chili peppers dominate the palate. Meh.

Feb 22, 2014
Rated: 2 by Thesoundandthefury from Washington

Reviewed by scottbrew4u from Pennsylvania

4.19/5  rDev +19%
look: 4.25 | smell: 4 | taste: 4.25 | feel: 4.25 | overall: 4.25
Beer was served in a tulip glass with an opaque, black color and a two finger frothy tan head. Some lacing develops on the glass as it goes down. The aroma is of dark roasted and burnt malt with intense chili pepper notes and rich, dark chocolate with hints of dried plums. Hops are not really making there presence known in this beer.
First taste the chili brings a heavy hit of spice that comes riding on the remaining head. The flavor quickly unfolds to layers of chocolate and cream with a rich malty backbone. Hops silently add balance and leave the finish on this beer not too sweet. As this beer continues, the heat from the chiles becomes more faded and the rich layers of malt shine. Velvety smooth mouthfeel with a medium to full body body and creamy carbonation. Alcohol is well hidden in this flavorful beer.
This is a must try for any lovers of spicy foods and lovers of stouts. A great idea for a beer this is well made and in balance and would be a hit for desert as well.

3.5/5  rDev -0.6%
look: 3.5 | smell: 3.5 | taste: 3.5 | feel: 3.5 | overall: 3.5
A: Pours a slightly hazy dark cola brown (like a Coke) in color with minimal amounts of visible carbonation and some very dark amber highlights. The beer has a very thin beige in color that quickly reduces to an extremely thin ring at the edges of the glass. Minimal amounts of lacing are observed.

S: There are light to moderate amounts of chile spiciness that intensifies as the beer warms.

M: On the lighter side of medium bodied with light to moderate amounts of carbonation. Slight amounts of spicy heat that builds as you drink the beer.

O: The spiciness of this beer builds in intensity as you continue to drink it and it intensifies after each sip, also it lingers for a good while. It reminds a bit of Mexican hot chocolate but with a lighter amount of chocolate.

3.54/5  rDev +0.6%
look: 3.75 | smell: 3.5 | taste: 3.5 | feel: 3.75 | overall: 3.5
A: The beer is nearly jet black in color - traces of brown are visible near the edge of the glass when it is held up to the light. It poured with a thin off white head that disappeared almost instantaneously, leaving only a thin ring of bubbles around the edge of the glass.
A: Light aromas of chilies and other spices are present in the nose.
T: The beer doesnt start off too spicy, but the chili spices start kicking in towards the finish and linger through the aftertaste. No chocolate flavors are noticeable.
M: It feels medium-bodied and somewhat dry and spicy on the palate with a moderate amount of carbonation.
O: Compared to other beers in the style, this beer isn't that difficult to drin because the chili spices aren't overpowering.

Reviewed by AdamBear from Pennsylvania

S-dark chocolate syrup with a hint of spicy chili. It's a pretty faint scent.

T-comes in with a surprisingly spicy of red chili pepper and dark grains. It's almost watery too though somehow which is making this almost disappointing. I love the amount of spice it has though. Has a nice cocoa after-taste to it.

O-I always get so excited for chili beers. I was not completely let down by this. I hated the watery aspect to it, but I loved the heat! I was a fan of the chili flavor and that it lacked any smokiness common in chili beers.the cocoa was kept to a decent amount but could've been stronger.

Reviewed by oline73 from Maryland

Pours a very dark brown with a quarter finger of off white head that disappears quickly. There are lots peppers in the nose, but it's a hot sauce sort of burn with a note that reminds me of cumin. Roast shows up in the smell, but the pepper dominates. The taste is full of hot peppers. The cumin shows up here as well. The roast shows up behind the heat with some dark chocolate as well. The finish is quite hot. The body is a bit syrupy and the carbonation bubbles are large.

This is a rather hot beer, but the pepper burn was unusual. Reminds me of hot sauce.

Reviewed by sam_bliss from Washington

A- Not super impressive. Good dark color but the head didn't stick around for long.

S- Smells of bittersweet chocolate. A bit of heat is detectable in the aroma, but nothing could have prepared me...

T- On the tip of the tongue there is a bit of sugar, but the chocolate malt/dark chocolate taste is only detectable until the chipotle, guajillo, ancho, etc peppers kick in. They kick hard and hold the tongue and throat hostage for quite some time. The cinnamon doesn't go well with the chile flavors and probably even adds to the spicy.

M- Burning sensations mostly. It's difficult to pinpoint many other details of the mouthfeel because my mouth was on fire. No stickiness.

O- It is ridiculous to try to put a numerical score on this beer, since it is so unique. I have had a few chili pepper brews but never anything as spicy as Peste. The apocalypse occurred on my palate. I will not try this again, but I am quite happy I ordered it for the experience. I recommend you try it if you can handle spiciness.

If they decide to brew a batch without the cinnamon or with some vanilla creaminess I would try it again.