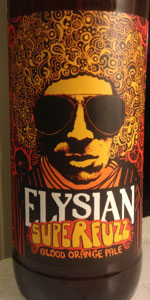 Kind of a dull yellowy-orange in shade. Very hazy. Later, evinces its clarity, with small flakes sunken and even smaller flakes still in suspension. Small, low to medium-retention off-white head. Grapefruit, sweet orange, mango, lemon rind, and black pepper aromas. Sweeter on the palate than I remember (over a year ago that I first tried it), although maybe that is a matter of just being more used to citrusy hops by now. You can definitely taste the orange, although if a person didn't know any better, could be mistaken for just an extreme hop character. Other flavors, this time hops for real, include grapefruit, mango, and strong peel or rind. Has a fairly crackery underbelly, and a noteworthy peppercorn showing. Aftertaste is all rind. The immediate dearth of sweetness after the swallow is almost a flavor in itself. Medium-bodied, nice and thick and smooth for the style, plenty of mostly sudsy carbonation from start to finish. It's different, and I've accounted for that in my score. Better than most pale ales if you're a hophead (which I am), and better than a lot of IPAs if you really like citrus (which I do), but deserving of some demerits relative to top shelf (I)IPAs.

Maltier version in terms of smell compared to the Sculpin' Grapefruit IPA. Much lighter, small head, and depressing lacing. But drinkable and I actually would do this beer again because the hops are relatively solid.

Looks yellow to orange and cloudy. pieces of peel at the bottom adds a little funk:)

It is a pale ale, but thanks to the blood and orange juice (or whatever is in there), it tastes less hoppy than the usual pale ale. Still not a guzzler by any means, but that's OK. Consistent taste right to the end. The blood and orange is fairly subtle. Worth a second test, but not a must have. 2015/05/21

A- a cloudy light orange with a thin off white head, decent lacing.

S- Ruby Grapefruit with a crackery malt base. Hint of pine.

M- lighter side of medium, plenty of carbonation.

O- Great twist on a pale. Very nice on a hot summer day.