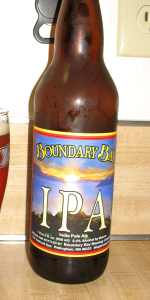 Bought this in a bottle at Rivertooth Beer and Wine in Shelton, Wa at the bottom of the Puget Sound. The guy there told me that it was about as far south as this stuff regularly makes it so if you are looking for a bottle of it that is a good place.

-I loved the appearance of this beer. It was a bit darker than the I.P.A.s I am used to. The difference is good. A darker red color. It looks amazing. The head is so creamy looking that if you looked from above it looks like a root beer float or something. That head dissipates throughout the drink but makes a good lace down the glass throughout the whole session and still has a bit of that creamy top almost until the last drop.

-The smell is beautiful. Probably not much different than most of your hoppy IPA's of the Pacific Northwest, though I would say a bit sweeter of an aroma.

-Concerning taste I have read on other reviews of this beer that it isn't your typical Northwest IPA and I would agree to an extent and also add that that isn't a bad thing. It does have a slightly less hopped up finish with a sweet taste almost of nectar. However, it does have the bitter hops present that we all know and love and overall is incredibly tasty.

-An almost perfect mouth feel for my standards. Not to heavy, not too light, perfect carbonation throughout the entire beer including a bit of foam left from the head remaining until the bottom of the glass but not enough to be too much. Feels like an IPA should IMO.

Overall, I believe it to be a worthy beer. If you are making a decision between a few brews you have not had before then I would say to go ahead with this one. You won't be disappointed. I may not buy this specific brew again but it was my first beer from this brewery and i will definitely not pass up trying more of their beers after trying this one.

Mediocre ipa. Nothing special at all

This is a great IPA for those of you that have not tried it yet. Boundary Bay IPA is definitely well balanced. The hops compliment the malts, and there is a great balance with the ABV. If I remember correctly, it finished 8th in the nation, of over 350 breweries, in last years IPA contest.

Good IPA from Boundary Bay. Nothing spectacular, but no fancy trimmings are necessary with this little workhorse ale.

First time having a Boundary Bay brew. Poured from a growler into a tall chilled glass.

Appearance - It has a darker look compared to most IPAs. A tiny bit cloudy, looks almost like honey.

Smell - A great sweet aroma. Almost smells like honey too.

Taste - I really admire the taste of this IPA. Very sweet yet maintaining that nutty English hop taste of IPAs.

Overall - I really like this beer and plan on trying some more Boundary Bay brews in the near future; especially since I am so close to Bellingham.

A — Pours a honey caramel hue into the glass, there is an off-white colored head that is quite tall and leaves behind some solid bits of lacing.

S — Smell is pungent, piney, bitter, and juicy, this is much better than expected. A resinous and piney overtone on top of a small and slightly sweet caramel base.

T — Piney, citrusy, juicy, bitter, astringent. Nice and bitter resinous pine on top of a caramel and semisweet base.

O — This is really quite good. I don't often order it on tap at Boundary, but I will make sure to reintroduce it into the rotation.

i had higher hops for this, after really digging some of their more ambitious beers in the past. this looks like their flagship, and it tastes like it was born a couple of decades ago, malty and bitter, without a ton of hop flavor at all, and a somewhat fuller body as these go, even though its not objectively sweet or anything. i had it at an old irish pub in spokane, and it tastes a bit like the lines may not be amazingly well maintained, so i wont be too harsh on the beer overall, except to say that its a dated recipe for the style, especially in this part of the world. some sharp citrus in here, bitter pithy orange and grapefruit, a little bit of a grassiness there too, but it doesnt seem all that fresh, and it certainly isnt distinct. enough crystal malt in here to cover up the hop nuance, im not even sure i can recognize a varietal in it, and there are lots of minerals here at the end, almost enough to make it seem a little metallic. i like the balance, always have in these sort of beers, but there isnt enough here to bring me back after this pint or two, its generic now, even if that wouldnt have always been true. ill look to try this again sometime in another place where perhaps quality is a little better looked after, but im expecting a similar experience. good bitterness, some pine at end end, malty depth and body, but it leaves something to be desired in terms of hop flavor overall...