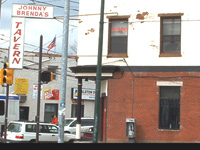 View: Place Reviews
Reviews: 25 | Ratings: 41 | Log in to view all ratings and sort
Reviews by JohneHoodlum:

I knew about Johnny Brenda’s as beer-focused bar but didn’t know it has an active program of live music. There we went to enjoy singer-songwriter Greg Laswell play his mellow songs on a Saturday night.

Brenda’s is a rather massive endeavor, an entire building with three floors and several bar areas. The ground-floor bar was busy and super loud, not a pleasant place to hang out (call me old, I don’t care). Lucky for us, the second floor (where the stage is) was much quieter and cozier. They have a photo-booth! Sadly, the sound system was atrocious, and Laswell’s smooth, whispery tunes were almost lost.

The beer is good, though. The bar we were at near the stage had 10 taps of all-local/regional stuff, including SlyFox, Neshaminy, Flying Fish Exit 16 and Exit 1, Golden Monkey, PBC Kitty Pleasure, Troegs, Weyerbacher, Brew Works. Service was alright but not great (slow bartender, slammed bar before the concert) and prices are acceptable.

Would I return? Probably not... Kraftwork is only a five-minute walk away and it suits me better.

Our final stop in the area was Johnny Brenda's. Heard a lot of good things about this place so I was looking forward to checking it out.

We got seated in the corner downstairs at a large table. Draft and Food menu right above our table. Place was pretty dead but it was a sunday. Pretty good draft list but nothing over the top. Service was decent, he came around enough I guess. I decided to go with the grilled caesar salad and two cheddar biscuits on the side. Salad was ok, could have skipped the whole deconstructed thing and just given me a real salad, but the biscuits were even better.

Overall a place I will definitely return to at some point. I am really looking forward to checking out the other areas this place has to offer.

Located at Frankford & Girard. For a small concert/show venue, this place has a mighty good beer selection of mostly local Philly / PA brews, and three quality bars--one on each floor including the balcony. Not a HUGE selection; about 12 rotating draughts, and all good beer, with typically one or two cask-conditioned brews. The food is fairly decent overall, and the menu seems to be improving. If you have some coin to spare, the brisket is probably the best thing on the menu, and the steak sandwich is damn tasty. Definitely worth going to early if you're seeing a show there. Friendly and knowledgeable staff.

Because of the atmosphere and the beer selection, I think it's safe to say this is my favorite venue.

Went here for a music 'event' and some local beer. I've been meaning to stop here forever.

From the outside Johnny's looks like your average run of the mill Philly corner bar and to an extent, it is, but they serve great local beer. Downstairs is a bar area with pool table intact, about 15 bar seats, in the back a more relaxed seating area with i guess table service. Upstairs another bar but a bit smaller, with the stage area towards the left and a small pit holding about 70-100 patrons or so. Going upstairs again a balcony area with you guessed it, another bar thats smaller than the others. The balcony had about 50 or so people up there. I watched the show (95' hip hop) from here. The place was full of douchbags, but there was some nice trim up in there, although alot of the girls I met had coke running at the bottom of their noses.

I had a bunch of Sly Fox Royal Weisse beers and called it a day. The quality was good that my beer tasted good and not dirty. Cant comment on the rest of the bar though, because from the looks of it, JB's is not the most upkept place. My beer was in a plastic cup but because of the 'show' I understand that, there was some proper glassware there as well.

Service was good for a packed house, no real wait for beer.

The selection is all local beer and that fills a niche in the city because everybody has a import or two wheather it be from Belgium or cali. The farthest I've ever seen this tap list travel is Flying Fish Brewing in Jersey. About 12 taps in total, some cans, some bottles, pretty simple. This place gets the cream of the crop of special local beer releases during Philly Beer Week, once they had four Troegs scratch beers on tap at once (i ccould not attend, kicks rocks, damn you roggenbier, I'll get you someday). Keep it local.

I did not try the food.

The draw at Johnny Brenda's is a constantly rotating offering of local and local-ish beers, and when you're in the heart of Philadelphia, that means a selection of some of the best brewers in the country. The night we visited they offered selections by Sly Fox, Flying Fish, Yard's, Philadelphia Brewing Company, Troegs, Victory, Dock St., Dogfish Head, and others. Good variety amongst all that too, style-wise.

Staff were not the friendliest, but that's based mostly on one interaction with one fairly uninterested and probably stressed bartender (they were pretty busy, it was Friday night). They had a girl DJ'ing, and despite the fact that the music may not have been to my own liking, even if it was, it was WAY TOO LOUD. I'm hardly an old man who can't take loud music, but it affected not just the conversation, but the overall enjoyment of the beer and everything else. The atmosphere was dark-ish (good!) and the place is a long hall with a couple different rooms to wander through. A good time, if a short visit, with an amazing beer selection, but geez...turn that stuff down so we don't have to shout at each other while talking. Save that for the crappy sports bars of the world...

The outside and inside appearence screams hipster dive bar, but the beer menu needs a look over before you can judge the place. Decent, al be it limited selection of local craft beers but they are always on point with the limited or seasonal releases. Food is slightly above average with the free home made beer jerkey and oyster crackers at the bar satisfying enough to skip the main menu. Service is usually on point. Decent spot when in the hood for a pint or two, but unless there is a band on that id like to see, no need to rush back.

A pleasantly divey little treasure in a defiantly scruffy neighborhood. The atmosphere is rough, with an old-timey corner bar out front, a bland dining room in the back and a strange, dark little nook in between featuring tables embedded with shifting colored lights. The food is good, if relatively basic (I really liked the Cuban sandwich, the smoked salmon was less successful). The beer list is terrific, with a dozen or so well thought out selections, including when we visited Weyerbacher's Echo and Troeg's Nugget Nectar. There is even a decent, if limited, wine list. Service is perky and friendly.

I love music, this is my new favorite small place to see a show (puts the khyber to shame)

same owners and standard tap, they have live music and dj's upstairs and downstairs is a giant bar with tables
the people that work here are nice

It is owned by the same people who own standard Tap, the food is pretty good and cheap

the beer selection while good and ecclectic, sometimes doesnt always taste that great upstairs ( I dont know if they clean their lines as much as they need to)

This is a nice bar/ concert venue in the Fishtown section of Philadelphia. I never tried the food here but go to lots of concerts here. Local promoters R% bring a lot of good band here for less than $20 so I am here a lot. The selection is focused mainly on local beers all served on-tap. Every once in a while they get special one-off and have cask-conditioned ales. Also, they have pool tables which are always nice to find in the city. The service is decent but again I never ate here just had drinks at the bar. A little out of the way but a cool place to xcatch a good show and drink good beers.