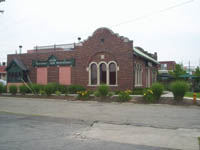 I have some friends who have graduated already, so every single time they come to town, we head straight to Brazenhead. The burgers are awesome, some of the best in the city. The beer selection is pretty solid, though I wish they had a more diverse draft menu. We always grad the small little room in the back. It is a great place and is a really good place to catch up with my old friends

My bosses and I like to stop in here for after-hours meetings from time to time. We went in last Thursday, and it wasn't too bad. They had live music, which was awful, but won't factor in too much. The service wasn't as good as normal, but still acceptable.

The selection isn't overly impressive, but it is fairly decent. Most of the time it doesn't take too long to get your order, but every once and a while the servers will walk past your table three times without bringing your bottle and glass.

The food isn't too bad; I haven't had a whole lot of stuff off the menu, but everything I've tasted has been decent. Overall a good place to catch up and have a couple brews.

We will stop here for lunch every one in a while. It is one of the better Irish pub influenced restaurants in Columbus (there are A LOT of them). Their pub style fare is a bit better than other places in town. They have create your own burger (a la Five Guys and Graffiti Burger which are both right down the street). On Wednesdays burgers are cheaper, albeit smaller, but are all you can eat IIRC.

The place is clean and new but modeled to be like an old Irish pub. There are various "snugs" and booths.

The beer selection is sturdy, but not overly impressive. They have some of the usual good stuff. CBC, GLBC, Bell's. The taps rotate out. They also have the quintessential beers from the UK. Murphy's, Guinness, Boddington's and the like. On my last visit I got a DFH 60 min. The bottle was brought to the table along with a frosted glass :-/

This is one of the better Irish pubs in town. It is a good substitute for The Pub if you dont have the time to go all the way out to Polaris.

Popped in for lunch on a hot August afternoon. We sat outside. The waitress was friendly and knew enough about the beers to offer an opinion. A few of us had the Great Lakes Independence Ale , which was pretty good. I also tried the Columbus IPA, which was also good. The draft selection was not outstanding, but there were a handful of good craft brews available.
The food was good. I had a burger, which was huge and homemade chips and tabasco slaw. Tasty and very filling. Service was promp and polite.

Brazenhead is a great beer pub in Columbus. Every time I go there I can find different seasonal selections on tap. On one repeat visit I asked the bartender why they didn't have a certain beer. Apparently the management does not like to have beers that are too popular or macro. I thought that was awesome.

The food is very good pub food. The burgers are some of the best I've ever had (and I'm a guy who knows a thing or two about burgers). Wednesday night they are only $3 and the place is packed. Get there early.

There is a basement in addition to the first floor pub. Sometimes it can be difficult to find a seat. But thats the way an Irish pub typically is.

My only complaint is the service. Servers are generally slow, and not very knowledgeable on the menu or the beers. Go sit at the bar and you should be treated well.

Very interesting design here. We came on a pub crawl, and went down into the nice cozy basement, complete with a bar, and several tvs. I saw 3 different bars, but they all had the same taps. GLBC Ed.Fitz. was the noteworthy handle that I saw. The bottle list was better, but certainly not overwhelming. Our service seemed good. I did not have any food, but some enjoyed what they had, and others did not. I would like to come back for dinner sometime. I really liked the atmosphere, and the lack of a "chain" atmosphere. Not a great selection of beers, but good.

The Brazen Head is a very nice restraunt from an architectural standpoint. Nice woodwork throughout. 3 bar areas that I saw and we were at the one downstairs. Tap selection was average and had I'd say 10 to 15 beers. The thing I thought was odd was that of the 3 bars every one had the same tap selections. With all that tap space they could have 2 times the amount of beers available draught.

The bottle selection looked good on paper but when I tried too order a Buckeye Brewing Hippie IPA they didn't have any. It looked like a few of there other offereings weren't available either. I did get a Delerium Tremens that set me back 15 dollars. Very expensive beers.

I had an appetizer of White Bean Hummus that was below average. Not much flavor and the tortilla chips served with it were not cooked all the way.

Not sure the Brazen is a destination I would frequent often unless I start making a tad more money.

I love this place. Everytime I go I curse myself for not coming more often, it's a bit out of the way from where I live, but I find that the drive is worth it. Plenty of parking across the street, and although the building looks small there is lots of space inside, never had to wait to get a seat, although the outside porch is aways completely packed. I especially like the basement if you're there to hang out with friends, they keep the music very quiet, and you can actually hold a conversation with someone.

The servers seem too busy with other things to talk beer, but if you press them they will usually lead you in the right direction. However, I never had to wait too long to get something. The selection is quite excellent, and its nice to see a place bring out proper glassware for different beers. The food is outstanding, they have the best fish and chips I have had in the city. Its close to downtown so it makes for a great starting point for activities in the city, but its even better to spend the evening there instead with friends.

Brazenhead must be loved for the fact that it often carries Arrogant Bastard on tap, as well as in the bottle along with Double Bastard and Stone IPA. The bottle selection is solid. They have Chimay, Delirium Tremens, among many other imports, and plenty of domestic craftbrews (nearly the whole GBLC line, Stone, Bells)--served in the proper glasses, Chimay goblets for Chimay Red, most time.

The atmosphere is typical pub, with a few too many frat boy types for my liking on some nights. Though$3 burger night is a must, as their burgers are certainly among the best in town.

Table service consistently is adequate, and Dan the bartender is a treasure. The food is good, though not outstanding.

The main flaw at the Brazenhead is the pricing on drafts. Nearly $6 for a Harp or Guinness--that's rape by Columbus' standards. You can get good beer and food here, but if really going on an exploration of craft beers, it's not an essential stop.

Brazenhead is located on 5th Ave east of Olentangy Rd. The building is actually kind of hard to spot for some reason. Parking is available both at Brazenhead and across the street but make sure to check the signage for hours.

The interior is bigger than it looks from the outside, there is a whole downstairs dining level. Upstairs the bar is segmented for service in the 2 main dining areas. There is the requisite "snug" for intimate dining/drinking. Lots of Irish-themed knick-knacks and breweriana too.

As far as beer, they have around 10 taps with a seasonal (Goose Island 312 being a recent offering). Other taps are pretty standard for the genre - Guinness, Harp and the like. The bottled selection is better. Rogue, GLBC, Sierra Nevada and other micros are well-stocked.

Service here varies from good to not-so-good depending on how busy they are. On my last visit the bar was pretty empty so the bartender had time to shoot the breeze about their seasonal beers and Hoster's.

The food at Brazenhead is pricey but good. From appetizers like chips with garlic butter or wings to their entrees and sandwiches they do a good job.

Brazenhead and Byrne's are a pretty good Irish one-two punch for the immediate area.

Came across this place pretty much by accident, but was VERY pleased with it.

After spending the day in Columbus, my wife and I were looking for somewhere to have dinner. Initially, she was attracted to this place because it had an outdoor seating area--but it was so crowded we headed downstairs instead.

Turns out Wednesday is "burger night"--their regular $6.50/$6.95 burgers are only $3.00 (including lettuce, onion, tomato, and cheese). They also come with homemade potato chips that were incredible.

The draft beer selection is modest: only six taps. These include the usual suspects: Guinness, Murphy's, Harp, and Killian's--but also Smithwick's. The bottle selection is a bit better, but I might be a bit prejudiced since it includes Paulaner Salvator (one of my all-time favorites).

Although the place is cigar-friendly, the ventilation system is superb. We were seated at a table a few feet from the bar where three guys were puffing away, but my wife (who HATES cigars) couldn't smell a thing. There's also a third level loft that's non-smoking for REAL purists.

The burgers were excellent--but I'll have to go back some other night for the Guinness-battered fish and chips, which also looked very good (and were obviously enjoyed by couple at the table next to us).

All in all, a most enjoyable experience!

This is a very enjoyable place to enjoy food, friendship, and beer. This nicely redesigned building features beautiful landscaping for an urban location, good off street parking, great wood furnishings and furniture along with super service and a high quality, short selection of beer.

From the time you enter you are being cared for. Whether it is seating, food or drink there is always someone nearby. The taps are fiiled with goodies like Guinness and Murphy's stout along with a variety of lagers and a good selection of bottled beers such as Anchor, GLBC, Samuel Smith, Uniboue, and SNPA.

There is a nice outside seating area for warm weather. The food is a bit pricey, but very good and filling. A great stop.

Brazenhead Irish Pub in Columbus, OH
Place rating: 3.9 out of 5 with 26 ratings