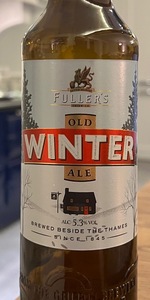 Notes: Wonderfully comforting in colder weather, Old Winter Ale is a dark and distinctive beer that wraps you in a warm glow of familiarity. Unlike most things in the season of snow, sleet and ice, it's exceptionally well balanced.
View: More Beers
Recent ratings and reviews. | Log in to view more ratings + sorting options.
Ratings by rarbring:

The smell is rather modest, som lemonpeel, slightly metallic tones, a malty sweetness with some spicy aroma.

The taste on the other side is fully developed with great hoppiness balanced with some malty sweetness.

In all a very rewarding wintwer warmer.

L- A luscious looking chestnut brown, clear as a bell, pours with a small and fleeting patch of foam. It's not my glass killing CO2; this is my regular beer glass and FWIW it's nucleated too! Presumably this is simply a trad-low low CO2 ale, we'll see.
S- Very mild, just light malt.
T- Malty, and then hops rise into quite a notably hoppy-bitter twist. That was the first sip and as I continue the hops linger on my palate between sips. The level of hops remind me of a heavily hopped trad IPA.
F- Notably hoppy-dry, in fact their bitterness rather over-dominates for me. CO2 in the mouth is good.
O- It is something different, though not really for me. It's a great looking colour but for a winter ale I'd wish it to be meatier on the malts and less of a hop-hammer on the palate. The hops mask the ABV% pretty well, so I don't get a sense of warmer from this Winter Warmer.
£2.45/500ml from Waitrose, London. For sake of comparison an Abbot Reserve (another premium London ale) is £1.70/500ml from the same shop. BB: 1/Dec/22.

3.9/5  rDev +0.3%
look: 4.5 | smell: 3.75 | taste: 3.75 | feel: 3.75 | overall: 4.25
Fuller’s Old Winter Ale is crystal clear and deep copper colored, with reddish highlights. Thin streams of CO2 support a packed, cream colored head with decent retention.
My first impression of this beer’s aroma is that it’s very malt forward with a notable brown sugar sweetness. It’s a much richer aroma than I was expecting. Malty sweetness moves quickly into a center I find leather, earth, and a sort of rum and raisins quality, only without the raisins. Overall, Old Winter Ale’s aroma reminds me of something that might have spent time in a barrel, though I can find no evidence of this actually being the case. Somehow, it the malt, sweetness, and rum notes all combine to remind me of Christmas without smelling of the usual Christmas spices or aromas.
Taking a sip, Fuller’s Old Winter Ale is smooth, with very restrained carbonation. It’s malty up front leading into a center that is offers flavors of both nuts and leather. In that sense it reminds me of an English brown ale. Brown sugar sweetness is there, but more subdued, taking a supporting role next to the other flavors. All of this leads to a crisp bitterness that is very English in nature. Which is to say, earthiness and peppercorns rather than citrus and pine. Definitely the right choice for a traditional English beer.
The flavor and aroma on this beer are very much what you’d expect in a winter ale. Specifically, it smells and tastes like Christmas. But at the same time, it smells and tastes like a well crafted English ale. That balance makes this a very good beer to have during the Christmas season or at any time during the winter season.

Rated by matuto from Brazil

Reviewed by craftbeersweden from Sweden

It´s absolutely ok but not what I want...
I think I have a few bottles left. Maby they will pair better with some Christmass food - We'll see!

Reviewed by Jetulio from Spain

Reviewed by Fatehunter from Oregon

3.54/5  rDev -9%
look: 5 | smell: 3.5 | taste: 3 | feel: 5 | overall: 3.5
Pours two fingers of head on a clear dark straw body.
The aroma is caramel and spice.
The taste has nice caramel sweet to start with an interesting bitterness in the middle to end.
The texture is smooth with low carbonation.
Fairly enjoyable except for the odd bitter flavor.

Reviewed by TheGrunt from Finland

Very dark brown color with a hint of red. Smell has chocolade and spring meadow in it. Medium or average carbonation, quite light foam after pouring from the bottle. Taste is fruity, but not sweet and very round overall. This is very easy dark winter ale, that has no negative features, but at the same time perhaps lacks a bit personality and punch? Still, a very good beer and four from me!