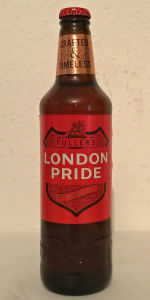 Notes: Not just the iconic ale of the capital, London Pride is an all-British affair that unites a nation of beer drinkers. It’s brewed with entirely home-grown hop varieties - Target for bittering and Northdown, Challenger and Goldings for aroma - but the soul of the beer is unquestionably in the malt.

Crystal malts combine with spring-harvested Pale Ale varieties Concerto and Propino, to give Pride its inimitable depth and balance.

This tawny-coloured premium ale borrows sweet raisin, biscuit and dried-fruit notes from the Crystal malt, while fresh, piney herbs emanate from the hops. Rich, smooth and elegant on the palate, it draws to a clean, satisfying finish with beautifully balanced bitterness.

Being American, I wasn't aware of this staple UK beer. Without thinking much of it, I picked up some bottles at the supermarket in Seoul Korea in 2009 where I was working at the time. Simply thought, well, as long as it isn't Korean beer and nearly the same price it'll make me pretty happy I'm sure. That night and that first sip really got my attention. Second sip and wow. What's this beer called? My new regular! This beer is not kidding around, nice, nice well balanced and won't break the budget too badly. The whole line of Fuller's brews are like that, or at least the ones available in Asia, India Pale Ale, ESB and London Porter. Solid masterful brewing at a good price. One of my favorite brewers. Not available in most shops in Thailand, so I will be ordering a case this evening from a beer delivery service, very worthwhile beer, especially London Pride.

T) Lighter than I was expecting, nice chewy malt flavour, very little hop notes but that is fine. No bittering aftertaste.

O) This doesn't try to do anything spectacular and that is its strength. A fine malty brew that you can drink down without thinking too hard.

Boy was I in for a surprise.

I cracked open the can, and the distinct smell of urine wafted very quickly up to my nostrils. I drank a small sip, it tasted like it smelled, and I kicked myself in the ass for wasting my money on this "premium ale".

Now I understand why the British refer to "getting drunk", as "getting pissed"!

The urine the beer ratio in the can is UNACCEPTIBREW!!

The British should stick to fish and chips, and leave the brewing for us North Americans!

Purchased at The Beer Store for just over $3.00 for a 500ml bottle. Served at 4deg C in a draught glass

A- Opens well and pours a decent white head that is gone in a minute. Very dark gold. Clear

T- Ok at best. Has a good malt backbone. That's about it for this one

O- Not so great. Alright at best. Will not buy again

A first note should be made that this beer is best enjoyed in its cask conditioned form pulled by hand from a beer engine in London where it is made and is freshest. The Fuller, Turner and Smith Brewery is located in Cheswick, London and London Pride is amongst the most poular Real Ales in the city.

In America it can be found in bottles and on draught, and although you won't find it cask conditioned here, freshness should still be made the upmost priority. Another note should be made that it should not be drunk or served at American near freezing temperatures, but rather in the mid 40F range (cellar temperature) of British ales, and should not be served in a chilled glass. When ordering here I will often order two, and let the second stand while I enjoy the first. The second will then be the perfect temperature. I keep this beer on draught in the cooler winter months and it is my favourite cold weather beer. When serving from the keg, I recommend tapping into and then serving from a pitcher; this tends to help the head become more creamy, somewhat simulating the cask pull in each pour. I have tried pulling it through the beer engine, but the extra forced carbonation of the export version is too much for the sparkler. I would enjoy the keg version of this beer more were there less carbonation.

In any regard, when well kept and properly served, I place London Pride at the very top of my favourite beers, and a benchmark for all British pale ale. It is delicately balanced, and a fine session beer. Whith its bright copper color, smooth lacy head, moderate alchohol and pleasantly balanced finish, London Pride pairs excellently with prime rib, steaks and other hearty beef meals, as well as with fish&chips.

A: [4.00] Copper to orange colored beer. The beer has very little head. What is there is white but dissipates immediately. The beer lists the ABV (4.7%) and a best by date of 01/15/2016. Hooray for Fullers for making all info easy to find.

T: [3.50] Follows the nose a bit. The bready malts are in the forefront. Maybe hints of a toffee sweetness in the middle.

M: [3.25] Extremely easy drinking. In the US I think we'd slap the label "session" on this somewhere. There is carbonation but it is a nice level. The body is decent for the ABV.

O: [3.50] This tastes like a much improved typical American lager. This would be very easy for someone that "only likes Budweiser". But I don't want to sell this beer short. It is quite tasty and has a nice flavor profile. I would definitely drink this again.

Pours a deep golden color. Very nice lacing, much more pronounced than the head. Aroma is of sweet malty and some bread. Tatse is sweet malts, balanced well with a touch of bitter hops. Might be a liitle too complex for me as a new rater to give a more detailed opinion. Overall, well balanced beer

Dark apple juice color; like apple juice with a disintegrated cinnamon stick. No head to speak of.

Alright! Nose is totally of melted plastic. Just what I like in a beer...not. A little caramel booziness, a waxed floor smell, and stale malts.

Feel is pretty watery and not much carbonation.

This beer provided a "tight" flavor-- hops commingled with a sprite of malt.
I want to use the term "dry" although the ABV is not particularly high.
The mouthfeel was a lively combination of bitter hops and effervescence to create a life on the finish.
Overall this beer is spot on its style with a satisfying combination of hops malt and flavor robustness.

not another 11.2 oz bottle . . . . and at 4.7% abv, i think i'm expecting a light beer.
pours with very little head, and what little there was relinquished itself to the orange-y, marmalade-y, ginger ale-looking liquid below it. some fizzy carbonation, but that dissipated also.
i'm sharing this bottle with a glass of Woodford Double Reserve bourbon and i believe i'm still getting a good sense of smell and taste from the glass. some malt in there with little hop and a little caramel. very light beer and, as someone else mentioned, would go great with a sandwich at lunchtime in a pub.
i did purchase this sixer specifically for the purpose of chasing the bourbon (it was a toss up between this and the guinness black lager- both very light abv) and i feel it accents the bourbon nicely. as a stand-alone brew, it stands by itself and on its own merit. a great tasting brew, although very light; but very nicely balanced and has definite purpose in life. cheers!

Lite to medium bodied with zesty carbonation, nice hop bite with some dryness and bitterness. Alcohol warmth is mild.

Glad I tried this. I would serve it to my coors & bud drinking friends to get them to explore and expand their palates. Good balance of malts, hops, carbonation, sweet notes, alcohol that they could handle.

Poured into a pint glass. Fruity, smooth, yeasty smell. Hops are dominant in the taste. Feels like an average English ale. I would recommend it to a friend.

very good colour, a nice copper. head is a dense off white but only about 3/4" thick. smell is clean with a very good smelling mild hops. at first taste i was a bit surprised the the hops did not stand out as much. a nice smooth malt flavour. it is very well balanced and very, very drinkable. a very good beer, that lots of different people could enjoy. this beer should be a world standard for good, drinkable beer.

D- Very moreish. The easy mouthfeel with a tasty backbone make this an excellent quaff.

Bottle is a 50 cl brown short-necked one. The label is black and red with a picture of a griffin on top.

A: Pours copper with a small light white head.

S: Smells of bitter hops, a lot of "English fruits", caramell and butter.

T: Dry and bitter from the hops. Fruity and caramell at the same time. Lots of butter.

D: A nice English Pale Ale, works great with salty/fat pub food as well as on it's own.

Had this on-tap at a local English pub. A pleasant amber-brown body with a 1fingered head. The smell is quite pleasing as you can pick up a good amount of caramel-y malt balanced by a hoppy whiff. The taste is superb as there is a good dose of hops to provide a really nice counter-balance to the strong malt backbone. Definately beats Bass (althogh I do enjoy Bass quite a lot) and others. An excellent beer and one which is definately worth getting a pint of!