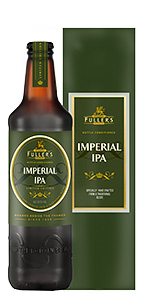 Notes: Made popular by the craft brewers of America, Imperial IPA is a revived style of beer that pushes the boundaries of well-hopped, high-strength ales. Imperial IPA's are traditionally brewed with a high proportion of crystal malt. Our unique take sees UK hop varieties Target, Goldings and Fuggles added to the copper at multiple points during the brew, delivering a piney, earthy aroma and a distinct edge of bitterness. For extra intrigue, we've also added a hint of black pepper - giving the beer a unique spicy twist.
Bottle conditioned to develop over time, this Imperial IPA will form a natural sediment in the bottle. Pour carefully to enjoy this special Fuller's beer at its best.
View: More Beers
Recent ratings and reviews. | Log in to view more ratings + sorting options.

500 mL bottle-in-a-carton from the LCBO; best before Dec 31 2028(!) and served barely chilled. I have my doubts that civilization will last that long, let alone this bottle of beer.

Pours a little hazy, with a garnet-bronze coloured body atop which is seated more than a finger of creamy, buff-tinged head. It dissipates within several minutes, reduced to a frothy collar while depositing a few rings of seafoam-patterned lacing in the process. An elegant-looking beer. The nose includes a tempting blend of earthy, leafy, piney hops, as well as bready, lightly toasted malts and toffee. A little herbaceous, with the alcohol being pretty easy to discern.

Quite flavourful and strong, but downright old school compared to the DIPAs that dominate shelves these days. I'm getting notes of bready, biscuity malts and caramelized sugars at the forefront, with a noticeable booze presence as well, Fortunately the warmth integrates decently with the back end of the flavour profile, which includes figgy dark fruits, toffee sweetness, as well as plenty of earthy, leafy, resiny hop bitterness that lasts on into a lightly warming aftertaste with hints of peppery spice, toffee, toasted malt and whisky. Full-bodied, with low carbonation levels that limply brush against the surface of the tongue, resulting in an oily-slick, smooth texture. Not a major issue, and somewhat forgivable at 10.5%, but the mouthfeel is my least favourite aspect.

Final Grade: 4.07, an A-. Fuller's Imperial IPA is not what I would call a modern take on the style, but the 'elegant yet reserved' English packaging kinda hints towards that. In the true spirit of old school DIPAs, the alcohol is a prominent facet of the flavour, as is the malt bill, making this a particularly robust and multi-faceted brew - it almost reminds me of an oaked beer, but as far as I know it underwent no such treatment. I wouldn't say I'm dying to have another, but let's just say that the second bottle in my cellar probably won't make it to the end of 2028.

500 ml bottle served cool into a tulip. LCBO purchase for $8.00 CDN. Review #1,800. Comes in a cool sleeve like the Vintage Ale and the Imperial Stout. Best before the end of 2028!? Have a not so surprising prediction that this will end up for like and English Barleywine than anything else. I'm presuming Fuller's brought this back for another year.

Appearance - Ruddy brown-red color, Aggressive pour yielded a finger of off-white / light tan head. Better staying power than I imagined given the ABV. Some sparse lacing clings to the edges of the glass.

Taste - Smooth flavors. Sort of a leafy and grainy combo transitioning to roasted malts, some wood and then suggestions of caramel and molasses at the close. Interetsing combo and quite delicious.

Mouthfeel - Full bodied, good expressive carbonation, drying finish and robust feelings on the tongue and in the mouth. Booze is well hidden, making on a brief appearance at the close and then of course as the heat rises in your throat after a few sips.

Overall - Hard to grade this, it says Imperial IPA, but being Fuller's this is distinctly English with the hop selection, this is the polar oppositre of your latest, juice-box of a DIPA with late series, double dry hopping hopping that is green as hell. Thinking of it more of a merging between and English Barleywine, and Old Ale with some American influences and with that it mind, this is a delicious brew meant to be savored and enjoyed. Well worth a tipple or two, if you can sparse the extra charge.

Brown bottle with best before 2027 date

A - Pours a deep dark brown mahogany colour thin head but stays the distance and laces.
S - Sweet malt and fruits and big
T - Love the fact that this is not a Hop Bomb but rather a balanced malty brew with a serious hop kick to boot. A classic English style IPA with the kick put into the malt rather than the hop.
M- Medium to full mouthfeel
O- A unique beer that really captures the history and imagination of days gone bye with a modern twist.

My favorite brewery from the UK, the best craft beer mastery of Europe, Fullers! Here they are with something they never did before!
They made beers in quite a variety but they never really indulged in the realm of IPAs. Now here they are with a limited edition Imperial IPA, kind of a "once in a lifetime" thing. Putting all the label notes aside, I sum this beer up like this: it is the peak of their craftmanship!
So far, taking many into consideration, perhaps their Golden Pride has been their flagship non plus ultra beer - but now they managed to take it further to a next level. They created an Imperial IPA from English hops in a way as if they made another Golden Pride: they made it, this is the English Pride!
I can't describe the flavors, ot is so deep and dank, no matter how overwhelmed I might be, this is still an outstanding beer. The time I spent drinkingbthis beer was 100% enjoy,ent from the beginning to the end, nothing against it, just the superlatives: an intense, thich, perfectly balanced and impressively hop-honey like experience!
And you know what? In the end I started thinking that it resembles the Golden Pride! It showed me that Fullers is not only a great brewery but they have a trademark flavor - which makes you happy whenever you feel it. And this is the mark of a truly great brewery. Congratulations for this Limited Edition, really special brew!

500ml bottle, in a nice green cardboard sleeve. Made with British hop varietals, and a 'hint of black pepper'. Best before 2028 - seriously?

This beer pours a clear, dark red-brick amber colour, with two fingers of puffy, loosely foamy, and bubbly tan head, which leaves a bit of random streaky lace around the glass as it slowly dissipates.

The carbonation is average in its palate-satisfying frothiness, the body a solid medium weight, and generally smooth, with a wee airy creaminess evolving as things warm up a tad out of the ol' basement fridge. It finishes on the sweet side, very robustly malty and frooty.

Overall - yeah, if you'd handed me a glass of this and inquired as to my opinion of it, I would have immediately said decent English Barleywine. There isn't anything really all that IPA-like about this offering, but it's still quite good - akin to an imperialized London Pride.

Fuller's is one of those breweries that produces some pretty forgettable beer, but you go back again and again because they have a few classics and are always hoping the next one is special. As far as the "boxed" beers go, the Vintage Ale and Imperial Stout are pretty darn good, so I was very curious about this new one in green.
First thing you notice is how it looks. It pours an absolutely beautiful deep dark mahogany red. With light coming through, it is really pretty. The nose, however, is super disappointing. There isn't any. At a whopping 10.5%, you'd expect either heavy sweet malt like a barleywine, or tons of hops. Nope. Just slight malt and slight hops peaking through. If you were blindfolded, you would never just what this beer is. The flavor is bigger for sure (how could it not be?). Much more of an English barleywine flavor, but you can tell there is a ton of bitterness holding back the 10.5% pile of sweet malts. Actually, very balanced and the ABV doesn't weight down the beer. Overall, a good beer that is unfortunately just missing a critical component.

The colour is brown, the liquid clear. The two finger high head is beige and compact; it sinks down to a thick lid leaving some lacing on the glass.

The smell is semi-sweet with distinct notes of caramel malt, prunes and dried flowers. Apricot jam, orange peels and shortbread. Spicy notes of bay leaves, black peppers and sandalwood. Alcohol in the background. It reminds in a way of Fuller’s London Pride, just much more of everything.

The taste is strong with hot spicy (somewhat unclean) alcohol, spices and pepper. Dried fruits and flowers, apricot jam and orange marmalade. Medium body. The aftertaste is dry and less hot and more balanced with caramel, mature cheeses, bay leaves and allspice, beef stock with a pinch of salt, some alcohol and clean bitterness. The long finish got notes of fruit cake, alcohol and banana peels.

The carbonation is medium strong, the long-lived bubbles are small and smooth. The liquid is a bit sticky.

An interesting DIPA with English hops and black peppers. And it works, the 10.5% is not as hot as I had expected.

I started this beer directly from the fridge - My bad! Don't do that. Luckily I had the beer for more the two hours so it got to the right temperature - roomtemp! The nose and the taste is so much better when the beer isn't cold.

Is this an Imperial IPA? I would have guessed an Barely Wine...

But anyway, I love caramel, sweetness and dried fruit in beers... so I LOVE this!