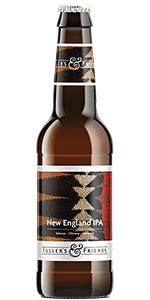 We've used oats, wheat and a mountain of hops - Chinook and Simcoe from the US and Olicana from the UK - to make a soft, juicy New England IPA. We've then bottle conditioned it, old-England style.

L- Medium/dark amber, with very slight haze. Pours with thin and fine white head that'll soon be lacing.
S- Leathery, woody, but neither seems that strong.
T- Woah, it has quite a prominent bitter front; of course, it's IPA. It's followed by a kind of blended flavour of various stone-fruits surry as cherry. That add clear personality, depth and interest.
F- It's 7.0% and that comes across loud and clear, I appreciate that as it fits with the quite bold flavour. Overall it's what I call a 'puddingy' beer, it reminds me of fruity British Xmas pudding, and the deeper, pungent and rich flavours therein.
O- I like this one waaaay more than the other 'Fuller's & Friends' bottles I just had and rated. If I could buy this again on it's own rather than in a multi-pack of 6 styles I would.
Bought as part of a 6-pack box of 'Fullers & Friends' beers that are a 2-brewery tie-ups. This one is Fullers & [?, no name is given, just a pictogram of a cloud over water]. Sold exclusively by Waitrose supermarket, whose initiative these tie-ups is BB: 31/12/19, my, over 2 years.

I love Fullers, they are the best brewery in the UK (and perhaps in the whole Europe). This time they collaborated with their "Friends" when making this New England IPA.
Now is this really a New England IPA? I mean, it's not hazy but rather clear, but is it supposed to be hazy anyway? The good thing about it is that it's rather piney and bitter and there is this certain rawness to it, perhaps that is what they call New England style. Quite simple at the same time, but very interestingly satisfying nevertheless.
My verdict: it is not such a classic like the rest of Fullers' repertory, but still good, nothing against it. Enjoy!

Bottled and bottle conditioned
pours a clear golden body with huge foaming white head that pretty much remains
You know the aroma is good when you get a good whiff pouring, grapefruit, citric acid and cahff
Some soapy but tart tropical fruit is backed up with a good body
I like

Pours a pale gold with a medium head that leaves decent lace. It is clear...which makes me wonder if they are even trying here. Nose confirms that this isn't a NE IPA, as it is not particularly hoppy and just a standard pale ale (maybe a touch below standard). A mix of US and English hops here. Taste is also a pretty standard pale ale. Not juicy, and not even that great. Not sure what happened here, but this is a disappointment considering Cloudwater was involved. About average for an English style pale ale, but a bit of a fail for a NE IPA.

From a 330ml bottle.
L: Pale gold with a brown tinge. Thick, long-lasting head (after 10 mins there’s still a 3mm creamy cap). The head is facilitated by the many, many streams of bubbles (surprisingly highly carbonated).
S: Fruity aroma. More dry & grassy than outright juicy tropical.
T: Combination of leafy & slightly stewed plus citrus and tropical fruit. On the high side of moderate bitterness.
F: Dry & bitter with ample hop oils. Long, drying finish.
O: Less juicy than I was expecting. An ok NEIPA but nothing special.

A 330ml bottle with a BB of Dec 2019. Purchased recently from Waitrose as part of a box set. A collaborative brew between Fullers and Cloudwater, one of six such collaborations. The label describes this one as a NEIPA brewed with wheat and oats and hopped with Chinook, Simcoe and Olicana.

A: Poured into a Duvel tulip. Bottle conditioned. A rich orange-amber hue with good carbonation and fine suspended sediment. Yields a large head of creamy white foam that lasts for a few minutes before reducing to a patchy surface layer. Some lacing. Very clear for a NEIPA.

M: Mouthfeel is smooth and tingly, with light carbonation and decent body. Could be a shade thicker given the strength. Subtle hop oil action on the palate. Aftertaste of bitter fruity hops, melon, ale yeast and caramel malt.

O: Pretty good but not outstanding. Looks OK, while the aroma and flavour are a mix of fruity hops, vague leafiness, ale yeast and subtle malt. Body is alright. Comes across as a tad muddled; the hop character isn't as incisive as one might expect for the style and it also seems to need a bit more time to mature. That said, it's drinkable enough. Worth sampling.

330ml bottle from Waitrose, part of their Fuller's and friends six pack. Brewed with cloudwater.

Aroma is more muted than I was expecting. Certainly lots of fruit salad though, and ripe fruit.

More going on with the taste though., Similar to aroma with a bit of malt coming through

Good body, certainly some slickness there from the oats I assume. Enough bitterness to counter any sweetness.

Overall a very good beer, but not enough aroma for an neipa for me at least and not really bitter enough taken as a west coast IPA.

Fuller's & Friends New England IPA from Fuller's
Beer rating: 85 out of 100 with 13 ratings