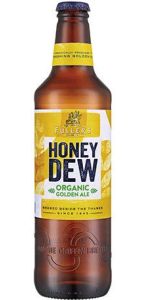 If you’re craving some refreshing drink during a bbq meal or a dinner, then this beer is right here for you. The body is very smooth and comes with a very delightful sweet, moreover, it still has a good beer taste, bravo!

L- Mid-gold, clear, pours with 5mm white head clearing swiftly.
S- Feint, thought I could briefly smell honey. ... Oh gawd, I'm such a plank, but in mitigation I do not read any lable's taste description before trying a beer! I thought the name Honey Dew and yellow lable, referred to yellow Honeydew melons; it doesn't, it's BREWED with honey.
T- Well, the honey flavour is pretty prominent, in fact it dominates the flavour here. I can taste hops into the dry finish but can't find much other flavour in between the two.
F- Given how pronounced the honey is the beer it isn't notably sweet, though my mouth keeps thinking it should be. But to me it feels like the main central body of feel is not very clear here, it's honey and then into some modestly dry hops.
O- Certainly different, interesting to try, it would help if you're a serious honey fan. I reckon this is going to be something of a 'love it or hate it' brew.
BB: 01/04/2020 500ml bottle. ps. I rate vs a mid-point score of 2.5 which = neutral on an aspect. Any negatives rate versus that mid-point and v-v.

i thought this was really good on tap, way underrated here, and a real cool way to showcase this tasty honey. i didnt know these guys did anything like this, quite modern and mass appeal, with all organic ingredients, pretty awesome. pale brassy color, quite clear, and with a lasting white head on it. aroma is gorgeous, sweet floral honey in its purest form, seems not real sugary, but the honey is crazy forward and natural, really well done there. a simple clean english malt base along with it and a mostly irrelevant ale yeast. the flavor is honey driven, natural as can be, nicely supported by the malt. this is light not not overly so, medium bodied, a soft toasted note to the malt, quite complex really, and the honey comes out more and more as it warms. it has a little texture from the honey too which is cool, makes you know its real, and its very springy and drinkable. this was excellent on a hangover, a somewhat delicate flavor thats balanced in a really cool way. i love how forward the honey is, i could have had a handful of these pretty easily. neat that its organic, and a fun something different here from fullers. recommended.

Bit of a twist to the standard golden. Honey provides a nice earthiness to the aroma and flavor. Tight white head and ample carbonation also notable.

Rating from notes, 2013: Bottle my wife brought back from England. Pours out a nice golden color with some orange hues. Foamy head fades quickly.Malty aroma with a hint of sweetness. Taste brings more malt flavors, honey, lightweight. A bit under par for Fuller's, though.

From Elcervecero. In Ikea's pint glass. Playing Sentience The Android's Tale. Ultradrinkable, with a soft and pleasant honey touch. It superb feel invites to long and continuos sips. Plenty refreshing too. Little foam though

Poured from a 500ml bottle.

This is a glossy, rich yellow beer with moderate carbonation and a short-lived, foaming head that persists as a cap. Smells of supermarket honey. Light honey is the dominant flavour and the zesty edge promised by the label is largely absent (and very much missed). The mouthfeel is rich verging on cloying.

Fuller's can be a bit hit-and-miss and this, I'm afraid, is a near miss. For a golden ale, it's not crisp and not particularly refreshing. Too much honey. There are much better English golden ales available.

Had to review this beer again, almost after a year. The first time I had it wasn't bad at all so I was compelled to give it one more try. Now I can recognize its "Fullerisms" I think - trademark English hops are there that make it very typically Fuller - and it is something I do like about this beer. Though it is much lighter in body than the London Pride, let alone the others, it is satisfactory. But the honey, npt sure where to find it, perhaps in its smoothness! It also has a subtle rich sweet tinge to it but just a tiny bit. I guess that on the other hand it's the honey that leaves a bit filmy overtaste in the mouth...
I rated this beer up the second time, it is all good for what it is, a light, refreshing and interesting beer, an easy drink. Fullers just can't go wrong!

Fuller's Honey Dew Organic Golden Ale is classified by CAMRA as a Golden Ale, not an IPA. Golden Ales, as a style, appear to be an attempt by British brewers to produce an ale that is as close as possible to the bottled pilsner lagers - Beck's, etc. - that became popular style accessories among the young in British pubs from the 1980s. The style prototypes are given by CAMRA as Exmoor Gold and Hop Back Summer Lightning.

This beer is thus misclassified here as an IPA. Judging purely by description, its nearest US equivalent might be an American Blonde Ale.

Pours with a meagre quarter-inch white head that disappears almost as soon as the pint glass is full. A clear honey yellow in the glass with little visible carbonation. Scent is thin and difficult to characterise - similar to many lagers. No obvious hop, honey or citrus character.

Taste follows the scent - distinguished by very little. Clean on the palate, with a faint aftertaste of honey. One could drink many a pint of this very quickly, or a single bottle as an accompaniment to food, but as a drinking experience per se it is null and void. This is a beer designed for those who prefer an ale with little beer character - i.e., the young, and others who have been raised on cheap lagers, whose lack of character is partly disguised by cold serving. Significantly, this ale is stated to be best served chilled.

Overall: this is a thirst-quencher for a hot day, and fine for that purpose. The organic ingredients allow the drinker to bathe in righteous self-satisfaction. Otherwise, an undistinguished and utilitarian ale alternative to undistinguished and utilitarian lagers. Reasonably priced if purchased in multiples. Not worth seeking out, but inoffensive and palatable if encountered.