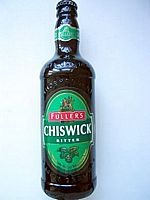 On tap at The House of Brews. Served in a pint glass. Clear amber. Smells lightly fruity and bready. Tastes very similar, but with a strong fruity character. Bready and bitter finish. Sharp bitterness. Light body. Medium carbonation. Disappointed by this. Just not an enjoyable bitter.

Extremely good beer, I really liked it. Now is one of my favourites, luckily they are wide available in Mexico since the biggest craft brewery imports this.

Had this on cask at the brewery. Balanced hops and malt. This would be one of my go to session beers if it was available in the states.

On draft at The Sharp Edge Creekside, Crafton, PA.
Very faint aroma of malt
Head probably removed by bartender; what remained was white, creamy, and rapidly diminished to 2 mm partial layer
Lacing on the first one was poor, with a few small islands. The second one had good lacing with multiple narrow rings of small bubbles. A cleaner glass?
Body was medium yellow, clear.
Flavor began initially slightly malty and bitter and ended the same. No alcohol was tasted in either beer, but the second had a slight diacetyl taste at the end.
Palate was medium, watery, and had lively carbonation

A passable Brit bitter after you take into account the time it spent getting here. I’ve had it in the UK and liked it more (maybe the pub ambiance vs the sports bar vibe at Sharp Edge). Fullers doesn’t make the best brews, but they’re still OK.