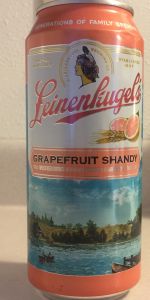 Appearance: Pours a bright yellow color with a finger of a fizzy white head that settles to a ring. Body is very hazy but translucent.

Smell: Grapefruit juice, and while that's pretty much it, it's a nice natural grapefruit rather than artificial.

Taste: Light tartness, grapefruit (though weaker than the nose), grain, hint of wheat, mild sweetness in the finish

Overall: Not good, but not terrible either. Kind of reminiscent of a watered down sweetened grapefruit soda. It's refreshing enough and works for what it is.

It looks like someone, somewhere was listening to me! My local, in-person trader, tone77, and I split the cost of a mixed 12-pack & he was gracious enough to pick it up & give me first choice of which six. The following review is in support of The CANQuest (tm), endorsed by lovers of fermented beverages in aluminum cylinders everywhere. Today is H, 21 April 2016.

From the CAN: "The Pride of Chippewa Falls, Wis[CAN]sin Since 1867"; "A Shandy-style Beer with the Flavor of Fresh-Cut Citrus"; "A traditional shandy is beer mixed with a little something extra, like lemonade, soda or ginger ale. Leinenkugel's (R) Grapefruit Shandy is our take on this tradition. Each batch begins with traditional wheat beer. We then combine it with natural white grapefruit flavor that adds a note of fresh-cut citrus to brighten a great day by the lake."

A Loud Crack! was immediately followed by an inverted Glug. This caused to production of three fingers of dense, rocky, bone-white head that slowly fell, leaving some lacing in its wake. Color was a cloudy Straw-Yellow (SRM = > 2, < 4). Nose left no doubt that this involved grapefruit! It was a tad on the sweet side, like Ocean Spray Red Grapefruit Cocktail, but still, it was very tart with an unmistakable grapefruit smell. Mouthfeel was thin-to-medium, but about the standard for a shandy. The taste was more muted than the nose had led me to expect, but it was still strong with grapefruit. It had a light sugary sweetness, but overall, it was tart, citrusy and unmistakably grapefruit-driven. Finish was dry, refreshing and probably the best of the Leinenkugel line of Shandys that I have tasted up to this point. I like the CANcept, I enjoy the presentation (CANs) & I think that the mixed-12 packs are actually a good deal at their price point.

I picked this up at Country Garden 6-Pack and held it for a Leinie's Friday, which happens to be today!

From the bottle: "The Pride of Chippewa Falls, Wisconsin Since 1867."

I unscrewed the cap and let fly with an aggro pour, creating three fingers of fluffy, bone-white head that started to fizz like pop and then suddenly slowed down and created a meringue-like head atop the beer. Color was a cloudy Pale-Straw (SRM = 1 - 2). Nose smelled like freshly-squeezed grapefruit juice! Mouthfeel was fizzy, kind of creamy, very full on the tongue. The taste was definitely grapefruit, but not as strong as what I had expected from the nose. It seemed to lack the definitive tartness that I enjoy in grapefruit, but it was being offset by the beer and honey with which it was made. Finish was semi-dry and highly refreshing, which is what they were going for in a shandy. Now, they just need to put it in CANs!

A: Pours a cloudy pale yellow in color with moderate to heavy amounts of active visible carbonation along the edges of the glass and faint pale golden yellow highlights. The beer has a three finger tall dense foamy pillowy white head that slowly reduces to a very thick film covering the entire surface of the beer and a thick ring at the edges of the glass. Moderate to significant amounts of lacing are observed.

S: Moderate to strong aromas of citrus/white grapefruit juice over the top of a light aroma of wheat malts.

T: Upfront there is a light to moderate flavor of wheat malts with a hint of grainy sweetness. That is followed by moderate to strong flavors of slightly sweetened white grapefruit juice which continues on through the finish.

O: Easy to drink and very refreshing with no hints of alcohol present at all. A very good beer for a hot summer afternoon out in the yard. Would grab it again but personally I think it is not quite as good as the Stiegl Radler.

This was better then I expected. I hear so many beer geeks complain about the "wine cooler" like Shandy but as I get older I find myself moving away from the 'beer with a bite" IPA & leaning towards the mellower Shandy or classic Belgium. Great summer time or BBQ beer with high grapefruit flavor. My only draw back is that the color is very hazy but that's understandable. I liked this better then the sweeter Orange Shandy.

It pours a murky yellow with almost no head. The smell is bombastically grapefruit. The taste is powerful grapefruit as well, and the shandy is easy-drinking, sitting easy.

I'm not going to dig too deep into this one, it's a fairly simple beer. All you need to know is that this is light, refreshing, and somewhat sweet, the perfect beer for a bonfire and some grilled meats (or veggies, vegetarians and vegans are people too). Don't overthink this, it's an excellent thirst quencher on hot days.

Huge grapefruit nose and taste up front, kind of fizzles after that. Probably nothing I would enjoy again, plenty of other great summer beers I would have first on a hot day.

Quite opaque (more clarity at weiss glass’ tapering stem) blonde, straw, almost banana color. The occasional unbroken clump of particles in suspension. White fluffy head of good retention. Unsurprisingly, but most welcome, strong grapefruit aromas, from the fruit to the rind. Grapefruit to the taste as well, strongest but still incredibly subdued (and not anywhere near as tart as it should be) by honey sweetness, as well as somewhat harsh wheat and yeast character, which would be fine if there was a little banana to balance those out. In short, the “honey weiss” part of this beer conflicts with the fruit aspect. I think they overcompensated with the honey because most people aren’t overly fond of grapefruit in the raw. Still good, of course, especially chilled on a hot day. Don’t forget the almost metallic rindiness in the back. Again, good, but no substitute for overt grapefruit sourness. Medium-bodied, thicker than the Summer Shandy, sloshy, with decent amount of fine, tingly, then creamy bubbles. This should, by all rights be better than the Orange Shandy, but it’s not even as good. Don’t let my complaints fool you, still a good Leinie offering.

Bottle at wedding event. Hot day, good quencher. Lots of grapefruit flavor, however, there didn't seem to be too much of a beer backing it up. For what it was, a summer beer, it was on, but nothing I'd order again.

I went into this expecting a pretty bitter beer in line with a grapefruit IPA or something like that. Nope, it really is a shandy, just made with grapefruit juice. That sounds bad, but it's really, really good on a hot day.