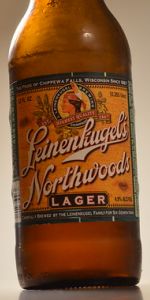 Originally introduced in 1986, Northwoods Amber quickly became a fan favorite in coolers across the country. In fact, Northwoods Amber has won a gold medal in 1993 at the Great American Beer Festival® in the Premium Lager category. It’s made with some of the finest quality ingredients, including some hops, barley, oats and water from right here in Wisconsin.

I was expecting a lot more flavor from this, so although it wasn’t necessarily a bad beer, i was just disappointed. Was too sweet for me but I enjoyed the carbonation.

This is a 12oz. bottle poured into a pint glass. There is one finger of white foam over a nice clear yellow, slightly orange body of beer. Plenty of carbonation to watch. The foam settled to an eighth inch cap with no lacing left behind.
The aroma is sweet bread malts, very noticeable.
The flavor follows the nose, sweet malt, not bitter, but it does have a nice simple crisp finish. This is a lager beer, sweet, but not overly sweet, just a slight hop presence. This one is easy to drink , just a good solid beer!

Poured from a bottle into a pint glass. Pours orange yellow with a tiny white head. Smells of sweet grain, fuller than most lagers but not that interesting. Tastes of adjunct grain, kinda sweet, and slight fruity notes. Beer is light bodied and easy drinking, good carbonation. Overall, an above average beer.

Wow not great. Got it in a variety pack and it has been a huge let down. Kind of reminds me of a natural light but a little bit better. Would not recommend.

Northwoods Lager pours a copper color, with a small, but long lasting, frothy and slightly lacing head. Sweet and crisp aroma, hints of wheat. Flavor light, slightly sweet, crisp, nice creamy wheat and harvest like flavors. Good body and feel. Overall, this is really good, nice flavors, not too much, can drink with a full bodied

Aroma: Aromas of sweet lemon citrus and honey. A little grass and corn. (3.75)

Flavor: Flavor follows the nose a with more sweet honey drizzled lemon with some light, grassy, corn notes underneath. Good malt flavors and not too much adjunct. Finishes a little sweet. A little sour lemon which is weird. (3.75)

Feel: Heavier-bodied. Light on the carbonation. Drinks a little syrupy, but still smooth. (3.50)

Overall: A pretty average lager. It's slightly sweeter and heavier that I expected. Strong on the honey. I could do without it. I would easily confuse this for a lighter blonde ale. Still it's crisp and smooth like a lager should be. A little too much corn adjuncts too. Pretty average, but a little to sweet for me as with some other Leinenkugel beers I've had. (Final Rating: 3.69)

Clear golden with lots of visible carbonation and a soapy white two fingers of head. The head crackles down to become one with the beer.

Taste is just like the smell! Kind of sweet with a bit of floral and pine on the tongue. Still has strong cear clean tasting lager notes. It really does not taste of any adjunct so I suspect the taste of sweet to be hop influenced.

Mouth feel is nice bright and and pretty light with a clean finish. There is just a hint of sweetness that lingers briefly in the background.

A very good beer to describe the " Northwoods" portion of this lager. If it was canned this would be a nice beer to pack in when one is going camping. The taste is really quite refreshing and just has some real good strong beer legs for want of a better description.

Strong look to this beer. Pretty clear deep gold/amber, with a thin-ish (but not short) eggshell white head. The smell is very one-note and malty in its sweetness. Taste is similarly underwhelming, if not subpar. There is a bit of subtle hoppiness to balance out the malt bill, but it's almost exactly what you'd expect in a lager. Mouthfeel pretty average; drinkable in this regard. Overall, not bad, but no more than ok, either.

Wonderful reddish cedar brown, clear, with a short foamy head. Smells like brown Hamm's. Also, somehow, tastes like brown Hamm's. Solidly drinkable, but a little heavy on the sweet and corn flavors. It's actually quite bad. Watery with weak flavor, no balance. Drink Hamm's and put in some red food coloring.

Northwoods Lager brewed by Jacob Leinenkugel Brewing Company, with an ABV of 4.90% This American Lager pours out of 12oz glass bottle into a pint beer glass. The color of this brew is a deep amber color almost copper with a small white head. There is some thin spotty lacing to this brew, it sticks to the side of the glass well. The smell is rich with sweetness, mixed with grains and malts. You pick up on some faint hops in the smell of this brew. So far this is a nice inviting brew. Now for the taste, it is Bold with flavors. You first pick up on the grain an malts flavors. The mild sweetness is a nice touch to this brew. The body of Northwoods Lager is a solid medium. There is nothing overpowering about this brew, it has a super nice balance to it. This brew would go nice with dinner. The mouth feel is Bold, Rich, Sweet, Clean, Smooth and Refreshing. Overall I am going to give Northwoods Lager a solid 4 out of 5. I would definitely look this brew up again giving the opportunity to. Jacob Leinenkugel Brewing Company, did a real nice job with this brew.

If there ever was a perfect lager that is available year round this is it. Leinenkugels may get lost in their shandy mixes but this beer legitimizes the brewery for sure!

Darker in appearance that most AALs. It is also has a maltier and fuller taste. I was glad to see they undecided this one for a while. I find it a good change of pace.

Got a bit of a bite to it. I found myself slurping it down right quick, though I was thirsty. I wonder if the bitterness is too much. Interesting aftertaste. 2017/11/05

Pours a medium copper. Decent malt flavor about slightly below average for the style for me.This one seemed sweet and piney as well. This also had some fruity aromas in the backbone.

Poured from a 12 OZ bottle into a pint glass. The appearance is a dark anber color with a medium sized white head. The aroma is b ready malt. The taste matches the nose.

Pours a brilliant golden in color, topped with an off-white head. Though it's not quite an amber lager, it's darker than a good many American Adjunct Lagers. Some a higher percentage of malt, or an all-malt beer?

That's a good question, and as memory serves it's among the few all-malt beers from heritage, regional breweries of its era, being originally known as "Leinenkugels Limited."

At any rate, it's got a predictably malty-sweet nose -- very neutral, with just a twinge of lemon rind-like hop character.

Sweet and fully-flavored on the first sip, but not with too much depth by comparison to some other all-malt lager styles. The malt flavor is in a sense "one-dimensional", but the hop character is likewise rather light in both bittering and aromatic aspects. That's not to say it doesn't do much for the overall flavor profile -- because it does. But by comparison to today's hope experimentation and variety, a recipe from the 1980s (or earlier) such as this one isn't very likely to excite contemporary drinkers. In one sense we've come quite a long ways, and yet, as it is, this recipe holds up well.

Very good mouthfeel, and at 4.9% there's a very good drinkability, too. Northwoods Lager is always worth trying whenever the powers that be at the brewery decide to unleash it on the unwary, Shandy-drinking public. ; )

Poured from a brown 12 oz. bottle. Has a dark golden color with a 1 inch head. Smell is of malts, light sweetness. Taste is lots of grains, malts, light hops, just a touch of lemons. Feels medium bodied in the mouth and overall is a refreshing and decent beer.

A - 3 fingers white foam over a body of golden amber; high visible carbonation

S - grain with a touch of sweetness

O - nothing pretentious here, just a good simple lager; refreshing at the end of a long day

Pours a clear amber color. 1/2 inch head of an off-white color. Good retention and good lacing. Smells of slight sweet malt, pale malt, corn, and a hint of citrus hops. Fits the style of an American Pale Lager. Mouth feel is smooth and crisp, with an average carbonation level. Tastes of slight sweet malt, pale malt, hint of corn, slight caramel malt, and a hint of yeast. Overall, good appearance, but lacking in all other aspects.

It does have a handsome looking amber-golden pour with a quick lasting white foamy head and very nice clarity.

Loads of melted caramel sweetness and malts on the nose. The hop profile is lower

The body is light to medium. It is also quite smooth.

Northwoods Lager has a thick, off-white head, a clear, bubbly, golden appearance, and some glass lacing. Aroma is of sharp, bread crust-like barley malt, and the flavor is of corn-mellowed barley, some hop bitterness, and a touch of white bread. Mouthfeel is light to medium, and Northwoods Lager finishes crisp and refreshing. RJT

Feel: a little on the lighter side, a little filmy, but still refreshing

These were pretty much ubiquitous during my time in Wisconsin. Can see the 6 packs sitting in the cooler at Koppa's right now. . .

Pours a pretty amber color, decent clarity, small 1/4" off white head. Aroma has a little bit of a honey malt thing going on, almost Vienna like. Definitely has that marzen/oktoberfest kind of fall season type of vibe. Mild hopping, relatively smooth, only a slight bitterness to it. Mild caramel notes in the mouth feel, with the caramel and honey references, I don't want you to think this is a high sugar sweet beer. Its very mild. Its a mild fall ball kind of beer. Carbonation is up there and lively. Given the substantial amounts of Germanic people s in Wisconsin, its not surprising that they would kick this Oktoberfest lite version kind of beer.

Its a pretty color.

Well, once more, I was let down by a screwed-up screw-off cap! Screw it! I am giving it a heavy-handed pour in response. This actually worked out rather well as it puffed up with three-plus fingers of dense, foamy, rocky, bone-white head with decent retention, leaving nice lacing in its wake. Color was a gorgeous solid Amber (SRM = > 7, < 9) with NE-quality clarity. Nose had a clean, slightly-sweet honey-like breadiness, all of which are the hallmarks of a good lager. The early days of The CANQuest (tm) saw me drinking a LOT of AALs, so it is nice to have one that is not laden with nonsense. Mouthfeel was medium. The taste was very honey-like, but more biscuity than bready. Honey-drizzled biscuits! Mmm. Finish was semi-dry & very refreshing. Why is this only for a limited time?!? CAN they put it in CANs before it goes away?!? Now, I feel sad.

Northwoods Amber from Jacob Leinenkugel Brewing Company
Beer rating: 77 out of 100 with 150 ratings