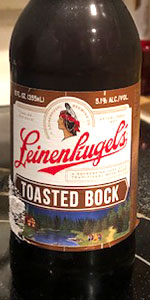 Notes: Leinenkugel’s Toasted Bock is our refreshing take on a traditional bock beer – a style that originated in southern Germany in the early seventeenth century. We combine German and American ingredients to create a light, smooth and slightly toasty version of a bock beer. We hope you love it as much as we do! - The Leinenkugel Family

Reviewed by Papercut4 from Wisconsin

Notes via stream of consciousness: It's poured a clear dark chestnut brown body with orange highlights that resemble glowing embers at the base of the glass. The head is a two finger thick cap of big-bubbled tan foam. In the nose I'm getting what seems like toasted adjunct malt with a delicate background of lightly floral hops. The flavor follows suit. The malt has a toasty character to it, and a touch of caramel, but overall it seems thin. I could be wrong but it doesn't seem like an all-malt beer, and if it is, then somethings wrong as it's lacking depth and richness. A bock of any sort should have a firm grainy malt as its base and this does not. How strong is this? Ahhh, there's part of the answer, this is only 5.1% ABV. This is not really a bock beer. It reminds me of the beers that breweries in the U.S. used to put out in winter/spring under the title "Bock" but which were just their regular beers with a product called Porterine added to give them some caramel flavor and color. I wonder if Porterine is even made anymore? I know Yuengling used to use it in their Porter based on an interview done for Mid-Atlantic Brewing News back in 2014 so maybe it is. Anyway, the malt here is thin and anything but complex, and the bitterness seems a little high even at 21 IBUs as it leaves a lingering bitterness at the back of my throat. Sometimes that's a good thing, but that's not the case here. The body is medium-light and the carbonation is soft. The head held up about average and it has left some lacing about the glass but it's not any better than a standard, average beer. Even if I put aside the fact that this is labeled as a bock and doesn't even come close and just judge it hedonistically it doesn't get very far. Disappointing.
Review #8,429

3.71/5  rDev +1.6%
look: 3.25 | smell: 4 | taste: 3.5 | feel: 4 | overall: 3.75
Poured from a can into a pint glass
Appearance – The beer pours a dark reddish-brown color with a small head of off-white foam. The head fades rather fast leaving a touch of lace on the sides of the glass.
Smell – The aroma is big of a roasted and toasted malt smell mixed with some caramel and brown sugar as well as a nice nutty aroma. Other aromas of chocolate and coco nibs are there as well, creating a rather sweet roasty smell.
Taste – The taste starts out brown bread malt taste with notes of nuttiness and some light earthy hop. There is a moderate sweetness of molasses and brown sugar as well as a touch of raisin. As the taste advances the sweetness remains rather constant while the roastiness and the nuttiness get more potent. A little bit of graininess and some light woody flavors come at the finish leaving one with moderately roasty and toasty nut bread like taste to linger on the tongue.
Mouthfeel – The body of the brew is medium in thickness and creaminess with a carbonation level that is rather average. Overall, the moderate nature is a nice balance for easy drinking and roasty flavors and does a nice job overall.
Overall – A quite easy drinking bock with a nice flavor and more sessionable abv. Good for a cool fall day.

3.62/5  rDev -0.8%
look: 4.5 | smell: 3.75 | taste: 3.5 | feel: 3.5 | overall: 3.5
12oz can stamped FEB2723 poured into a becher glass at fridge temp 5.1% ABV. The beer pours mostly bright dark amber with chestnut highlights and light brown head. The head recedes to a thin cap and leaves spots of lacing. The aroma is bready and toasty. The taste is semisweet toasted malt with a hint of earthy nutty bitterness. The mouthfeel is medium bodied with average carbonation and a semi dry finish. I get diacetyl here, but I could be wrong. Weird bitterness plus microwave popcorn butter...
Overall, ok.
Dec 05, 2022

Reviewed by speters from Illinois

I'm seriously considering this with my Thanksgiving meal as it won't interfere with the food but also won't get weird and yeasty with food..

Rated by JuanPn from Louisiana

Reviewed by Olesjm from Kansas

The Leinie's aroma is weak, almost non-existent. If I annoy the Lienies with a swizzle stick and linger, I can pick up the somewhat sweet toasted malts. Some caramel perhaps.

The flavor is quite enjoyable, but light. Mild bread. Toasted malts. Light sweetness, light caramel. Slight bitterness in the middle through to the finish. Slightly bitter toasted malts characterize the back end and the aftertaste. These flavors linger in my mouth resulting in an enjoyable, refreshing late winter seasonal beer.

I have rated the Leinie's as a Traditional Bock. If you are looking for an easy-drinking refreshing malty late winter lager, I do recommend it (and would rate it higher on that scale). If you're looking for a traditional German-style Bock, move along.

Pours a clear deep garnet topped by a finger of sandstone foam. The nose comprises caramel, walnuts, raisin, and light candied orange peel. The taste brings in more of the same, everything both sweeter and dustier than before. The body is a light medium, with a light moderate carbonation and a wet feel. A decent bock, nothing special, but a nice hit of the goat when you need one (say, whilst fleshing out a Mariano's mixed sixer).

Reviewed by jkrich from Florida

Inviting aromas of sweet malt predominate with a hint of molasses.

This is a quaffable and rather light interpretation of the classic bock-style. Slightly thin-bodied for the style, it does have pleasant flavors of chewy malt, molasses, and faint hops that keep it from becoming cloying. As with most LeinenKugel beers, there is nothing outstanding about it, just a workmanlike effort. Sad, that this brewery's offerings are disappearing from the shelves here in northern Florida.

Rated by TerryMills from Tennessee

Reviewed by CBlack85 from South Carolina

the aroma is sweet and caramelly with very little toast evident. There is a mild fruitiness and a nice breadyness that unfolds as the beer warms.

like the aroma the flavor is sweet and caramelly, with a light nuttiness. Unlike the aroma there is a nice understated toasty component. Very clean and pleasant, but not terribly interesting. Light bodied and moderately carbonated.

Overall, it is a good beer, but is lacking something. Just a little light for a bock

Reviewed by AudioFileZ from Alabama

4.5/5  rDev +23.3%
look: 4.5 | smell: 4.5 | taste: 4.5 | feel: 4.5 | overall: 4.5
I don't have time for flowery prose etc... what I do need to say is that this is one hell of a brew. The kind that has enough "toasted darkness" to have some cojhones but is kissed with the right amount of hops so it isn't syrupy sweet. In other words a brew I can pull a session on yet feel I got a full-flavored brew in the bargain. Actually on par or slightly better than Anchor Steam which was pretty much my bar for a beer that was flavorful yet highly drinkable. This one is a keeper. Hope it makes the cut for year-round production.
Jan 06, 2022

3.77/5  rDev +3.3%
look: 3.75 | smell: 3.5 | taste: 4 | feel: 3.5 | overall: 3.75
I got a 6pck of bottles of this beer from my local meijer store. It poured a clear dark mahogany amber with thin ecru head that is not leaving much lace. The scent had faint maple and malt notes. The taste was nicely balanced and easy to drink with subtle maple sweet malt and toasted grain highlights. The mouthfeel was lighter in body with good carbonation. Overall it is a good beer.
Jan 06, 2022

Reviewed by ZebulonXZogg from Illinois