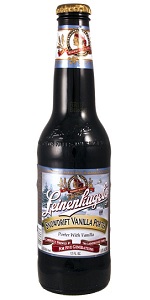 Notes: Drift into winter with Snowdrift Vanilla Porter, back by popular demand as our Winter standalone. A fuller-bodied brew with hints of cocoa, coffee and caramel brought out by roasted malts and aged on real vanilla, our Leinenkugel’s Snowdrift Vanilla Porter is smooth and creamy, making it perfect for warming up winter.
View: Beers | Place Reviews
Reviews: 314 | Ratings: 1,973 | Log in to view all ratings and sort

This is a seasonal beer and hard to find West of the Mississippi but it’s worth getting your hands on some. It’s my favorite Porter I’ve had thus far. I typically don’t like anything that Leinenkugel comes out with, but this is great. It smells like vanilla, chocolate. It is smooth and not thick. It has a creamy vanilla taste. On a side note, it makes my stomach cramp unlike any other beer. Not sure why.

I bought the winter sample pack and to my surprise this was in it. The darkest smoothest beer I have ever had. Even the head was brown. Very smooth with no after taste.

D - Not very good. Not very good at all. This one is a big disappointment. I purchased this one because of my fond memories of Sunset Wheat. I won't be purchasing this one again.

I've always liked Leinenkugel's offerings, for the most part. Seeing that snowdrifts are imminent, I decided to give a 6-pack of this a try. A nice maple syrup color in the glass, and hints of vanilla on the nose had me eager for tasting. The vanilla came and went, and sometimes leaned the brew toward root beer, but a good porter bitterness steered it back on course. There was more vanilla in the taste than in the smell, so the opposite of vanilla extract. It felt smooth going down, and was better cold than at room temperature (where the bitterness began to dominate). I don't regret buying a 6, and may again when I know I'll be able to watch snowdrifts accumulate without having to worry about getting anywhere.

It’s not only wine that is bought for the label. I bought one in a mix and match pack because I liked the name. It sounds like it must be good. Unfortunately, not so much and I was disappointed. I’m not sure how to describe it, but not really like a typical porter. The flavor lacked depth and the feel was kind of thin.

As a Leine product I was expecting a strong artificial vanilla taste. Instead it was very subtle and not very distinctive. The label says a robust porter aged on real vanilla. That’s not a very accurate representation but it’s a good basic porter. Tastes of chocolate, carmel, and roasted biscuit with a slight vanilla taste. Overall, a good beer but not one worth troubling yourself to seek out. I think there are many better options at the same price point.

Drinking this at home.
Poured from a bottle into a pint glass.
Appears dark brown with a nice foamy head that dropped quickly to zero and a little tan lacing.
Smells malty sweet and vanilla.
Taste follows the nose nicely with some chocolate and spices and alcohol despite the 6.0 ABV
Mouth feel is thin for a porter.
Overall an okay porter.

There is yellow ink on the neck of the bottle but it is smudged and it doesn't appear to clearly indicate a date. The bottom of the bottle indicates "2780A22139"

Appearance: The head is short and fizzy with mostly large bubbles like the top of a glass of coke. It fades out very quickly. Zero head retention or lacing. The body of the beer is a dark mahogany brown and red with good clarity.

Aroma: There is a light aroma of malt syrup and a hint of char.

Taste: It has a flavor of toffee with a Malta Goya note. After a while a bit of alcohol comes through.

Overall: The label states that this is a "ROBUST PORTER AGED ON REAL VANILLA." It doesn't taste like vanilla at all, and it is very weak for a Robust Porter. It's a very weak-bodied beer without a lot of flavor or aroma. I don't recommend it and I wouldn't drink it again.

A 12 oz. bottle poured into a clear pint glass reveals a liquid that looks a little like carbonated black coffee. There was a bit of a light tan head, for a minute or two. Absolutely no glass lace and very little roasted malt aroma. There is just a hint of vanilla above the glass. There is some roasted malt flavor and a subtle vanilla inclusion. Nice taste, for what is there, but it's too shallow to be considered great. A thin porter is rarely a good porter and Snowdrift isn't. Certainly not bad, but not one to look for, neither.

Not a bad porter. I am a huge fan of the Leinenkugel Summer Shandy so I decided to give this one a go to check out other beers from them. I was not disappointed, but not WOWed. It has classic dark color like a typical porter with a nice brown foamy heady. It tastes like a chocolate bar with a vanilla twist which is nice. However, it does not go down as smooth as I would expect. Overall, I am satisfied, but not completely impressed. A solid beer.

From a 12oz bottle. Pours a dark caramel color with a half inch of brown head. Roasted malt and vanilla smell. Full body. Faint roastiness with cola-like sweetness. Not bad.

Tastes of coffee, vanilla, roast malts. A bit of sweetness.

More like a brown ale than a porter. Not a whole lot of vanilla taste. An ok beer none the less.

Flavor: Much stronger with the Vanilla upfront. Followed by some milk chocolate and cream. A strong vanilla cherry cola flavor in the middle predominates. A chocolate and vanilla cream sweetness on the backend with a lingering vanilla flavor.. (3.25)

Overall: Not the best beer. The negatives are the simplicity and lack of complex aromas. The aromas and malts are nonspecific and not very flavorful. Also it is undercarbonated, watery, and flat. Not what you want in a beer. The positives are first the appearance. And Two, the vanilla is pleasant, appropriately dosed and not too strong. Not one to seek out as you may have expected. It's not unlike a vanilla cherry coke. More cherry cola as the beer sits. (Final Rating: 3.34)

From a 12oz bottle (best buy date 3/9/20) into a pint glass. Pours nearly opaque dark, dark brown with about a finger of light brown head which dissipates quickly leaving no lacing. Smell is dominated by roastiness with vanilla int he background. Taste is more vanilla with roastiness in the background. Neither taste is distinct-a little muddled. Mouthfeel is thin but not detracting from the taste. Overall, this is not a beer I would go out and grab a sixer of, but as a single it's not all that bad.

From a bottle with BB date of Mar. 02 20.
Slightly reddish cola-brown, with quickly-dissipating 1 finger tan head. Slight ring remains after ~30 sec., with no appreciable lacing.

Very Well done Porter!
Starting things off with the look. Poured into my Favourite Tulip glass, results in a deep umber appearance. Not much Head or lacing. Swirl test gets me a slight bit of cap. Moving on to smell. On the nose I get a Classic Dark beer aroma. You can smell those dark roasted malts. Tangy, caramel and cold brew coffee. Hints of vanilla but you have to search for it. Now Let's talk about taste. Top end is semi-sweet. caramel, Coffee and vanilla notes all come together at once. Vanilla is not pronounced. The use of vanilla is what creates the pallet for other flavors to come to the forefront. The use of vanilla in this beer adds a perceived sweet character. the middle is lucious and mildly oaky. the finish is smooth and wet. Now for feel. This beer is smooth all the way through. Creamy texture. Carbonation is medium and so is the body. Overall, A darn Good Porter!

Poured from a bottle into a tulip.

Pours a deep garnet-brown with a quickly subsiding head but good lacing.

Aromas of vague toasted malts and a hint of vanilla. A whiff of chocolate/coffee.

Roasted malts on the tip of the tongue, with vanilla and cola in mid-stream. Nothing offensive but nothing special either. Initially skews sweet. Then the finish is somewhat astringent and metallic with a hint of grassy/floral hop. The flavors are vague like the aromas. There is a general "porter" smell and taste, but no specific flavors.

The brew has a nice medium feel. Excellent carbonation and a drying finish.

It meets the definition of the style in the basic flavors and aspects, but there is nothing remarkable, and it has some odd flavors on the finish.

Beautiful brown color. Smells of bread and malt with a smidge of vanilla. The bottle proclaims this to be a “robust” porter, but it feels much lighter than other porters I’ve tried. Taste is malty, with an extra smoothness perhaps aided by the vanilla. Less pleasant is an aftertaste reminiscent of bread dipped in communion wine which detracts from the taste but you get used to it. Overall, this is pretty sessionable, even though it falls short of craft porters

Snowdrift Vanilla Porter pours a translucent brown color, with not much head. Mellow aroma, but nice hints of warm vanilla. Flavor is full of lots of vanilla flavoring, not much else. Just a little watery. Overall, lots and lots of vanilla, easy to drink, just a little too sweet.

Pretty solid porter. Flavor is super great but still nice. First time having it and it’s definitely enjoyable and I would have again given the opportunity.

Are you kidding me? As good as it gets!!!  A very pleasant Porter and then some! Nice rich dark malt and nice hopping. Subtle vanilla aging adds unique oak-like presence. You can never go wrong with a Leinenkugel's!

I just experienced a light snow slushie on my car this morning. How about a Snowdrift to commemorate? On to the beer:

Looks ruby brown, but a closer inspection shows it's more dark ruby red than brown. Inch thick of head above, which drops into a small lace. It does smell pleasant, perhaps a little better than merely pleasant. The vanilla enchances blackstrap molasses and a kiss of brown sugar.

I drank and the first thing to hit is vanilla. It can get cloying at times, especially as the base porter is mediocre in taste. A dendril of that porter goodness washed with molasses. A pull pint might be asking for too much; a smaller tasting size than that works better for me.

From old, undated notes; had this on draft.

Subtle vanilla in the nose, but not much smell here.

Toffee and vanilla maltiness in the taste; hint of hop bite. Decent.