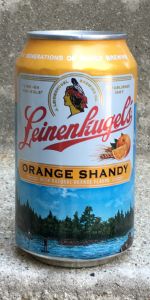 Pours a hazy sunset golden color. Smell was tropical oranges. Taste was very citrus with oranges and tangerine. Mouth feel soft but had an artificial fruit finish. In the summer at a cookout this brew is not bad.

Oh boy. 33cl aluminum can acquired as part of a variety box at a Ralph's grocery in Santa Monica. Reviewed live. Expectations are low. Served into a Uinta pilsner glass in me gaff in low altitude Los Feliz, Los Angeles, California.

Colour is a murky hazy yellow-copper with orange hues. No yeast particles are visible. No bubble show.

A mediocre appearance at best.

Sm: Orange juice. zest. Very artificial and simple. That's all there is. Moderately to notably strong.

T: Orange juice, pilsner malts, minimal floral hp character. That's about it. Very simple. No yeast character or alcohol comes through. There's not much to say about it. Underwhelming. Tangy. A bit doughy.

Mf: Smooth and wet. Thickness is off. Overcarbonated. Subpar presence on the palate. Not all that soft. Not oily, harsh, or biting. Largely unrefreshing. Suits the flavour profile in a general sense.

Dr: Drinkable but boring. I wouldn't get this again. A patronizing summer beer from Leinenkugel. Hides its modest ABV well. I don't really understand the appeal.

This is an outside-the-box beer produced by a brewery in Wisconsin and sold in bottles at your local brew store or supermarket. It has a very bright orange color, and it smells like orange juice. The taste itself is kind of an orange-juicy type flavor, maybe if you put two fingers of bourbon in a glass of carbonated orange juice. After the first sip, you think, "Is this really beer?" But after the second sip, you're thinking that whatever you want to call it, it's pretty darn good.

The beer's best quality has gotta be its smell. It smells like orange juice. So if you have a nagging wife or if you want to have a bottle at work, just pour it into a glass and tell people you're drinking healthy orange juice. It'll be our little secret.

a recreation of their famous lemon shandy, this orange brew lacks the refreshment and easy of consumption that the lemon one has, and seems a little out of season in the winter now, but still isn't a bad brew. it just looks like a light wheat beer, with a pretty decent head on it that doesn't last. the nose is orange heavy, not artificial either, but fresh and pulpy. the fruit part smells nice, but in combination with beer ingredients, it gets a little funny and smells like the base of a barbeque sauce or something. it taste also very orange forward, like carbonated fresh orange juice. I like the freshness of the fruit, but it overpowers any grain or hops and results in a beverage that may refresh some, but falls short of tasting like beer to me, and that's a problem. again, no off flavors here, just too much fruit to still be beer. I really do like the lemon shandy, I think the lemon flavors blend better with the lager, but this one is out of balance. light bodied and well carbonated, a drinkable brew, perhaps better suited for hot weather than pre-thanksgiving frost. maybe I will revisit this in the summer, maybe not.

DISCOUNT BIN BEER! 12 oz can into a glass.

A: Pours a hazy orange juice color. The head is shockingly good; it's about two fingers high, with an eggshell shade. It's texture is amazingly thick and creamy, and retains very well. I'll go easy on the score here, because I imagine this is what one of those fabled Hill Farmstead IPAs look like.

S: Ever know what those little sliced orange candies smell like? Pretty much this. It smells mostly like artificial orange sweetness with a (very minute) side of beer. Very little about this aroma is appealing in any way.

T: The flavors are slightly more beer-y, but not enough to redeem it. Way, way, WAY too much of that artificial orange flavoring comes through to start...and to finish for that matter. It's a shitty orange soda mixed with a mediocre macro lager. Enough said.

M: Well...um...it's light and kind of sweet. The sweetness lingers on the tongue unpleasantly, and it's just a chore to drink.

Thanks to Jeff for tossing me one of these. Figured I'd give it a try - why not? I'll never be "above" anything. Poured from a can into a Lagunita's mason jar. That's got "classy" written all over it. The only thing that would be more perfect would be sitting in an old, rusty canoe out in some stinky ass pond in the middle of nowhere.

It pours kind of cloudy, like muddled orange juice, only with a bit more transparency at the edges which nearly turn to yellow when the light beams through them. The foamy, almost frothy, bone-white head lasts for a minute or two but leaves a bit of lacing as it recedes. The aroma is Orange Kool-Aid. Seriously. Orange Kool-Aid infused with just a little bit of faint grains. And when I say faint, I mean almost completely nonexistent. The smell is not bad at all, just extremely straightforward and boring. Like most Nicholas Cage movies.

It tastes.... like I would expect it to taste. Grainy backbone with more of that "borderline-artificial" orange flavor. It's kind of like an Orange spritzer, thanks to the heavy bouts of carbonation. There is just a little bit of "beer" flavor to this, as the watered down Kool-Aid pretty much masks everything else. Very light bodied with a ton of carbonation - tight, crispy mouth feel and a dry finish.

Eh. What did I expect? Not a lot. And because of that, I wasn't really let down. In fact, I enjoyed this one much more than Summer Shandy and I'm sure this would prove to be extremely quaffable on a hot summer day.

I don't know what it is with Leinenkugel and shandy. Don't they have like five of them by now? What the hell is the difference between shandy and radler? Just looked it up. There isn't one. Move on.

Poured from a bottle into a weizen glass, just so you know.

A: Looks like orange juice mixed with wheat beer. Probably because that's what it is. Given the style, I would expect the head to disappear quickly, but not that fast. The color is dull and a little too murky, but that's expected for wheat beer. Saturation? Hue? I don't know what it is I'm looking for exactly, but the color is missing something.

S: When I sniffed it, I smelled a smell that I expected to smell, so it's got that going for it. Other than that, I would like to have caught a slight floral hop aroma. The orange smell, while overpowering, is quite fresh smelling and adds to the refreshing quality of the beer.

T: Again, the senses stay true to the initial perception that the appearance provided. Unfiltered wheat and orange is exactly what it looks, smells, and tastes like. It's an average, no frills wheat beer base with average, no frills orange juice flavor. Heads up, though, it does kinda taste like how I imagine citrus wood polish would.

M: Slight citrusy sting, but not aggressive in the least. Plenty of carbonation. Light enough to be refreshing, but weighty enough to go with a meal, as long as that meal is a salad. There's also a bit of a waxy post-drink mouthfeel going on here, but fuck, it feels good.

O: If you're trying to watch your figure and need something light to go with a low calorie snack, this beer works. Other than that, it's pretty average on all accounts.

You know, I don't hate this, and I thought that I might.
Sweet orangeade aroma with hints of OJ. Noisy, cloudy orange and foamy white head.
Had bee like qualities. A bit of hoppy bitterness and a little dryness at the end. The orange is more like OJ in the flavor and there is some soft malt character.
Fizzy feel and great fullness from great levels of carbonation (making it closer to soda).
This did have a winter feel somehow, as it seemed to go well with the holidays when I was looking for something lighter and more refreshing.
Thanks Spunky.

Appearance: Quite hazy light orange in color, with almost a resemblance to orange juice. The thick, cloud-top head retains rather well, an abundance of thick, unbroken lacing adorns the glass walls.

Aroma: Sweet orange rind is very prominent in the aroma, as well as a sturdy wheat malt presence.

Taste: Opens with rather prominent sweet orange rind flavors, a touch sweet; these dominate the taste from start to finish. A solid wheat malt backbone supports the orange flavors, ever present, but never dominant. Towards the close, there are some mild hops, which give the effect of bitter orange, and draw the taste to a pleasing close.

Presentation: Packaged in a twelve ounce brown glass long neck bottle with a twist off crown, served in a New Belgium Brewing chalice.

This beer pours a hazy yellow. The nose is reminiscent of orange soda. The flavor is also orange soda like. Maybe is is due to the fact that while I like orange juice, orange soda is a bit less appealing, but I don't find this beer pleasant. The flavors are too artificial, the beer base comes through in an intrusive way, fighting the the other flavors. Just not an integrated brew.

Pours golden orange with creamy head. Aroma is of oranges of spice and reminds of of Christmas. Though not a Christmas beer this is something that would go well with rich holiday meals like ham and keilbasa.

First taste is of rich lightly sweet oranges with hints of vanilla and clove. Finishes crisp and clean and ever so slightly bitter.

Had this on draft at a local restaurant and on bottle. This is good in the bottle but much much better on draft. Good on a cold snowy night with friends. A fun quaffable winter beer.