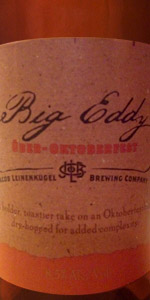 Notes: “O'zapft is!” It is tapped, indeed. Oktoberfest, arguably the greatest festival in the world and the beer that bears its name, was born from a Bavarian royal wedding celebration. We’re paying homage to that celebration with a bolder, toastier take on an Oktoberfestbier that can only be described as “Über.” With a tawny orange hue, toasted malts and spicy hops, our Big Eddy Über-Oktoberfest is then dry-hopped for added hop complexity.
View: Beers | Place Reviews
Reviews: 53 | Ratings: 260 | Log in to view all ratings and sort
Reviews by aklude:

I picked up a bottle of Leinenkugel's Uber-Oktoberfest from their Big Eddy Series a couple weeks ago for $2.79 at The Lager Mill. I've tried all the beers in this series and I thought the Big Eddy series has been pretty solid so far and a Imperial Oktoberfest sounds pretty interesting, so lets see how it goes. Best before February 10th 2014. Poured from a brown 12oz bottle into a snifter.

A- The label looks ok, it's got a clean and classy look and it's the pretty much the same label that all the beers in the series have, it looks ok, but it's not too eye catching. It poured a slightly hazy slightly darker amber color that took on more of ruby color when held to the light with a half a fingers worth of off white head that quickly died down to a thin ring that eventually faded away and it left a little bit of spotty lacing behind. The was a decent looking beer, I thought the color was pretty nice, but the head and lacing were a little disappointing.

S- The aroma starts off with a high amount of sweetness that has a candied sugar like aroma to it and it's followed by a good amount of dark fruits with no single fruit sticking out the most. Up next comes the malts which impart a sweet malt, caramel malt and bready aromas with a noticeable sweet alcohol aroma. Towards the end there's a light herbal hop aroma. This beer had nice aroma, but it was a little on the sweet and boozy side.

T- The taste seems to be similar to the aroma and it starts off with a higher amount of medium sweetness that had a lighter candied sugar like flavor followed by a good amount of malts up front that impart a sweet malt, caramel malt and bready flavor. Up next comes a pretty light amount of sweet alcohol followed by a nice dark fruit flavor with no single fruit seeming to stick out the most. On the finish there's a light herbal hop flavor that imparts a higher amount of lighter bitterness with a sweet, caramel malt and dark fruit like aftertaste. This was a pretty nice tasting beer that seemed to be more balanced than the aroma.

M- Fairly smooth, dry, clean, a little rich, medium bodied with a medium amount of carbonation. The mouthfeel was pretty nice and it worked well with this beer.

Overall I thought this was a pretty nice beer, but it wasn't a great example of a Oktoberfest, but as an Imperial Oktoberfest like they claim it is it's not bad, I don't think I would guess this was an Oktoberfest if I tried it blind, but since I know what it is I can pick out some of those bready and caramel malt flavors that I usually get in the style along with those typical herbal hops, it's just that all those aspects are much stronger, as you would expect from an imperial version of the style. This beer had nice drinkability, it was fairly smooth, a little rich, not to filling, and the taste did a nice job at holding my attention, at 8.5% it would start to catch up on me, but I could see myself drinking a couple of these without getting bored with it. What I liked the most about this beer was the balance in the taste, I got a little worried that this beer would be too sweet and boozy from what I got from the aroma, but the taste turned out to be more balanced than the aroma. What I liked the least about this beer was the appearance and aroma, they weren't bad, but they could use a little work. I would buy a couple bottle of this next year maybe even a four pack, it might be age-able, but it's fairly smooth now so I don't know if age would improve it. I would recommend this to anyone who likes stronger malty beers, but this isn't something that you chug down at an Oktoberfest. All in all I was happy with this beer, Like it said I got a little worried when I got to the aroma, but once I got to the taste I was pretty satisfied and it turned out to be more drinkable than I expected. This Big Eddy series is pretty solid and this beer is no exception, keep up the good work guys, the Big Eddy Series is my favorite thing you guys do.

Pours a dark amber orange with about 1/2 inch head, moderate lacing on glass. Smell is slightly sweet with a hint of pumpkin vegetalness. The taste is delightful and hard to describe, I just know I like it. I get some sweetness, a little spice, and slightly dry finish. It is as smooth as silk going down with just the right amount of presence on the palate. Overall this is one of my favorite Oktoberfests and I will seek it out every fall from here on out.

Enjoyed from a growler, this interesting take on an Oktoberfest pours a BRIGHT, clear, luminous orange with a tight beaded dissipating head of fine bubbles and spotty lacing. Nose of rich bready malts, light herbal hops, and moderate alcohol. Flavors are a malt bomb up front and to the sides...rich caramel notes collide with heavy sweet bread. A light cherry like quality comes through on the back and on the aftertaste with some herbal hop bitterness rounding out the flavor profile. Wet and chewy mouth feel. Very unique, although it could easily be mistaken for a wee heavy or a scotch ale.