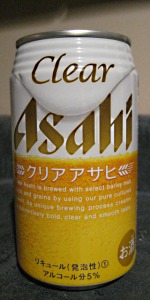 Not much to say. It’s at best a poor Euro lager-knockoff. The aroma (the smell?) of it surely does smell like one and it lightly tastes similar too - and the LIGHT adjective here is very appropriate, the taste fades into a watery, thin carbonated drink very fast.
But it is not BAD, considering that the Japanese made these out of vodka and flavors, it is really similar to a real beer - although it feels blasphemous somewhere to call these “beers” - hey, they are happoshu. Cheap, crap, and make you crave for a real beer.

Pours brilliantly clear with modest apparent carbonation, and a 2-inch head that quickly settles. The nose is sweet grains and reminds me of moistened dried corn husks. Exceptionally light on the palate with virtually no body or lingering. Hints of sweetness. Thirst-quencher, but less than interesting.

What with today being the occasion of New Beer Sunday (Week 654), I have decided to go with an homage to the now-defunct Lauzus Hotel & Bar here in Lancaster, PA. I was vaguely aware of their eclectic selection of imported & foreign beers growing up, but they were prohibitively expensive for us underage beer drinkers. It wasn't until after my first overseas deployment in the Navy & my exposure to Chimay that I got hip to going in there while home on leave or weekends.

From the CAN: Loads of Japanese characters! Man, I CANnot read Kanji, but this is SUCH a cool CAN!

I Crack!ed the CAN open & began a slow, gentle Glug. I was surprised by the quick, unbidden rise of a finger of dense, foamy, bone-white head with moderate retention. Color was Yellow-Gold (SRM = 4 -5) with NE-quality clarity & The Gelt Gang of Croesus, Mammon & Midas suddenly appeared, clad in samurai robes & speaking Kanji! Oh my. I relinquished my hold on the glass and slowly backed away, bowing as I did so. Nose was very faint. lightly sweet, slightly perfume-y, but just what one should expect in the style. Mouthfeel was medium-to-full, big for the style. The taste was light, slightly -sweet, mildly perfume-y flavor with a delicate floweriness. Geez-O, man, this takes me back. My last time was Okinawa in 1992, but this is the kind of beer that I became acCANstomed to during my many visits. Yeah, it was not earth-shattering in its flavor, but it excelled in its subtlety. That was a hard lesson-learned as a street fighter up against martial artists. I was often bested, but after a while, I learned to embrace their style. It was the same way with this beer for a self-avowed, self-described hophead. It was neither malt-driven nor hops-oriented & yet it still brought off a pleasant drink. Finish was dry, very dry & I would not be CANverse to a CANother.

Pours clear light golden yellow.
Very light grain on the nose.
It's really bland, it's a slightly dry carbonated water. I'm glad I tried this beer, I've been wanting the style tick. It's not bad.

A big thanks goes out to Norseman for bringing my last style tick back from japan for me. Pours bright, clear, gold with fizzy white head which dissipates quickly. Nose has strong lagery must, notes of corn, rice, stale grain come through with a faint hint of acetaldehyde. The taste is extremely bland, primarily water up front with some faint stale grain and green apple towards the finish. This reminds me of a cheap adjunct light lager watered down. Mouthfeel is the only redeeming part of this beer... It's uhh... Refreshing I guess. Overall, glad to have tried it, will not try it again!

A: The beer is crystal clear yellow in color and has a moderate amount of visible carbonation. It poured with a half finger high white head that died down, leaving a pillow of bubbles in the center, a collar around the edge, and a thin film of bubbles in between.
S: Light hints of skunk are present in the nose.
T: Similar to the smell, the taste has a bit of skunk flavors along with notes of adjunct malts. A faint amount of bitterness is perceptible.
M: It feels light-bodied on the palate and has a moderate amount of carbonation.
O: This Happoshu seems to be better compared to some of the other beers I’ve tried in the style because it isn’t that skunky.

Clear light straw golden with no real head ... fizzy grainy water ... No "malt" and absolutely nothing resembling hops ... Exactly what expected. Big props to Buckeyeboy for the tick!

Oh boy, another new beer to try here in Tokyo. Poured from a 11.2 oz. can. Has a light golden color with a 1/2 inch head. Smell is dominated by malts. Taste is malty, slightly sweet, refreshing and easy drinking. Feels light in the mouth and overall, while nothing special, is a servicable beer.

Huge thanks to johnnnniee for sending this my way! Last style needed!

A: Pours a clear golden color with a white fizzy head that reduces very quickly and leaves behind no lacing at all. Lots of carbonation bubbles released from the bottom.

S: Just a hint of that skunk, but its gone very quickly. Gives way to a little sweetness and some rice adjunct.

T: Rather bland overall. A little bit sweet malt and some rice. There is a hint of fruit in there, a little apple possibly.

M: Light bodied with medium carbonation, can feel it a little bit on my tongue. Overall it is rather thin though.

O: Nothing really wrong with it, and better than the Japanese rice lagers that I have had thus far. Would be interested in trying more in the style actually, to see if there are any major differences, though I doubt it.

A: Odd carbonation. Not very beer like. More like a sparkling apple juice. Color is a somewhat dull gold. No head.
S: Bready/ricey malt. Definitely ricey. slightly vinegary.
T/M: A sturdy sting of carbonation on the tongue. Refreshing but not particularly flavorful. Oddly enough, I must say that I like it, despite it not being interesting. Although extremely mild, the flavor is nice. If other water beers tasted like this, I would be much more enthusiastic about drinking them. Nothing offensive about it. Almost like tea.
O: Excellent water beer. I wish this was commonly available here, very easy to drink with dinner or whenever.

A friend of mine brought this back from Japan - apparently it's a pretty new offering from Asahi, for the burgeoning 'near-beer' market there. The can says that it's brewed with 'select barley malt, hops, and grains'. It doesn't say how much, but it sounds like beer to me...

This 'near-beer' pours a clear, pale straw colour, with two fingers of thin, soda-pop bubbly head, which dissipates before my eyes, and leaves no lace in its haste. It smells of mild sweet grain, some skunky hops, and a bit of rubbing alcohol. The taste is more sweet grain, kind of a blend of barley, corn, and rice, and who knows what else, with a slight metallic alcohol edge. The carbonation is on the low side, the body medium weight, a tad watery, smooth, and only hints at being cloying. It finishes fairly dry, some mild weedy hops lingering.

Well, this seems very much like a pretty plain, inoffensive lager, and quite easy to put back, which I suppose is the whole point. If the malt bill is that much lower than actual beer, I'd be curious to know what all those much thinner, skunkier 'real' beers out there have going on under the hood.

Clear Asahi from Asahi Breweries Ltd
Beer rating: 67 out of 100 with 34 ratings