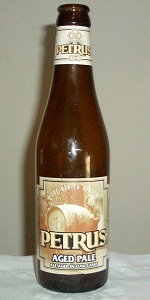 Notes: Petrus Aged Pale is a 100% beer from our foeders. Michael Jackson, the beer hunter, chose the name in the late 1990s – and he was the first to sell this beer in his beer clubs. Today, it is still the reference for sour beers in the US. Petrus Aged Pale has won multiple gold medals in beer competitions worldwide. Moreover, ever since the start of the brewery, the beer has been used as a blending-beer with other beers to give them fresh, slightly sour flavors and aromas.

Aged in Oak foeders for over 24 months

Pours a disturbingly clear yellow, gold with a one finger white head that doesn't stuck around long enough to enjoy the party. The nose is my favorite aspect of this beer.its sour up front with a 7up sweetness it the background. It also has a wooden, unripe apricot smell that I look for in sour beers. The flavor is nice and enjoyable, but it lacks the extreme sour that I have grown to long for. Overall, this is quite a nice beer. I just wish it were a little more aggressive.

My, oh my! Just when I thought I was an obedient beer minion....

I wandered into a tap house in Oceanside, Ca around noon looking for something new to try. After scanning the rather extensive menu of tap options, I noticed the category of aged ales/sours and picked the only one listed. I had no idea of what to expect as I have never tried an aged ale. The word "sour" intrigued me and I was feeling good on vacation and adventurous.

The ale was placed on my table in a thin wine glass with a wide mouth and poured half full. I stared down at about 4 oz of a very pale yellow mystery that subtly scared me. I don't exactly know why it seemed intimidating. Perhaps it was because it was not what I had expected it to look like or maybe I was afraid that I was being watched in part of a gruesome experiment upon unsuspecting patrons that were brave enough to order such a calamity.

There was no head other than a thin ring clinging to the sides. I put my nose into the glass and took a timid sniff. What kind of beast was this?

The smell was funky. Funky as in unrecognizable. Sure the sour note was readily present but there was a strange feeling of being dragged back about 400 years (I'm not kidding). I could tell there had been a war between the physics of nature and time. The quiet battlefield and it's casualties now lay in my glass.

There was no going back. I quickly glanced around to make sure there wasn't a team of medics waiting in case something went wrong and wiped my sweaty palms on my lap.

The first sip revealed the anticipated sourness; a sour with an acidic feel. The intensity very quickly gave way to another realm of complexity; notes of old wood and earth were crisp through the nose after swallowing. My palate danced back and forth between the acidic feel and sour, aged funkiness. The finish was mostly dry akin to a brut champagne. In fact, this brew reminds me of an expensive champagne. The carbonation bites in a rough way but also a little flirty.

This concoction is a "sipper" though it has a very light mouth feel but it is ample in flavor. It can be enjoyed like a blind date with promise. It was served cold but even as the contents warmed a little it remained sassy.

I later found this brew at a local store and it beckons me from time to time. A mistress in a bottle.

Sour dough bread and vinegar on the nose, hazy amber color, small amout of fine lace, minimal head, effervescent, sour on the palate, thin mouth feel. But it's mostly like a sledgehammer soaked in turpentine. So bready, doughy, vinegary, fizzy, resinous, and shockingly understated when you think about everything that's going on here. If I didn't want to drink this, I could probably use it to remove my nail polish. Possible cure for malaria.

Poured from a 330 into a standard pint (the tulip was dirty and I was lazy). The light haze in the gold was lovely. The aroma offered a hint of the sour to come with some citrussy character from a hoppy beer. But the taste was just a wonderful level tartness that was like nothing I had encountered. This is the beer that set me off on a long run of sours. It is therefore my benchmark since it was my first sour. I may revise once I have had more from this style, but this will be a repeat purchase.

Year bottled: 2012 so aged almost 5 years in my cellar
Look: pours pale amber with a half inch of white head that sadly dissipates quickly. it is somewhat hazy at first but clears as it warms.
Smell: fruity and yeasty derived bold sour aromas. mild caramelly malt sweetness. strong horse blanket and even some moldy cheesy aroma.
Taste: a well balanced combo of malty sweetness and powerful sour components. not puckering sour but significantly so. astringency is there but blends well with present bitterness. not getting much from the oak aging which might be there to impart the wild bacteria element and not necessarily flavor.
Feel: medium to med-full body with oily, almost creamy texture. astringency is well pronounced. carbonation is disappointingly light, probably due to over aging. finishes long and sour with a persistent tingling of the palate.
Overall: a decent sour that might have been cellared a year or so too long. still an above average Belgian sour that is still a pleasure to drink!

This bottle has about two years of bottle age, having been waiting patiently in my basement for this meet up.

The beer pours out into a Duvel glass a clear, lightly rich golden color with a 1/4 white head that soon recedes to a ring and thin island of foam. Sipping produces some scattered patches of lacing, most of which slide back down to the beer. While the head is gone before the beer there is still a small ring and a visible bit of carbonation to the end.

The aromas are a complex mix of tartness and lemon-like citrus with touches of some malt in the background. While the oak doesn’t really show when the beer is fresh from the fridge, but as the beer warms in the glass, traces of oak begin to emerge and mingle with the aromas.

As expected from the nose the flavors are tart and citric with some malt sweetness and oak in the background. What surprises is the complexity of the flavor profile in that neither the tartness nor the citric seem to dominate and each seems to have the opportunity to come and go on center stage with background support and a touch of sweetness from the malt. While the oak is initially hard to detect, as the beer warms it also becomes a background player.

The mouth feel is on the light side of medium bodied and there is some faint prickliness from the carbonation. The finish begins in the tartness as everything slowly recedes into the background leaving a slight acetic dryness in the back of the palate and a desire to take another sip.

Overall this is a very well made beer that has a lot to recommend it, both for its complexity and for its smooth gentle finish. I can see myself gladly having this beer again in the future but from the 330ml bottle rather than the 750, which would be too much in an evening, not because of the ABV but because of the complexity of the beer. Also, then half of the beer doesn't need to be recapped to wait for tomorrow night.

Pours a slightly hazy golden amber with a one and half finger head, spectacular retention for a sour, amazing lacing.

Aroma of lemon and lime, slight oak and earth, a little citrusy/acidic fruitiness, some unripe grape.

Excellent sour especially given availability and price. Just so tart and smooth and refreshing. Flavor profile is great too, showcasing several sour fruits and well done malt. An old standby that will never let you down when you crave something sour.

Being a recent fan of sour beers I decided to pick this up for tonight. As soon as I opened it I could smell the brett funk which had me salivating. Pour was a pale golden color with a 1 inch head that laced up nicely. Smell is almost entirely brett funk with a hint of yeast and spice on the end. Taste is once again, fairly sour due to the Brett and a bit peppery, really nice once it warmed up a bit. Mouthfeel is tart and acidic. Drinkability is pretty good, i love sour beers so it was a real treat to get again for me.